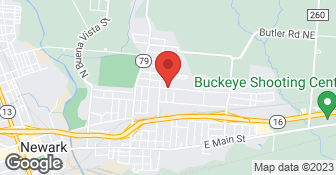 I have been in business for 25+ years i have 6 workers to help get your job done asap.

Bill replaced all of the screens in each of our windows. My husband bought the wrong type of screen, so the screen ended up being really flimsy. Bill came back out and re-screened each window with the correct screen for $50 more.

Description of Work
Replaced the screens in all of our windows.

I have nothing to add

Description of Work
I have nothing to add

He provided the estimate quickly, and agreed to start the job promptly. The price seemed reasonable, and he seemed to have a good plan as to how to proceed. Rather than micromanage, I let him and his helper proceed with the job, but when I came out at one point I quickly noticed that the poles were placed in a way that they would not clear the small fence -- there would be no way to attach the trellis to them. I pointed this out, and he quickly agreed, stating that his worker had not been paying attention. The cement hadn't set, a new hole was dug, and the pole was replaced. I went back to work, satisfied that Mr. Bolton was on top of the job. When I returned later that evening, it was immediately apparent that yet another pole had been badly misplaced. By this time the trellis work had been attached and the cement had set up. The trellis was obviously "bowing" on one side, and it was clear that it would only be a matter of time until the pressure on the trellis would cause it to detach from the pole. And that is now what has happened. When Mr. Bolton stopped by to pick up his check, I pointed out the problem, and he was not pleased. Even though he agreed that the pole had certainly been placed in the wrong spot, he assured me that the trellis would not pull away. He told me that if I was dissatisfied he would redo the job -- for a price!!! I see that the provider posted a response. I know that he is no longer in business, but in case he goes back in business, I want to report that there is nothing in his response that is true at all. There was no "mind changing" on my part, and no request at all beyond the desire to have the job completed as we agreed. Any contrary statement from him is false.

Description of Work
He agreed to build a trellis to enclose (or wrap around) a small fence in my backyard. (I wanted the trellis to accommodate a trumpet vine that I have been nursing along for several years.) The support for the trellis was to be provided by four poles, and the poles were to be mounted in cement to ensure stability and durability.

Jones Topsoil was incorporated in 1924 under the name Jones Fuel Co. 2015 is our 91st anniversary. We sold residential coal for home furnaces in the Columbus, Ohio area. As natural gas became the fuel of choice in the 1950’s we began hauling topsoil, sand and gravel, and limestone for contractors and homeowners. Although our corporate name is still Jones Fuel Co., we do not sell any fuel. Our topsoil has always been of the highest quality because we normally strip topsoil ahead of gravel operations. Our soil is called “sandy loam” topsoil and usually comes from along Franklin County Rivers and streams. We sell three types of topsoil. SoilPlus, which is a blended topsoil, and can be delivered with our Slinger Jones trucks, is normally used for flower beds and gardens. Pulverized topsoil is our rich topsoil run through a large grinder and made easy to work with and spread. That soil is used to level out lawns and fill areas that need built up with soil. Our regular, un-pulverized topsoil is used to fill deep holes, or when the customer is using a skid loader to spread the topsoil. We also sell and deliver high quality mulch, sand & gravel, and limestone products. Because we have so many trucks, we are normally able to deliver on the same day as the order is placed, and normally within a few hours. 40 Employees. Uses subs. Cost is determined by the job. Travel charges apply. DBA Jones Fuel Co. Previous contact - John Jones. Award winning. Additional phone - (800) 867-7645.  …

all jobs just 1 call we do it all

Bill Bolton Handyman Service is currently rated 3 overall out of 5.

No, Bill Bolton Handyman Service does not offer eco-friendly accreditations.

No, Bill Bolton Handyman Service does not offer a senior discount.

No, Bill Bolton Handyman Service does not offer warranties.

Bill Bolton Handyman Service offers the following services: all jobs just 1 call we do it all