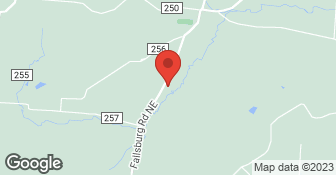 We are a home improvement contractor that stands behind our work. We also stand behind our service and customers find it refreshing to know that when they call, we answer or returm their call VERY quickly! We say what we do and do what we say.

Project was never finished........Advanced construction was to return when the ground thawed to fix excavation that was done incorrectly and reseed lawn. It is now May and have not seen or heard from anyone. All finishing aspects of home addition were not properly done. All drywall needs redone as you can see all seams, tape, nail heads and poor sanding. Workers smoked in home even after addressing the problem with the owner Smokey Ross. When they did decided to smoke outside they put their cigarette butts out on the newly installed composite deck leaving two considerable size black melted burns. My yard has hundreds of cigarette butts in it from workers even though I don't smoke! Flooring in master bedroom closet had 3 large chunks taken out of it due to carelessness and was filled in with a black marker. An area of kitchen floor that was put in new was ruined only a week or so later when they failed to hook the dishwasher drain hose up properly leaving the dishwasher to drain on the floor warping it. Was told it would be taken care of but it never was. The owner Arthur Smokey Ross will not return any of my phone calls, texts, emails or even registered letters sent in attempt to get things taken care of. 8 ft section of flashing on outside of home above door was never installed leaving the bare wood exposed to the elements. Hose connections was never installed like agreed upon. Leaking gutters Owner Arthur Smokey Ross removed a table from my home that he agreed to buy for $300 but refused to pay for, actually refused to even acknowledge the table in countless messages to him requesting payment. I was forced to take him to small claims court to recover the $300.00. I was awarded judgement against him. STAY AWAY from Advanced Construction/ Arthur Smokey Ross. He is very personable and professional in the beginning stages but you quickly learn that he is out only for himself and doesn't care if the job is done correctly or at all. My only option now due to the contract I foolishly signed with Advanced Construction is to hire legal counsel and proceed with mediation. Just more time and money that I don't have to throw into this project. I just wanted what I paid nearly $90,000 for to be completed correctly and any issues to be addressed and corrected in a timely professional fashion.

The Gutter Boys Co. works daily to provide a seamless and enjoyable customer experience. Our helpful sales associates can get you a quote for gutter cleaning right over the phone. If you are looking for seamless gutters or protection, we come right to you, and customize a quote specifically for your home and circumstances. We are never pushy. We like to say that it’s a sales experience that your mom would be comfortable with. The Gutter Boys technicians are tenured and knowledgeable. We are proud to provide a high continuity of service by utilizing employees for our installation services. Our techs are rigorously trained and have received Master Installer status with Valor Gutter Guards, which TGB exclusively installs in the Columbus area and Northeast Ohio.  …

Insured
All statements concerning insurance, licenses, and bonds are informational only, and are self-reported. Since insurance, licenses and bonds can expire and can be cancelled, homeowners should always check such information for themselves.To find more licensing information for your state, visit our Find Licensing Requirements page.
General Information
Free Estimates
Ask for Details
Eco-Friendly Accreditations
No
Payment Options
Check
Senior Discount
No
Warranties
Yes

Advanced Construction & Remodeling is currently rated 5 overall out of 5.

No, Advanced Construction & Remodeling does not offer eco-friendly accreditations.

No, Advanced Construction & Remodeling does not offer a senior discount.