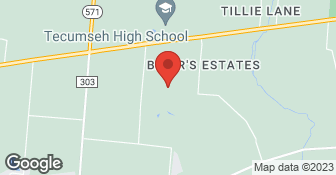 Any Season Property Services, LLC, provides quality work for a fair price. We pride ourselves on customer service.We will not be happy until you are happy with the completion of your next project....

Excellent service. They are very friendly. When we call to ask if they can do things, they are prompt in responding. We feel that they are here to help us and not just take our money.

Description of Work
Mowing and Odd and Ends around the Home

In December we had some plumbers in for major work to replace rusted-out cast iron drain pipes; we brought Randy from ASPS in for an estimate on repairing the holes left behind by the plumbers, and repairing/replacing the damaged ceiling caused by the original leak. Randy actually listened to our concerns, pointed out a few things he was concerned about in the now-exposed kitchen ceiling, and offered a few suggestions which we took into consideration. They carefully replaced a section of wallboard in the bathroom, fixed the subfloor, baseboards, replaced the vinyl flooring, and recaulked the tub--- and their subcontractor that does drywall followed up over the next few days for taping/mud/finish sanding. Second part of the project a few weeks later, they removed the old drop ceiling in the kitchen (below the bathroom), addressed the water damage from the original leaks that started this entire series of projects.... and cleaned up after themselves. (Same drywall subcontractor came back to handle the finishing of the kitchen ceiling.) Overall, we're extremely impressed with the results thus far; we plan to get estimates from ASPS and Randy for future projects as we finish getting this house ready for eventual sale---- they do it all, and as a result they're very busy. I'd rather wait for someone who's stated intent is to do the job RIGHT than some of the other contractors we've had in the house.

At DeWitt & Son’s General Contracting it’s a one stop shop for anything and everything you need done! Electrical, plumbing, water heaters, flooring, kitchen remodeling, bathroom remodeling! No job is to big or to small! I will take on about anything with over 10 years experience In electrical, plumbing and construction work! Im very particular about my work and hold it to the highest standards!  …

Complete Handyman & Honey Do List Service and Repairs. We have the experience and dedication to bring your dreams to reality! We guarantee your satisfaction, and we won’t leave until the job is done right. Call or click to schedule a free estimate today! My company is Veteran owned, meaning I am a Veteran of the United States Army. I treat every customer with the respect that I gave them serving my Great country. I am proud to have served you! Before you did not know my name or my face, but now I want you to see my face and know my name and see that I honor my word for the work that I do for you. I want to make dreams come true! Let me make your life easier, happier or even more safe!  …

Insured
All statements concerning insurance, licenses, and bonds are informational only, and are self-reported. Since insurance, licenses and bonds can expire and can be cancelled, homeowners should always check such information for themselves.To find more licensing information for your state, visit our Find Licensing Requirements page.
General Information
Free Estimates
Yes
Eco-Friendly Accreditations
Yes
Payment Options
Check, PayPal
Senior Discount
No
Warranties
Yes

How is Any Season Property Services LLC overall rated?

Any Season Property Services LLC is currently rated 5 overall out of 5.

What days are Any Season Property Services LLC open?

What payment options does Any Season Property Services LLC provide

Does Any Season Property Services LLC offer a senior discount?

No, Any Season Property Services LLC does not offer a senior discount.

Are warranties offered by Any Season Property Services LLC?

What services does Any Season Property Services LLC offer?