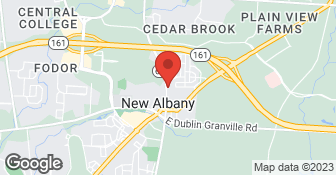 Travis Stevens Roofing was formed to give homeowners in the Columbus area a better option when it comes to picking a contractor. We focus on high-end roof replacements have over 20 plus years combined in the contracting and insurance industry. Whether it's helping a customer recover after a bad storm or just replacing an old roof, we strive to provide our customers with the most stress free experience as possible. We also offer the best product available along with great warranty options at very competitive pricing....

The representative, Tony, stopped by our home as he was in the neighborhood doing door to door sales and asked to inspect our roof. He concluded that there had been storm damage and that we should ask the insurance to replace the roof. We made an appointment for him to come and talk further with us. When he came to this appointment he seemed very rushed. We had several questions regarding whether there were any other damages such as damage to the flashing. Tony kept avoiding our questions regarding this and would divert the conversation to say that the company would be giving us free upgrades such as a 3-D roof. He went on to tell us that the company would not give us an estimate as to what the roof would cost, that this would be up to the insurance adjuster to determine. He wanted us to sign a paper indicating that we were allowing TSR to do the work. However when we read the paper it said that there was an additional sheet of the "contract" that should have been included but they could not produce it for us at that time. We asked that this paper be sent to us via email before we sign anything. At that point Tony abruptly finished with the meeting and would not answer any further questions for us. He stated that he would have Travis, the owner, email the paperwork to us. As he was leaving we asked if he had our email and he said no, and asked that we text the email address to him. As soon as he left I did text him our email. Later the next day I received a call from Tony stating that we would need to contact Travis to talk to him to get what ever further information that we wanted, including the additional paperwork that we requested. We did leave a message for Travis. He did return the call leaving a message for us to call him back. We did try to call again, however he never answers his phone. As we thought about the interactions we became concerned about the quality and integrity of the company since they could not, or would not, produce the paper work that the contract clearly stated should have been included. We left a message with Travis indicating that we would not be using them to replace our roof.

Travis and his crew were very nice, showed up for inspection to identify the source of the problem, as well as other issues in need of attention. But then they decided we needed a whole new roof, and we should get insurance to pay for it. It felt like a scam. The rep was a former adjuster and had a long discussion with me about it, completely disregarding my request for repair. I requested estimates on the repairs to review and said I’d get back to him. Estimate never came. I called, got apologies, no estimate. After several weeks I gave up. I guess they are only interested in my business if I want an entire new roof via insurance claim. So don’t bother unless that’s what you need; other requests are clearly not worth their time.

Description of Work
Roof repair due to water spot on ceiling + inspection for other potential issues.

Great! He inspected everything and pointed our the concerns of someone with a knowledge eye to keeping water out of the house. (gutters, pipe boots, touch-up painting, where fascia needs to be replaced.

Description of Work
I bought this house and if roof was original it was time to be replacing it. Beau Steinman said I had at least ten years left with this roof. He pointed our a couple of maintenance issues that should be looked at. Great information.

Excellent! Beau Steinman answered my questions, seemed to do a thorough job checking out my roof, and addressing those areas that needed some minor repairs to help prevent trouble. I will definitely use Travis Stevens Roofing, L.L.C. again in the future! Beau instilled in me confidence in his knowledge about roofing systems, and confidence in his integrity. Thank you Beau and Travis Stevens!

Description of Work
I had roof maintenance performed.

He did a little repair but not much. He did give us a good feel for when we are going to need a roof replacement. He looked for damage and didn't see much, if any. It was mainly an estimate and an inspection. He gave a thorough explanation of the repairs made.

Great. He showed up promptly. Took pictures of my roof. Warned me that I needed to trim back a tree. Said I would need a pipe boot in a year or two.

Beau was prompt, courteous and professional. He completed the inspection and tune-up to my satisfaction, including identifying and repairing what he felt was the source of the leak, telling me to wait for a couple of rains before I had the inside damage caused by the leak repaired, and that if it wasn't fixed that he would come back.

Description of Work
I purchased the $115 Roof Tune-Up and a Roof/Attic Inspection, because I had an inconsistent leak.

The communication was quick and consistent. They took their time checking the roof, attic and making minor repairs. I let them know that I was concerned about a downspout that had come away from the house and they repaired it as well, though it wasn't a part of the deal I purchased. I was very happy with the quality of the work and the overall professionalism that was demonstrated and I would definitely hire them again.

Description of Work
I was concerned about the condition of my roof, so I purchased the roof inspection and maintenance deal.

I couldn't have asked for better. Travis and Beau came out the day I called them and were on top of things from that time on. The price they gave me was great (keep in mind this will vary based on your own particular situation) and the work was done very quickly. One of the workers even took down an old antenna for me. When the work was done the site was clean, and there were no old shingles or nails on ground. And best of all they always treated me like they were glad to have my business and not like they were doing me a favor. I have another house that will be needing a roof in a few years, and my one and only call will be to TSR.

Description of Work
Replaced roof on a 1200sft house.

The crew was nice, professional and worked hard all day to get the job done as quickly as possible. The company was also quick to respond for a couple of follow up items that needed to be resolved. Very responsive and professional. Would recommend them for any jobs that need done and would use them again if necessary!

Description of Work
We had some roof damage from a windstorm in the area and needed to have the entire roof replaced. Job was scheduled within a couple of days. The crew showed up before daylight and worked all day to finish the roof in one day!

R & M home improvement we do house and driveway power washing. Gutter cleaning and small carpenter work. Like decks and sheds and stuff like that ( WE AREN'T SATISFIED. UNTIL YOU ARE. )  …

All American Home Solutions provides no nonsense solutions to everyday home repairs, services, and renovations. Local, Veteran owned and operated, we are your hometown town MVP when it comes to: Home Soft Washing Deck and Patio Washing Concrete and Driveway Cleaning Other Pressure Washing needs Custom Trim, Cabinetry, & Casework Kitchen and Bathroom facelifts Landscaping And more.. We are proud to offer veteran and first responder discounts. As well as flexible payment methods for those with fixed incomes and emergency repairs needed.  …

Travis Stevens Roofing is currently rated 4.8 overall out of 5.

No, Travis Stevens Roofing does not offer eco-friendly accreditations.

Are there any services Travis Stevens Roofing does not offer?