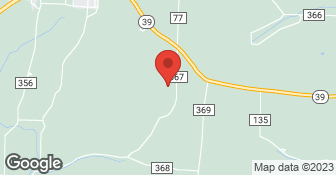 Eco-Seal Home Solutions has been drying up and fixing problem basements all across Ohio for years. We are located in the middle of Amish Country (Holmes County) which has provided us with an employee base that has helped hold a high standard in providing value to you the Customer!! Call us for STRAIGHT ANSWERS, SIMPLE SOLUTIONS

We had chalking around the base of our basement walls. We met the Eco-Seal representatives at a home show and set up an appointment for someone to come to our home to give an estimate for repairs. At the appointment we were told that we needed excavation around the house, waterproofing coating and membrane on the outside of the foundation, then a backfill of rock. We agreed to the process. What was not explained is that the drain tile that was going in the bottom of the trench would be emptying into our sump pump. As a matter of fact, during the process I was under the impression that it would empty into the downspout pipe that drains to the street. When the work was done, we started to notice that the sump pump was running every 10 minutes during rain. Before the work, it ran just a couple of times a year. I chalked it up to the system working to keep the moisture away. This past Sunday, we had a storm. The power went out for about an hour. The sump pump was not working. We bailed water for almost an hour to prevent our basement from flooding. On Monday, we called Eco-Systems and were told that it stated in our paperwork that the drain would empty into the pump. Sure enough in tiny, handwritten print, we found this statement. Now we have gone from having a little chalk on the floor to having the very real possibility of the entire basement flooding in case of a power outage. Tuesday night, after spending the day researching how to resolve this issue, the power went out again. MY HUSBAND AND I SPENT 5 HOURS, 48 MINUTES BAILING WATER AND RUNNING IT UP THE STAIRS IN BUCKETS. The water was coming in so fast, we couldn't stop the process or the sump would overflow. We ended up having a plumber in to install a battery backup sump. This will only work for a few hours during a power outage. We will eventually have to have a generator installed at a cost in the thousands so we can leave for vacations and such without having to be worried the entire time that the power will fail and our basement will flood. Eco-Seal did send out a representative today. He apologized for not having told us about this possibility. I repeatedly asked that he do so for future homeowners. This should be an informed decision on their part. I went so far as to suggest that there be a caution included in the written information given to prospective customers. I hope this company makes some changes based on our experience.

Used Eco Seal to install an egress window in our basement. This was a late add to our basement finishing project and Eco Seal was able to get us on their schedule almost immediately so that we did not delay our general contractor. The entire job took less than a day and the crew was hard working and very professional.

Description of Work
Egress Window in our basement

Hi [Member Name Removed], thank you so much for your kind words. It was a pleasure doing business with you!
2.0

VERY MESSY...Had to go 2 days with out water. They burn out an element on the hot water tank, stripped a value on it. put the water softner back together wrong, left a drain un done. stacked paint cans on my pool table, spilled tea on my pool table cover left glasses lay around . tore the work bench up and never put it back in place . left my new carpet very gross never coverd it completely ....VERY VERY DISSAPOINTED!!!!!!

Description of Work
dug up concrete 18 in wide, put gravel and drain pipe. filled back in with cement. put up walls.

The owner arrived at our home and gave us a great estimate after which we scheduled the job to include new drain lines installed. The equipment was brought out the night before the work began and the men did a great job. They were all very courteous and professional and kept us informed of the progress. They even did some work above & beyond expected.

Description of Work
The company dug along 3 outside walls to the footer and waterproofed them. We were experiencing some seepage into the basement and garage and wanted to get the problem fixed before it got worse.

Hi [Member name removed], Thanks so much for taking the time to write a review for our company. It was our pleasure to work with you!
5.0

Eco Seal Home solutions did a wonderful job, better than we expected! They showed up on time and did the job quickly and efficiently. They are an honest company that does what they say they will do. The crew guys were knowledgeable and friendly . I would definitely recommend this company to anyone needing any basement waterproofing or foundation repairs!

Description of Work
Installed waterproofing membrane and insulation board on below grade foundation.

Thank you so much for taking the time to write this review. it was our pleasure to do business with you !
1.0

Description of Work
after sending them the conformation that I wanted them to do the work, they never contacted me again. I did not follow up because if they were not interested enough to get back with me, I assumed they did not want the job and therefore I was not going to force them to by further contact. I thought they were working for my interest.... I guess that was not so.

It was excellent. Overall, the job was excellent, the performance, the knowledge ability, the workmanship. They went above and beyond what a normal contractor would and make sure everything was done correct.

Description of Work
For waterproofing, I used Eco-Seal Home Solutions.

[member name removed], it was a pleasure working with you, and we are pleased to have provided you with complete satisfaction! thank you for the review!

Insulate My Home is a residential insulation contractor. We provide materials and installation services for all types of home projects with a focus on affordability, quality, and customer service. Whether you’re buying a new home or updating your current house, we’re the experienced residential insulation contractors you can trust. We’ve insulated thousands of homes throughout Ohio & Western PA. Call or click for your FREE estimate today!  …

Ohio Basement Systems, founded in 1999, is a subsidiary of Groundworks, a family of companies that offers superior, proven solutions for your foundation repair, structural repair, crawl space encapsulation, dehumidification, and concrete leveling needs. Ohio Basement Systems is a recognized accredited member of the Better Business Bureau and Home Builders Association of Greater Cleveland. They devote years of experience, industry knowledge and specialized training to help customers protect their homes or commercial buildings from water damage, concrete sinking, and foundation failure.  …

12 time Super Service Award Winner! Full service basement waterproofing, foundation repair and basement finishing company. Locally owned & operated for 40 years. We are bonded and insured with employee labor fully covered under worker's compensation. We are not a franchise nor do we sell a "patented" system allowing us the freedom to take a diagnostic approach to our customers' foundation problems and custom fit solutions to their needs. Best reputation in the industry with Zero Better Business Bureau complaints for history of our company. Award winning. Additional phones - (330) 676-3280, (330) 923-0109  …

Insured
All statements concerning insurance, licenses, and bonds are informational only, and are self-reported. Since insurance, licenses and bonds can expire and can be cancelled, homeowners should always check such information for themselves.To find more licensing information for your state, visit our Find Licensing Requirements page.
General Information
Free Estimates
Yes
Eco-Friendly Accreditations
No
Payment Options
Check, Visa, MasterCard, Discover, PayPal
Senior Discount
No
Warranties
Yes

Eco-Seal Home Solutions, LLC. is currently rated 4.3 overall out of 5.

No, Eco-Seal Home Solutions, LLC. does not offer eco-friendly accreditations.

No, Eco-Seal Home Solutions, LLC. does not offer a senior discount.