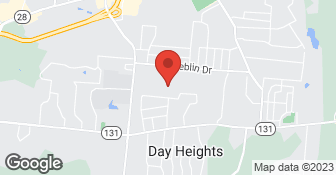 Basement Worx Waterproofing: "Service and stewardship through hard work and honesty" With 10 years experience in the business, I pride myself on my professionalism, as well as my ability to complete each project to the homeowner's total satisfaction. I never leave a waterproofing job unfinished, or a homeowner not completely satisfied with my level of service. Call today

Basement Worx was one of four companies we contacted when we discovered a crack in our foundation. Lonnie came out immediately, provided reassurance without any high pressure sales tactics and recommended their most affordable option. Other companies offered other, more costly solutions so the decision wasn’t easy but Lonnie and his office staff were very patient and answered all of our questions while we evaluated all options. Once we decided to hire Basement Worx to do the job using their epoxy injection method, the work was completed in less than 24 hours! We are beyond thrilled with our excellent experience and highly recommend them for their integrity and professionalism.

[Member Name Removed]- Thank you for giving us the opportunity to work with you! We are happy to hear that you are very pleased with our service. Customer service is our #1 priority for our customers. Thank you again for your business!
5.0

Losing our comfortable finished basement to a flood event in our recently-purchased home was awfully stressful. I had sought quotes from the big waterproofing companies and was further disheartened by unreasonable costs, unnecessary bundled services, and fear-mongering sales tactics. Not being one to be taken by these kind of antics, I continued my search. One of the last companies to survey the damage was Basement Worx whose quote came in at a very reasonable price for exactly what I needed. The crew was on-time, sensitive to my requests, meticulous about quality, and obsessed with a clean basement. I could not have asked for a better experience. A special thanks to Lonnie and the crew!!

It is always a pleasure working with wonderful customers like you. We appreciate your business and the kind words. Our top priority for our customers is to make sure they are 100% satisfied with our price and our quality of work. Thank you!
5.0

Justin and Lonnie were extremely competent and professional. They arrived on time, were careful when bringing the beams downstairs to my basement, and cleaned up not only the basement area, but also my entry way. They also explained everything they did in a language I could understand. During the instillation they discovered two things. First, when needing to adjust where the beams were to go, they discovered they didn't need the 5th beam. That beam would have been installed in my closet, requiring removal of dry wall and possibly part of the ceiling. They could have gone ahead and put it in and I would never have known. Second, after removing one of the studs, they noticed another foundation crack that they hadn't seen during the initial inspection. They sealed it and didn't charge me for it since they were already sealing a couple other cracks as part of the project. Being someone who knows nothing about basement repairs, I really appreciated the fact that they treated me so respectfully. I would recommend them in a heartbeat and hire them again for any future basement foundation problems.

GREAT! Lonnie & his hard working crew were punctual & performed all work in an expedited manner. They went above & beyond to creatively and thoroughly fix my foundation issues. Everyone was very considerate & polite. Their costs are a great value for the work they perform. Basement Worx is a very professional company & I highly recommend them.

Thank you for the kind words [Member Name Removed]! We appreciate you taking the time to leave us a review on Angie’s List. Happy Holidays to you and your family!
5.0

Job went smoothly. Sealed 2 cracks in foundation. Had to demo some dry wall and kept the area clean. These guys were very courteous, friendly and easy to work with. Worked to solve the problem without trying to sell us things we didn't need.

Great, Ronnie and his team was awesome. I had four long cracks along my foundation and they were able to seal them.

Great. They were timely, professional and reasonable. Would definitely recommend!

Very professional and responsive. After they finished the job, one area of new French drain needed attention and Lonnie returned immediately to fix the issue, which he did.

Lonnie was excellent. He provided caring customer service, careful attention to detail, fair pricing, and was willing to go above and beyond to help us get the project done as soon as possible. I highly recommend this company.

EXCEPTIONAL!! Informed Lonnie I need help ASAP as I'm preparing the home for sale. Lonnie said I understand. And believe it or not. Came by equipped to provide the service... After he got out of church on a Sunday. This guy is ambitious and aggressive in providing the absolute best service he can. All that is wonderful, But the price was RIGHT!!! He saved me at least $300.00. Now if that ain't Great I don't know what is. Over all God Bless Basement Worx.

Description of Work
Water leaking into my basement

Lonnie started the instense project by explaining every phase of the install. His crew did a wonderful job working together. The workmanship is superb and i couldn't have a better company than Basement Worx. Justin and Lonnie were friendly. Actually, I am so amazed at the amount of labor goes into a project as this and the efficiency it was done in. HIGHLY recommend! Thanks Lonnie and Justin! (And crew)

It went very well. All the crew was very polite, excellent communication and got the job done correctly. I would highly recommend them to anyone.

Description of Work
Waterproofing my basement

Justin and Lonnie where professionals,they installed curtains around their work and we had very little dust,they worked hard and the products they used were top grade.I would recommend them to everyone that are looking for someone who cares about the customer.they will always be at the top of my list for any job.they clean up their mess.

Thank you [Member Name Removed] for allowing our company to come in and take care of your basement. We enjoyed working along side you.
5.0

The service was excellent

Description of Work
Sealed a crack in my basement

It was good. Very professional

Description of Work
They repair the leak in my garage

They were very profession and on time. It was a good experience.

Description of Work
They redid my basement that had a crack in it. We have no more leaks

It went great! They were professional, honest and fixed our issue almost immediately. They went the extra mile and I would definitely use them again!

EverDry of Cincinnati is a full service basement waterproofing and foundation repair company. Our patented multi-step system is chosen by the vast majority of out customers.  …

The Basement Doctor of Cincinnati

For over 30 years, The Basement Doctor has provided basement and crawl space waterproofing, structural repair, humidity control, and concrete lifting services for Ohio, Indiana, and Kentucky homes with award-winning service. As a part of the Basement Systems Network of dealers, we have exclusive access to over 30 patented products, which allows us to design an effective and permanent solution for every type of wet basement problem. Selecting the right contractor to let into your home is a critical decision. The Basement Doctor of Cincinnati respects you and your home – expertly performing the contracted work, being punctual, employing a drug-free workforce, and skilled, experienced installers. We only use ethical sales practices and honor warranties without hassle. All of our staff follow clear rules of respect, responsibility, and integrity. We treat you the way we’d want our own families treated. ASK ABOUT OUR NATIONALLY BACKED WARRANTY!  …

Healthy Basement Concepts, take every water-related disaster very seriously. Our experts are well-aware of the various damages damp and/or moist surfaces can create, and thus, only utilize professional methods and equipment. Our services are available in Greater Cincinnati, OH and the surrounding areas.  …

Basement Worx Waterproofing, LLC is currently rated 5 overall out of 5.

No, Basement Worx Waterproofing, LLC does not offer eco-friendly accreditations.

No, Basement Worx Waterproofing, LLC does not offer a senior discount.

Are there any services Basement Worx Waterproofing, LLC does not offer?