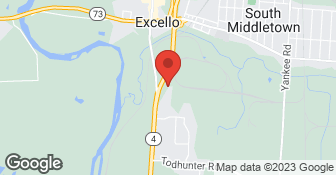 2 EMPLOYEES. USES SUBS. COST IS DETERMINED BY THE HOUR: $50 FOR 1ST HALF HOUR, $30 EACH ADDITIONAL HALF HOUR. NO TRAVEL CHARGE. CHARGES APPLY FOR 24 HOUR EMERGENCY SERVICE.

Patrick was dispatched by my home warranty company to repair a nonfunctioning induction burner for my cooktop. He spent about 5 minutes, charged me the $100 fee for the home warranty and said he needed to special-order a part that would take about 2 weeks to come in. A month later, I have called and left messages 4 times. Nobody answers the phone, and nobody calls back. I have leveled a complaint with the BBB.

How did it go? It didn't go. The gentleman showed up 4 days AFTER we made the claim through our homeowners warranty. We made the claim on a Sunday morning (I wasn't expecting a call that day given it was a Sunday) & didn't hear back until that Monday late afternoon. He proceeded to tell me he was booked all day Tuesday & wouldn't be able to make it out until Wednesday morning, which I was o.k. with. I had given him the run down on what we were experiencing with our freezer/refrigerator & the manufacture & he seemed to know what was wrong & didn't seem to question the problem. Tuesday evening he had called & left a message stating that he couldn't remember the time frame he had given me because he didn't write anything down because he was driving. He wanted to check with me on the time he gave me & to let me know he would be there between 8-12 (which was the original time he had given me) & if there was any problems to call otherwise he would be there sometime between that time. Then he called again the morning of the appointment to confirm I got the message & again stated he didn't write any of the information because he was driving & couldn't remember because he talked to so many people between then & now. He proceeded to tell me that there was 1 other person ahead of me that morning & that I would be the next on his list. O.k. fine. He called again to let me know he would be there within the hour to work on the appliance. Once he arrived he walked in without any proper shoe covering (99% of the time companies walking in someones home always wear protective coverings). Proceeded to look at the freezer/refrigerator & tell me what he originally thought was the problem he does not know if it is or not, that it didn't look like there was a problem since it seemed to be working at the moment. Which I had told him the freezer would freeze then thaw out over & over again during our first conversation. He then went into a long explanation on what the problem could be & why & doesn't know what exactly the problem is (repeating himself multiple times). It could be this, it could be that, it could be this, but with this newer model it couldn't be that, but it could be that!!! He just stood there like he wasn't going to do anything until I told him we are covered under our home warranty & then proceeded to go into yet another explanation of what he warranty company needs in order to cover or replace the appliance, yada yada yada! I then told him he needed to start somewhere to figure out what the problem is. Doing nothing doesn't fix anything! By this time I was tired of hearing his reasoning & excuses & just wanted him to actually do something. So finally he pulled out the appliance, started to look at the back & forgot his flashlight to be able to see, pulled the covering off the back & still couldn't figure out the problem then decided to explain & show me that the side that pulls in the air was covered slightly with dust & that could be, but may not be the problem (of course it was slightly dusty, I do not pull out the fridge every time I clean). Then decided to make a phone call to the other technician to see if he would know what was wrong & if they had a certain part that he could use. He came back stating the guy hung up on him & then didn't answer because he forgot he was in a class between 11 & 12, then he was on a conference call, then he was taking an online course. Whatever excuse (he was coming up with many) he had just wasn't making any sense & trying to make it sound legit & making it worse. He then put back the refrigerator, packed up his little bag & told me once he talked to the other guy to see if they had the part he needed he would call me back to schedule another appointment or he would call my homeowners warranty to have them get someone else out here to do the job. Low & behold he called back a couple hours later & the part he needs is not working so they can not finish the job (surprise, surprise) & that my homeowners have already been contacted regarding the situation. All in all this company has no business being in business!!

Description of Work
The gentleman showed up to look at our refrigerator/freezer.

They did a very nice job. They were able to get to us the same day we called for service. They were very practical and did not over investigate the repair. We spent about $60 on that service. We waited a while.

Description of Work
We used P And R Repairs for appliance repair.

The work was fine, I objected to the fact they don't cover their shoes. The first guy did step on runner, but the last one stepped right onto my carpet. Dirt stains were left that I later had to remove.

I was very happy with his work. He took the problems seriously, worked hard to find the problem and got it running again. He was responsive and polite.

Description of Work
Our dishwasher has been giving us a lot of trouble in the home we just bought. Our home warranty company had a different company come out 3 times, but we were still having trouble, so they sent in P & R for a second opinion. Since it was through insurance, we only paid $55. Patrick pulled the dishwasher out and looked it over. He found that there was some broken glass from the former owner in the spray tower. He also found that the dishwasher was not draining correctly and corrected this problem. A few days later it stopped working again. When I called him, he said his work was guaranteed for 30 days, and came out and got it working.

Even though this was a home warranty dispatched company, they were able to diagnose the problem and fix the problem. The two workers were very professional, and I would call them again for repairs. Very prompt in returning my warranty request for repair. Did arrive late, but called to advise me and make sure it was OK to still come to my home.

Description of Work
The auto-lock would not release after the oven was cleaned (the self-cleaning feature).

We respond with fast, friendly and professional service. We've been taking care of families and their appliances for over 32 years! All Rippe Brothers technicians are EPA Certified and skilled at quickly and accurately troubleshooting the appliance's problem.  …

Fast, friendly, and fair. These are just a few of the words that will describe your experience with Mason TV and Appliance Service. Fast, means that we will be there within 24 hours to address your problem. Friendly, means that our experienced staff is driven by being professional and consultative through every step of the process. Fair, means we will give you the best possible experience that you should expect and deserve. 100% satisfaction is our number one goal that we strive each and every day to accomplish. If you are looking for a company that always has your best interest in mind, look no further than Mason TV and Appliance Service. We look forward to working with you!  …

Bonded
Insured
All statements concerning insurance, licenses, and bonds are informational only, and are self-reported. Since insurance, licenses and bonds can expire and can be cancelled, homeowners should always check such information for themselves.To find more licensing information for your state, visit our Find Licensing Requirements page.
General Information
Free Estimates
Ask for details
Eco-Friendly Accreditations
No
Payment Options
Check
Senior Discount
10%
Emergency Service
Yes
Warranties
Ask for details

How is P AND R REPAIRS overall rated?

P AND R REPAIRS is currently rated 3.8 overall out of 5.

What days are P AND R REPAIRS open?

P AND R REPAIRS is open:

What payment options does P AND R REPAIRS provide

No, P AND R REPAIRS does not offer free project estimates.

No, P AND R REPAIRS does not offer eco-friendly accreditations.

Does P AND R REPAIRS offer a senior discount?

No, P AND R REPAIRS does not offer a senior discount.

Are warranties offered by P AND R REPAIRS?

No, P AND R REPAIRS does not offer warranties.

What services does P AND R REPAIRS offer?

Are there any services P AND R REPAIRS does not offer?