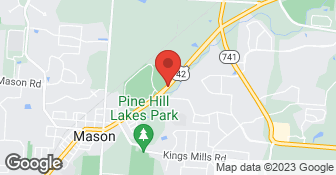 No subs. Cost determined by the job. No travel charges....

I decided to have my house inspected preventatively for termites as it is now 11 years old. Joe was prompt, clean, mannerly and very helpful as he was performing the inspection. He explained what he was looking for and habits of termites and what I could look for as warning signs in the future. There was no evidence of termites at this time, so I did not need to purchase a treatment. I do, however, have a problem with carpenter bees outside and will purchase a dusting product from them for that. I am also considering having them remove the skunks who have taken up residence in my barn.

Description of Work
Whole house inspection for termites was performed. Inside and outside.

Rand came to our home to do an inspection for wood boring insects. He was very thorough, patient, and informative. We've worked with other companies who induce panic in order to get business but Rand gave me the facts and calmed my fears. We will be switching all of our exterminating needs to Extermital!

We called Extermital after a few months of trying to get rids of ants on our own and nothing was working. Within 2 days of them coming out the ants were completely gone. I could not believe the difference. Someone referred them to me. They are well priced and have great customer service. I am a customer for life now.

Description of Work
Treat the inside of the house and outside perimeter for ants.

Our home was found to have bedbugs. The general manager came out to conduct a no charge inspection. He confirmed that we did have bedbugs. He took his time and explained everything he was doing and why was doing it. It was like attending a "Bedbugs 101" class. We scheduled a series of weekly treatments starting on the following Tuesday. A team of 3 men came to the house each week to apply the treatments. After every treatment, we were given a written report of what they found. They would stay and answer all the questions we had (and we had a lot). After the initial round of treatments, we still had evidence of infestation. They came out and did 2 more applications at no additional charge. They offered 2 additional inspections because we had followed every direction they had given us. We just had our inspection after 2 second application and are now BUG FREE! They gave us some suggestions moving forward and suggested we schedule an inspection in 2 weeks to make sure the rascals are gone. I have no idea what their competitors charge for this service and, frankly, I don't care. This company was an absolute pleasure to do business with. From the person answering the phone, to the General Manager, to the men that came to my home, they were all EXCELLENT. They returned our phone calls quickly and were on time for the applications. The thing they did that I valued the most was they took the time to educate us about bed bugs. After every application, they would show us where they found the problems and would make suggestions moving forward of what we needed to do to minimize the risk. Rest assured, if we are ever in need again of an exterminator's services, Extermitol will be the only place we'll call.

Description of Work
Treatment for bedbugs.

I didn't have Extermital do the work, I just got the estimate for their services. It was a good experience. They told me my options, they were very friendly and everything.

Description of Work
They did an estimate to get rid of some ants, some kind of bug.

All described above. Do call them if you need an inspection.

Description of Work
We thought we might have bed bugs at least in our car since we had transported cats from a lady who had them in her apartment. I had some welts that looked like bites the next day. We called Extermital and they came the next day for a whole house and car inspection. The Technical Director completed the inspection of the house and car and said no bed bugs were to be found. He looked at my "bites" and said it looked like shingles (which I have had before). Total cost of his travel and service $0! No charge for an inspection. What great service to get peace of mind!

Description of Work
I used Extermital for pest control to get the termite inspection done probably in July. They gave me an estimate.

They are reliable and they do their job well.

Description of Work
We use Extermital for pest control. We have a contract with them, and they were here two months ago to check the termite traps.

We found out we had bedbugs in 3/2007. Another pest control company did a very poor job of treating them (and we later ended up getting our money back from them!) We still had bedbugs. In June we contacted Extermital. They did an EXCELLENT job of educating us, helping us know what to do to prep for treatment, and treatment. We have been bedbug free for 4 years now! We chose a program where they came every week, then every two weeks, then every month to inspect. Not everyone needs this program but we were happy to pay extra for extra coverage after our experience with the first company that was so poor at treating this problem and so uneducated about it. Extermital was very thorough (outlet plates, etc....) and I would HIGHLY recommend them to anyone dealing with a pest situation!!!

They are very good and they come when they say they will. We are satisfied with their service.

Description of Work
Extermital came in July for regular monitoring.

Integrity Pest Solutions is a family owned and operated company with over 10 years of proven service in Ohio as well as surrounding areas. While Integrity Pest Solutions offers full-service pest control for everything from basic ants to termites and worse, we specialize in safely and discretely exterminating bed bugs utilizing heat remediation with the most technologically advanced equipment in the industry for treating bed bugs. We offer inspections, interior and exterior barrier treatments, and full-scale knockdown treatments. We use commercial grade chemicals that are tested and approved by the EPA. All our staff are licensed and insured. Integrity will solve your pest problems once and for all, not simply try to control them. Licensed by the Ohio Department of Agriculture #100820.  …

Extermital Termite & Pest Control is currently rated 4.6 overall out of 5.

No, Extermital Termite & Pest Control does not offer a senior discount.

No, Extermital Termite & Pest Control does not offer warranties.

Are there any services Extermital Termite & Pest Control does not offer?