Cleveland Ohio glass repair - If you have a problem with broken or fogged up glass in your windows, doors, patio doors etc., you can save money by replacing the glass - no need replacing the entire window or door - broken windows, doors, storm doors and windows, patio doors, mirrors, table tops, shower doors, tempered glass, tinted glass, double and single pane glass, all types of glass repaired and replaced - free estimates - we service all of northeast Ohio - since 1984

Fine. Just what I wanted.

The service provided was professional. The price paid for services was actually lower than other quotes I had received. The response was amazing. Within hours of my primary phone call, the work was finished at my house.

they came out on monday to assess the window - give an estimate - since the qwindow was a double pane lowE / argon window with interior grids between glass , the gentelman informed me that it woul dbe a 5 day lead time to order and manufature the glass unit because it was special order - we did the necesary paper work , gave him a small deposit , and he measured the glas and got it ordered - well the 5 day turnaround actually only eneded up taking 4 days and he had the job done by friday - and it was super fast - he was in and out in 45 mins - start to finish - left my house very clean - washe dthe window - removed the old broken glass and went on his way - very professional , reliable, and curteous . very friendly - overall the job went great - and it was affordable - i have had them do work on my home in the past - replacing foggy glass , broken glass , replacing glass in my patio doors , ....i would defiantely use them and refer them to anyone else in need fo glass work - they have been around for 30+ years and i can see why - they left me very satidfied and happy with the jobs theyve done for me in my home

One window was completed satisfactorily. The second window was installed, and in the process of the installation, my wall was damaged and my frame was not put back properly or level. The frame sustained more holes and caulk than had previously existed. I immediately called the owner of admiral glass. He then sent the 2-man team back to fix the problem. Upon their return, I showed them the problem. The gentleman who I'll call the "lead" installer, was combative, would not admit that the frame was crooked, denied the he caused damage to my wall, and maintained that the nails (holes) were already there. He was incredibly defensive, and then became offensive when he said I was "over-scrutinizing" the work, and that the frame was never straight to begin with(brand new installation, I saw the level myself--it was straight as an arrow). I then asked him if he'd be ok leaving this work at his own house. He never responded. He then "fixed" the problem. To his credit, he sunk the nails, caulked them...better, and ATTEMPTED to straighten the frame. He took the frame off, reassembled it, then showed it to me. It was still crooked. He said that was as straight as he could get it. I wasn't going to have him take it off for a third time, add more holes, and argue further the fact that it needs to be straight. So, I thanked him for at least attempting to fix it, and let him go on his way. He also admitted to damaging my wall right before he left for the last time. Never offered to fix it. I waited until the next day to contact the owner to discuss the problems and how I, and the work were treated. I waited because I expected a follow-up call to check on the situation, it never came. So, I called the owner and voiced my frustration. I let him know that I asked the installer if he could install the window without destroying or damaging the frame. I was perfectly fine with him saying no. I would've made other arrangements. He said, he could, no problem. The owner's response, "why did you install the frame before we could install the window?". First of all, it doesn't matter what I wanted to do, that has no bearing on the level of service I experienced. The installer could've said he didn't feel comfortable with the added variable. I gave him ample opportunity to do so. I guess maybe it is partly my fault because I trusted the installer to do what he said he could do. It doesn't change the fact that the installer damaged my wall and frame. The owner didn't apologize, he didn't offer to repair the damage. Quite frankly, he seemed bothered by the fact that I was even contacting him. This is unacceptable and definitely NOT the right way to treat people let alone, do business.

It went okay, except for three problems. One window had been measured incorrectly and had to be completed at a later time. Another window was not measured or replaced, despite reminding them that it still needed to be done. Finally, they broke a sliding glass door insert and didn't completely clean it up. I had to call them back to do it properly, and when they came, they had a bad attitude about it.

Description of Work
Replaced a number of windows

THE CONTRACTOR DID A GREAT JOB ON THE FABRICATION OF THE DOOR, AND THEY INSTALLED WENT WELL. THEIR PUNCTUALITY COULD HAVE BEEN BETTER. 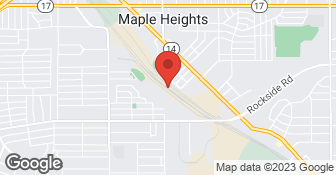 Admiral Glass Company is currently rated 4.2 overall out of 5.

No, Admiral Glass Company does not offer warranties.

Are there any services Admiral Glass Company does not offer?