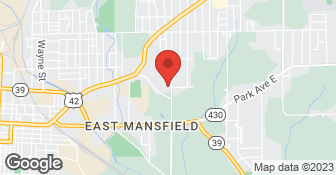 We have been providing residents with heating & cooling services and installation since 1982. Our technicians work year round to make sure we are there when you need us. Call for all your HVAC needs!...

Description of Work
After several attempts to contact, reviewed system for replacement and did not provide an estimate as requested.

Technician was timely and friendly. I received a phone call prior to the appt time letting me know they were on their way.

The technician was late because of tending to an emergency, and there was some confusion among the office, the technician, and me. We straightened it out with no apparent hard feelings, and he proceeded to do a full inspection, which did include fixing one problem he found (described above). After a more than harrowing time with the local company who installed my heating and cooling system, I am pleased to find a competent and honest company for maintenance.

Description of Work
This was a routine maintenance call. Part of the cost was to arrange a service contract beginning with the next appointment six months hence. As I understood it, something was leaking (freon, perhaps?). He repaired the leak and added the required fluid/gas.

Everything done on the service visits has been satisfactory. They explain as they work what they are doing, answer my questions, are neat and knowledgeable. I have no complaints and would recommend them to anyone considering a new system or needing only repairs.

Description of Work
I have used their routine maintenance service from October 1, 2008, until present. Above price included $84.00 for two media filters.On October 16, 2008, Baumberger removed the thermostat that was incompatible with my two-stage heat exchanger (both of which had been installed by another company), and Baumberger installed one that was compatible. Overall they have serviced seven times my heating and cooling system put in by the former company. I consider all their technicians as well as the entire company to be down to earth, honest, trustworthy. They always do good work, are polite, and do not try to oversell.

please referr to my earlyer rekport. thanks you

Description of Work
Good day, I have all ready turned in a report on this company last year. We were very happy with their work. Paul Fisher

Our blower wasn't running on our furnace, so the house wasn't moving any air into the house. I called the last company I had dealt with, who had installed the heat pump when we moved in 4 years prior, before they opened and left a voicemail with them explaining the detail. When they hadn't called back after lunch, I called to talk to them and it was obvious that they hadn't listened to my message. I explained the situation and they said it would be Thursday at the earliest. I went ahead and made an appointment and was hoping they would have a cancellation before. As the day progressed, I decided to shop around. After seeing reviews for Baumberger Heating and Cooling, I figured I'd at least call them. I called them Tuesday AM on my way to work. They said they would have someone over in hours. I asked if they could wait until around 1, so I could work at least a half a day, and they said they'd have the tech wait. An hour later they called and said that the tech had finished up early and asked if I was available. I checked with my boss and headed for home. I pulled in the drive as the tech was pulling in. He asked a few questions, then headed to the basement. He ran a few diagnostic tests and said it was a bad board. He called in to check and got both a price and said they had one available. It took him about 30 minutes to get the part and less to install it and test it. He explained what had happened, showed me the visible damage on the old part, and gave me a few pointers on my system. He gave things a quick check, answered a few questions unrelated to the current problem and rang me up. The whole thing was resolved in a little over an hour, the same day I had called. Needless to say, I waited until the next morning to cancel the other appointment (that was still another day off), and deleted the other company's contact info. Needless to say, Baumberger has a new customer that will be recommending them to others.

Description of Work
Diagnostics to confirm a bad board and replacement of the board. Testing to verify that everything was working properly.

Our furnace quit working and a friend had mention they had this firm work on their furnace last year. After cking in the yellow pages I called several places and Baumbergers was the first to say they could come out that day. We were very pleased with the srvice.

Description of Work
Baumberger's responded within 3 hours of our call. They were able to find the problem of a corroded something, cleaned it and we were back in business. We though the service and the investment were fair.

Baumberger's estimate came in at $800 LESS than another local company for a better air conditioning unit (name brand - Bryant - instead of generic which is what the other company wanted $800 more for!). Dick, the salesman, was very friendly and quick to respond with an estimate; however, the estimate got lost in the mail. When we had waited for 5 days for the estimate, we called and they were quick to send another which we received the next day and accepted. They started work 2 days later! Work was done quickly, they removed the old A/C unit and broke up the old concrete pad it was on and put a new one in it's place. We did have to call them back, however, when we discovered the fan would not turn on in circulate mode. They offered to send the technician out right away (at night, no cost, obviously) but we said the next day was fine. The woman who answered the phones was concerned about getting our technician out to fix the problem quickly and she was very friendly and courteous. The technician came out the next day, identified the problem quickly and was in and out in 15 minutes. The technician explained everything he did to me in detail both times, and was very courteous and was concerned about not being in my way. He even offered to sweep my floor and wipe the dirt up when he was leaving (they were in and out on a muddy day). He also asked to come in through the garage so as not to track as much dirt up and down the stairs to the basement. Overall, an excellent experience with this company. We were extremely pleased with Baumberger and would definitely recommend them for heating and A/C.

Description of Work
Baumberger came in to install air conditioning in our home. Included new line sets, refrigeration lines, power to the unit, set condenser and leveled it, breaking up and removing old concrete pad, checked for leaks, set up thermostat.

All statements concerning insurance, licenses, and bonds are informational only, and are self-reported. Since insurance, licenses and bonds can expire and can be cancelled, homeowners should always check such information for themselves.To find more licensing information for your state, visit our Find Licensing Requirements page.
General Information
Free Estimates
Yes
Eco-Friendly Accreditations
No
Payment Options
Visa, MasterCard, American Express, Discover
Warranties
Yes

Baumberger Heating & Cooling is currently rated 4.8 overall out of 5.

No, Baumberger Heating & Cooling does not offer eco-friendly accreditations.