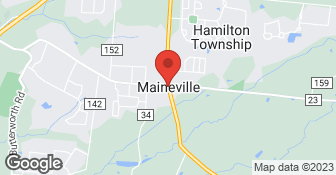 RGV Contracting is your ONE contractor company for all your custom home exterior remodels offering you quality services at affordable prices. We employ experienced tradesmen that provide superior quality with customer satisfaction in mind....

The service was very good and they were great.

Description of Work
They put in new deck at the back of our house.

Great Professional Show up on time and get it done

Disclaimer stated no warranty and no guarantee against settling. There is no way I would agree to not having some warranty/guarantee.

Description of Work
Provided an estimate to build a room addition.

All work done by RGV Contracting is backed by a standard one year minimum workmanship warranty, as stated on any contractor's standard labor warranty: " acts of nature, ground settlement or vandalism " can not be expected to be controlled by contractor. Customer had plans to build a room addition under a standard minimum budget and expects the contractor to be responsible for lot or terrain movement, this can not be expected, all new construction homes settle .Customer never contacted me to address this concerns, she did not even let me know she was no longer interested in my estimate, never heard back from her. Respectfully, Danny T.
1.0

When I discovered that my roof had hail damage, I filed a claim with my insurance company. I was in a vulnerable state when my insurance agent referred me to RGV Contracting. I had never had a roof repaired, knew nothing about roofs, and I had never experienced damage to a home before. In short, I was scared. My insurance agent assured me that RGV would take care of everything for me. The owner of RGV Contracting met the insurance adjuster and the insurance company agreed that the roof needed to be replaced. I was grateful for the help and eagerly verbally agreed to hire RGV Contracting. I did some research to make sure I knew what I needed. I kept asking questions, but I wasn't getting any answers. I waited over 2 weeks for a written proposal that I never received; I was only given vague promises. I was assured that my roof was not leaking. However, I discovered my roof was leaking and a close friend told me of a friend who replaced roofs. This roofer came to my home the very same day and fixed the leak. He prepared a written estimate which listed specifically what I was buying and spent over an hour answering my list of questions. I decided I felt much more confident entrusting my home and safety to him. The owner of RGV Contracting became argumentative when I informed him that I had hired someone else. The owner implied that he would make trouble for me with the insurance company. He told me he had spent money on my behalf and he deserved compensation. He had never ordered materials and he never told me when he would repair my roof. He told me it was unpleasant to climb up on my roof. He badgered me into agreeing to pay him for a repair estimate that he never gave to me! Most if not all roofing companies provide free written estimates. Yes, he did meet with the insurance adjuster who he was very familiar with, but the insurance company agreed to pay for my roof because it was damaged and not because he was there. After 2 weeks of not receiving a bill for the nonexistent repair proposal, he sent my a "2nd notice" with a hand written note demanding immediate payment. He called my home at 11:55 PM. It seems that he bought an Eagle report for the dimensions of my roof instead of measuring it himself. This unpleasant experience has bought to my attention something I already knew; if you don't take care of yourself, nobody will and you will get hurt. Ignorance isn't bliss, making informed decisions is bliss. Even if you feel you are in a crisis, you must take the time to make a rational decision.

Description of Work
Hired to replace my roof but after several weeks he did not provide written proposal for roof replacement.

Very well. RGV contracting is very responsive. We were able to discuss details of the work very easily.

Description of Work
RGV Contracting performed complete replacement of my gutters and soffits, preserving original molding where possible. I am still getting comments on how well it looks.

Had difficulty getting a date that a crew would be available waited about 1week from promised date for job to be started and then a full crew was not available. Also waited on a dumpster to be delivered for roof removal. Workmanship and clean up was excellent once the job was started and follow up afterward for a leak was prompt and professional.

Description of Work
Replaced roof after doing inspection and finding wind damage from storms. Was available when insurance adjuster visited and pointed out damage.

Call us today for all your concrete needs!  …

We do not offer asphalt drive way services.

RGV Contracting LLC is currently rated 4.6 overall out of 5.

Are there any services RGV Contracting LLC does not offer?

We do not offer asphalt drive way services.