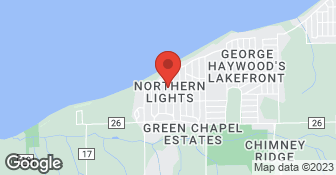 Finding the right people to get the job done can be tricky. Dead or dying trees, loose limbs/branches can be very dangerous for not only the workers but the customers as well. At Orion Tree Services we only have skilled, well-trained and professional guys on our staff. We are licensed, bonded and insured. We take a large amount of pride in our work, and we will not accept disatisfaction.The job is not done until the customer is satisfied. We offer a unique "free climb" service. We opt out of using heavy machinery that can damage the land/property and cause future problems. When heavy machinery is needed, we are skilled in minimizing the machine presence and restoring ground to natural finish. Free estimates 7 days a week!...

Give us a call today for your tree service needs!  …

Here at Junk Tossers LLC, we sustain our business on quality and integrity. We are experts in our trade and are committed to quality from the beginning to the end of your project. We look forward to earning your business. Bulk Junk Removal, Estate and Whole House Clean Out, Storage Locker Clean Out, Demolition, Shed Removal. We offer reasonable prices and scheduling. All work is tailored to the particular needs of every customer. Truck size and equipment are selected per job to save customers money. We help customers clean up and restart their lives moving forward. This is an owner-operated business.  …

Very professional crew removed six large dead or dying ash trees. In addition, they paid special attention to an ornamental red leaf maple that was in need of a thorough trim and shaping. Promptly provided an estimate after first visit and explained in detail what and how the work would be done. Presented proof of insurance when asked. Left the property in very clean condition. They were extremely...

I called the company and they came out the next day for an estimate. I contracted company to take down tree within two weeks, but they could not do it because they were too busy. After three weeks I contracted another tree service. They would not give me back my $302.50 deposit. They said they do not have to refund the deposit and I would have to go to Madison, OH to get my money back. He told me ...

This was a great experience. Jon was prompt responding to my inquiry. We walked the yard together and he explained each of his recommendations thoroughly. His estimate was very reasonable; lower than others I received. We had some rain for a few days and Jon kept in touch with me every day until my yard dried up so that the work could begin. The crew was prompt and before they started work, Jon, t...

Description of Work
Removed shrubs and 4 trees. Pruned approximately 15 trees throughout my yard.

Gave estimate then said needed to contact city about lines running behind the tree. Have talked to him once since then and claimed still waiting to hear from the city. that was 3 weeks ago. Have left several messages and have not heard back from him. Last message I left him was to please return my call or I will be contacting other companies. Still no response. I do not recommend this company.

They kept cleaning up during and after the work was done. They only took a half hour lunch and did an excellent job. I would highly recommend them and would definitely use them again.

Description of Work
They came in with 6 people and removed 2 large fir trees. They also removed long branches of another tree and cleaned it up with trimming.

From our experience with these people they are NOT "customer driven" as their website claims in regard to responding to our requests and questions about the job. They sent an inexperienced estimator who did not write our estimate/contract to say exactly what we wanted done. Then they ignored our requests for a new revised contract. We requested a new contract 3 times by e-mail and twice by telepho...

Description of Work
Trimmed large limbs off 3 trees and cleaned up the cuttings.

Jon came out and gave us an estimate on a Thursday and we scheduled the crew for the following week. He gave us the crew for the entire day, given the number of trees that were to be removed. We have a heavily wooded back yard, and we were glad to hear that Jon uses a climber instead of heavy equipment to cut down the trees. Everyone on his crew was professional and worked hard the entire day. We ...

Description of Work
Removed 8+ trees and thinned out several trees.

Poorly to say the least. The person that we made contact with was pretty much a con-artist. Bragged about never having anyone in the history of the company file a complaint against them and they were BBB approved. Person bragged about having 2 million dollars of liability insurance and that any one of the persons working on the site carried $500 in cash in their pocket to instantly pay the deducti...

Description of Work
Removed tree that was growing in front of deck.

I am happy to write a full review once the job is completed. Both Jon and his colleague were friendly and helpful in talking us through what needed to be done and we chose their service based on their estimate which included free spraying and removal of ivy some time in May. We are still waiting for them to complete the job in accordance with the written estimate.

My husband spoke with a worker passing out flyers (as they were in our neighborhood on another job). Worker was patient and professional. Explained tree health and proposed work very well. Crew doing job was efficient and cleaned yard very well. They ground and disposed of brush. All crew members were professional. Owner was extremely pleasant and caring when he discovered we were stressed with a ...

Description of Work
Evaluated project plus other potential work needs to be done in future. Remove several brush piles including sizable limbs which had previously fallen during 2 - 3 year period.

We offer all aspects of tree service year round and snow removal during the winter months.