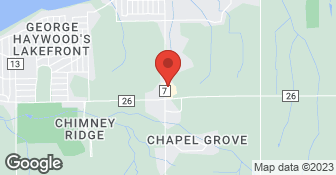 Fred's Appliance will send a factory-trained technician to your home on request and take great pride in our ability to get your appliances back up and running like new. Our professional team has years of experience working on every make and model of appliance from such leading manufacturers as Whirlpool, KitchenAid, Maytag, GE, Frigidaire, Electrolux, Kenmore, Jenn-Air, and countless others....

He was very polite, he was running behind but he called me a couple of times, very pleasant, did and excellent job.

Description of Work
I had issue with my machine they take care of my washer.

They came July 23rd to fixed my problem. They did the actual repair on my washing machine. It was very good. They are a very professional company, Knowledgeable, and called me back when they got the parts. They were able to repair my machine and it is in a good working order now.

Excellent. The person who came out and did the repair knew where the problem was and ordered the parts. He was very knowledgeable, knew where to get the parts, very professional, and courteous.

They did an excellent work, very professional, he knew what he is doing and they communicated well.

Description of Work
They repair a clothes washing machine.

The technician knew immediately what the problem was and fixed it. He noticed that the water turn on/off valve in the basement needed replacing so we had that done by a local plumber. The ice maker works and the refrigerator no longer leaks. My husband and I were very pleased with his professionalism and the speed with which he fixed our problems.

Description of Work
The ice maker in our refrigerator stopped working and a tube in the back of the refrigerator was leaking.

I had hired Fred's in the past to do some repair work on an appliance under warranty, so contacted them when my oven stopped heating. They were able to schedule a technician promptly and he arrived on time as scheduled on a Tues. Technician appeared knowledgable and diagnosed the issue. A part had to be ordered and he scheduled a return on Friday. Part arrived and technician replaced it. Oven seemed to be heating while technician was here. However, later in the day, I was trying it out on various settings and found it still wasn't working properly. Called and technician was scheduled for a return visit on Monday. He found the issue, explanation appeared plausible, but had to order two additional parts. Came back on Friday, replaced the parts and now oven is working fine again. To make up for the frustration of needing four visits to complete the work, Fred's only charged me for the service call, first part and labor to replace it. No charge for the additional two parts. I appreciated that customer service mentality.

Fred's is by far the ONLY company I would use for appliance repairs. They are so wonderful about letting you know when someone will be at your home, without forcing you to wait around all day. Communication is the best I have ever seen with a company providing a residential service. Top notch is the best way to describe Fred's entire process from start to finish!

Description of Work
We had a dryer that kept getting an error code and needed parts.

I contacted Fred's appliance service through their website. They had a technician in our area and he was able to come out same day. He knew exactly what was wrong, had the part in his truck and was able to fix it same day. The drain line coming out of the freezer had clogged and needed to be replaced. Whirlpool acknowledges the faulty part so the part itself is free (paid by Whirlpool). Glad the technician knew all about Whirlpool refrigerators and was able to fix so quickly. He also thawed the freezer enough to get out the layer of ice that had built up.

Description of Work
Our 5 year old Whirlpool bottom-freezer French door refrigerator had ice in the bottom of the freezer and was leaking water out the bottom.

I called whirlpool and Fred's Appliance called with in the same day. I had an appointment within two days. The tech diagnosed the issue and instead of just filling it with Freon and replacing the coolant line, he ordered a new compressor because air may have damaged the one it arrived with. Serviceman said he doesn't like to fix things twice, so he repairs them like it was in his home. Great customer service. Very friendly and knowledgeable. Knew his name and he presented ID when he arrived. We will definitely use them again.

Description of Work
our Whirlpool refrigerator arrived Dead on Arrival.

Called Whirlpool warranty center about problem with washer and had appointment within 2 days. Tech. Paul came out looked at the problem ordered the needed replacement part then came back 3 days later to replace defective part. Tech. was knowledgeable, prompt, and professional. Would definitely hire again.

Please call me with your request for service @ (440) 477-1749. I don't have the luxury of accessing the web throughout the day. I am a one man company. I have been in the industry for over 19 years. I work on kitchen and laundry appliances. If I am not working on an appliance, I am driving or on the phone so please leave a voicemail if I don't answer. I really appreciate all of my customers and I am very gratetful for my Angie's List Customers.  …

Marty's Appliance Service & Sales in Cleveland, OH is a privately owned company. We have been repairing appliances in the Ashtabula and Cuyahoga counties for over thirty years.  …

Not Licensed
Insured
All statements concerning insurance, licenses, and bonds are informational only, and are self-reported. Since insurance, licenses and bonds can expire and can be cancelled, homeowners should always check such information for themselves.To find more licensing information for your state, visit our Find Licensing Requirements page.
General Information
Free Estimates
No
Eco-Friendly Accreditations
No
Payment Options
Check, Visa, MasterCard, American Express, Discover, PayPal, Financing Available
Warranties
Yes

Fred's Appliance Service is currently rated 4.5 overall out of 5.

No, Fred's Appliance Service does not offer free project estimates.

No, Fred's Appliance Service does not offer eco-friendly accreditations.