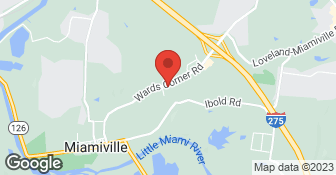 Here at Chimney Care Company, we know chimneys and dryer vents inside and out. We have over 25 years of experience sweeping, cleaning, installing and servicing the chimney and fireplace systems of our neighbors in Cincinnati, southwest Ohio and northern Kentucky, and we pride ourselves on our cleanliness, expertise, professionalism and dedication to customer satisfaction. Whether you need to schedule your annual inspection or are looking for a complete restoration or rebuild, the technicians at Chimney Care Company can help....

It was excellent. Their work was efficient and cleanliness was good. Response time was good and the owner was good.

Thank you for your kind words!
4.0

Went very well. Price was steep to me and they offered no discounts or coupons that could be used for the service. I would find someone else next year that is cheaper or same cost but offer discounts

We hope you will contact us again for your fireplace sweeping. We offer discounts in the spring and summer for our repeat customers.
5.0

Friendly, expedient service! I called Amy on Monday for a quick chimney inspection to support our purchase of an historic home in Milford. Although they didn't have any openings for this week, Amy went out of her way to call the inspector to see if he could do the inspection so the loan appraiser would have the results to consider in our financing decision. We received an inspection the following day and the results are clear and objective, with accompanying information on how we might make any desired updates or repairs. Chimney Care Company was a huge help in our home purchase process and we will definitely work with them in the future for chimney maintenance of our new home!

We hope everything with your home purchase went well. We look forward to servicing your fireplace.
5.0

Very professional and thorough. Excellent job cleaning up after completion of work. Would hire again.

Thank you for your kind words. We look forward to servicing your wood stoves before your next burn season.
5.0

This place is wonderful . So professional and knowledgeable. They came out about an hour after I called. Does it get any better than that! The cleaning took awhile because our vent wanders all over the place but the technician was thorough and patient! Would not hesitate to call again.

Description of Work
We had an extremely long dryer vent cleaned.

We are pleased to know your happy with our service for your dryer vent. We want to thank you for helping him get to the vent from under the deck. It is always good to have a challenge to breakup the monotony. We look forward to servicing you dryer vent in the future.
3.0

As part of the inspection the gentlemen informed us neither chimney was in working order and needed to be repaired. Though he wasn't very clear regarding the issues even though I asked for details. We asked for an estimate to repair or rebuild each chimney. It took several follow up calls to receive only an estimate for one chimney. We never received the estimate for the second. Both the timeliness of the estimate and the size of the estimate made it feel to us as if they would prefer to stick to cleaning and inspections only.

Description of Work
We moved into a new house. The previous owners did not use either fireplace. So we hired Chimney Care for an inspection and cleaning.

In hopes of having our fireplaces working for Christmas, we tried finding someone to do an inspection. I contacted a few companies and no one could fit us in before the holidays (totally understandable). I emailed Chimney Care and they replied within 24 hours. I was shocked to have heard back from them so quickly and was even more surprised that they were also able to fit us in before the holidays. The tech who came out, Michael, was extremely nice and courteous. He made sure to leave his work area clean and he answered any questions we had. I would recommend them.

Thank you for your review and we are glad Michael was able to evaluate your fireplace in a timely manner. The Chimney Care Company hopes you had a wonderful holiday season. Warm regards, Pat Johnston
5.0

The technician was very helpful, friendly, knowledgeable, and professional. He did a great job.

Description of Work
We needed our chimney swept.

"Here is what happened. Draw your own conclusion. I have already drawn mine!". A week before Christmas of 2016, I called The Chimney Care Co. for an appointment to check out my heatilator gas fireplace that had stopped working. I was told someone could not look at it until February 10, 2017. I reluctantly agreed to the appointed time. On Feb. 10, 2017 Shane Johnston, Lead Technician, arrived exactly at the appointed time, so for that only I give an A rating. Shane connected a meter to the pilot assembly and said it was o.k. Then he connected a meter to the valve and said that was NOT o.k. and would need to be replaced. He said he would need to order the valve and would call me with a price. I spoke with Shane few days later. He told me the price of the valve would be $565.00. He also recommended that I purchase a new pilot assembly for $150.00. Total labor for the repair would be $199.00. Total cost for the repair would be $914.00. I asked him why I should purchase a new pilot assembly when he placed a meter on that and he said he got a strong reading and the assembly was o.k. He said the old assembly, although o.k., might not be (compatible) with the new valve, and if it wasn't, the fireplace would still not function, and he would have to return again with the new pilot assembly, resulting in an extra labor cost. I thought to myself, this seems very expensive and more money than I would care to pay for an appliance that wasn't even necessary. I have paid much less to have the home furnace repaired, and the refrigerator. So I went hunting for another opinion, and wow did I find a good one! My second fireplace technician arrived the same day I called him. He checked the fireplace (without meters), and concluded I had a bad (thermo pile), which is part of the pilot assembly. I said The Chimney Care Co. told me I needed a new valve. He thought that unlikely, as in his 26 years of servicing gas fireplaces he had "NEVER" seen a valve go bad. He said in the majority of cases it was the thermo pile, which supplies electricity to the unit. He ordered the part, which he said would cost me $50.00. After waiting a few weeks for the part, my new fireplace technician arrived today, installed it in 15 minutes, flipped the switch and VOILA>> THE FIREPLACE WORKS!! So for $50.00 plus $150.00 labor cost ($75.00 to initially check the fireplace and $75.00 on completion of the work), my fireplace is working again for a cost of $200.00 to my new and forever in the future gas fireplace technician, plus the ($130.00 non refundable fee) that The Chimney Care Co. charged me for diagnosing the problem with my heatilator gas fireplace. >>SO, Shane Johnston, Lead Technician for The Chimney Care Co. said my valve was no good and a new one would cost $565.00. Well, he was incorrect in making that statement. My valve is fine! The fireplace is working as good as it ever did without any valve replacement! Also, my new technician looked up the cost of a new valve for my fireplace and said that if I ever needed one he could get me one for $226.00, $339.00 less than The Chimney Care Co. wanted to charge! Now, why did Shane Johnston recommend I replace the entire pilot assembly, (in addition to the new valve), especially when his meter said the pilot assembly was o.k.? As I previously mentioned, he said the old pilot assembly might not be compatible with the new valve, and if after replacing the valve (alone), the fireplace still did not work, he would then have to return with the new assembly, resulting in increased labor costs. If Shane had suspected the thermo pile was bad, as it was, then wouldn't he know that replacing the valve (alone) would not fix the fireplace, since there was (nothing wrong) with the valve? And if he had known this, could this be why he suggested replacing the old pilot assembly, since it includes a thermo pile, and the thermo pile in the old pilot assembly (was bad), and without replacing it the fireplace would not work upon replacing the valve alone, which was o.k.? Also, a new pilot assembly would cost $150.00, when I really only needed part of it, a $50.00 part called the thermo pile! (On the other hand), maybe Shane Johnston, Lead Technician for the Chimney Care Co., just gave me some very (inexpert) advise regarding the repair of my heatilator fireplace, which did NOT need a new valve or entire pilot assembly!! In conclusion, I paid The Chimney Care Co. $130.00 for a diagnosis, and $200.00 to my new technician to get my fireplace working again, total of $330.00. As previously mentioned, if I had followed up with the Chimney Care Co. for this repair I would have paid a total of $914.00,> resulting in an extra $584.00 more than I did. If I had been lucky enough to call my second technician first, it would have been a total of $200.00 for the repair, >resulting in $784.00 less that what The Chimney Care Co. wanted. i also would have had my fireplace repaired in January , not mid March! As I said at the beginning of my review, "This is what happened. Draw your own conclusion!". I have already drawn mine!!

Mr. [Member Name Removed], Thank you for taking the time to leave us a review, we appreciate your feedback, although I wish you would have reached out to us personally about your concerns. Our goal is always 100% customer satisfaction, so we will be refunding your money shortly along with a Greater's gift card as an apology for any inconvenience we've caused you. I'm glad to hear that your fireplace is working properly now, but I would encourage you to get another opinion on the valve as it tested between .00 between the TH and TP terminals, which indicates a malfunctioning valve.
5.0

Friendly representative that was able to clearly provide me detail of what was performed and possible issues that I may encounter with my fireplace. They also performed sealant work as well.

Thank you for choosing our company for your fireplace needs. We will look forward to serving your fireplace in the future. Please fee free to give us a call if you have any questions, it will be our pleasure to assist you. Warm regards, Pat

LAUGH AT MY NAME AND SMILE AT OUR PRICES CHIMNEY SPECIALIST Owner operator with over 30 years of experience. We have the experience and dedication to bring your dreams to reality! We guarantee your satisfaction because we do the job right the first time. ALL repairs guaranteed for one full year Call or click to schedule a free estimate today!  …

Chimney Care Co is currently rated 4.8 overall out of 5.

No, Chimney Care Co does not offer free project estimates.