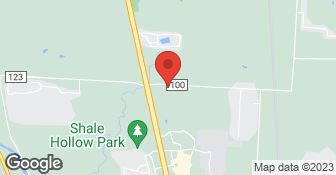 3 EMPLOYEES. USES SUBS FOR ROOFING & SIDING. COST IS DETERMINED BY THE JOB. NO TRAVEL CHARGES. NO SERVICE CHARGES. EXTRA CHARGE FOR AFTER HOURS SERVICE MAY APPLY. MAY CONTACT THROUGH EMAIL.

Description of Work
The provider committed fraud and stole $2,266.50 from me. Ron Reese with All City Roofing required half payment up front for a deposit which I paid him and then he never completed the work that was contracted and agreed upon. He worked at the house for a total of 1-3 hours with mass amounts of work still left to be completed.

We hired Ron to refinish our stamped concrete patio. It was difficult to accomplish this spring with all the rain, but Ron was willing to come out on a weekend to complete the job. He worked hear and removed the sealer from our concrete patio. He came back when it was dry and completed the resealing of our patio. Initially, it looked beautiful! I noticed a few days later that there were multiple areas that did not look good?the sealant had not adhered. I contacted Ron and advised him of the issue and we agreed that we would wait to see if other areas developed the same issue. He indicated that I could contact him when we were ready to remedy the issues. He was very nice to work with!

In general, I found Ron to be a good provider for the roof. The work was done in a timely manner. This is not in dispute. However, he pushed me to pay him in full for the service, which I regrettably did. I wish that I had not paid him until all the services were finished. Since finishing the roof, Ron has not been responsive to my calls or texts except to promise that the job would be done. My last contact with him was in mid-April, during which he promised to complete the work. It is now the end of May and nothing has been done. Overall, I would strongly recommend against anybody using Ron's services, especially if he tries to make promises to do "extra" things to win your business.

Description of Work
Ron Reese contacted me through Thumbtack to fix my roof. In order to earn my business, he promised to install gutter guards and powerwash the house. I agreed to these terms. The roof was completed mid-December. However, since then Ron has not completed the gutter guards and powerwashing of the house despite many attempts to contact him and resolve the issue.

Green Valley Wildlife Solutions is a FULL-SERVICE Nuisance Wildlife Company. From Wildlife Removal, Complete Attic Restoration, and QUALITY Repairs to the Structure, we do it ALL. Services include but are not limited to Raccoon Extermination, Bat Extermination, Bird Removal, Bed Bug Extermination, Attic Remediation, and Wildlife Exclusion. Our goal is to provide efficient, ethical solutions for Wildlife and Bed Bug conflict situations, without the usage of chemicals and unethical practices.  …

How is ALL CITY ROOFING & SIDING overall rated?

ALL CITY ROOFING & SIDING is currently rated 2.8 overall out of 5.

What days are ALL CITY ROOFING & SIDING open?

ALL CITY ROOFING & SIDING is open:

What payment options does ALL CITY ROOFING & SIDING provide

No, ALL CITY ROOFING & SIDING does not offer eco-friendly accreditations.

Does ALL CITY ROOFING & SIDING offer a senior discount?

No, ALL CITY ROOFING & SIDING does not offer a senior discount.

Are warranties offered by ALL CITY ROOFING & SIDING?

What services does ALL CITY ROOFING & SIDING offer?