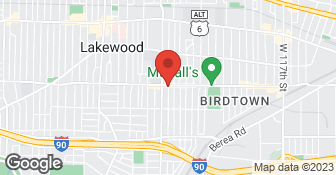 Integrity Windows & Doors serves the Greater Cleveland area from our one location in Lakewood, Ohio.We are a family owned and operated business. We offer windows and doors for every budget and every location in your home or business. All our windows and doors are manufactured right here in Ohio. Since Integrity is a locally owned business we are committed to buying locally whenever possible. We realize local businesses are the lifeblood of our community. When we keep our dollars in the city, every purchase contributes toward our schools, our culture and the well-being of our friends, families and neighbors....

I hired Integrity Windows to replace 40 double-hung windows in a century-old apartment building. Their estimate was the best price I received. The windows and the crew arrived on the date promised. They were very efficient (40 windows in 1.5 days) and courteous to my tenants, who are very happy with the windows. I'm also pleased with the high quality of the work: the trim work, caulking, and cleanup afterwards. Thank you Tim and company for a great job!!!

I needed a storm door for the front of my house and thought it would be a pretty easy process to install - so I planned on just going to Home Depot and having them do it...after they measured they found it was 'too technical' of an install for their skill level. I got in touch with Integrity and they did a great job at giving me an explanation of why the install would be difficult and what they could do. Because of some of the decorative molding around the front door, there would need to be a little bit of customization for the door itself. The owner worked with me each step of the way and set up the measurements, ordered the custom door and install. Jim, who came to do the install, was very nice and was done in about 2 hours - even though it was really cold/snowing outside. From first contact to install was only about 4 weeks which is exactly what the owner said it would be. I appreciate Integrity for their help in the door install and will look to them for future door/window needs.

I had a hinged front door and a sliding patio door replaced at my home this past December. The front door installation took place with relatively few issues. The sliding patio door has been a nightmare the entire time due to Integrity's inability to install a functional product. The first door was shipped to them badly damaged, and they installed it on the rear of my house temporarily (see pictures) because they only realized the damage after they did a rough tear-out of my old door and could not re-install it. During this time, the wood frame of the door which is normally encased with metal was left exposed to the weather for about two weeks during December in Ohio (again, see photo). They returned to re-install a second patio door a few weeks later (mid-December), and by mid-May, both panels of the door had bowed to the point that it would no longer close (additional photo). Their third attempt to install the door failed today when they returned to my home and 'discovered' that the manufacturer had sent them two interior panels, rather than one interior and one exterior panel. They re-installed only the interior panel, told me it would be fine and then left. (The door was still under warranty, so the replacement panels would have been of no cost to them either, other than the time needed to install.) I realized that unexpected issues can arise with work like this, but there is literally nothing I want from this company at this point since they could not do the job correctly given three different opportunities over several months. Wildly disappointing. I am actively telling folks to avoid this company if at all possible. I'm also guessing this review will prompt some contradictory denial from Integrity, but I've tried to restrict this review to verifiable, documented facts.

They are here immediately within the next day to cake of the issue right away. The owner came and inspected the work to make sure that everything is done correctly and they cleaned up after themselves. They worked with my insurance company.

Description of Work
They fixed my backdoor.

Integrity did a great job. No complaints.

Very well. The salesman, the person who measured and the installer, were all very professional.

Description of Work
A new storm door for our back door. Our house is over 100 years old so a custom door needed to be built.

3 for 3 ! We will take that every time ! Thank you for the business and taking the time to post your comments. Cary J. Slabaugh Owner Integrity Windows, Doors & Siding
5.0

Glad your happy with your new door. Thank you for the business and taking the time to post your comments. Cary J. Slabaugh Owner Integrity Windows, Doors & Siding
5.0

They talked about the quality of their products and provided excellent information. We decided that we didn't need to replace the storm doors at this time, but we would be happy to contact this provider for future needs.

It's no always about getting the sale! Thank you for the business and taking the time to post your comments. Cary J. Slabaugh Owner Integrity Window Co. Windows * Doors * Siding
5.0

I hired Integrity to replace an ancient, broken window in my garage with a tempered, obscured glass window for increased security. I chose Integrity over a competing vendor because they took the time to actually send someone out to do the estimate in person, rather than relying solely on photographs. In addition, the pricing was very competitive for the tempered glass. The new window was installed flawlessly and integrated perfectly with the existing frame and siding -- I could not have been happier. The email and phone interactions prior to the installation were also very positive and better than I've had with other contractors.

Description of Work
Replace an old window in my garage.

You forgot the most important part! All this for just 1 windows :-) Who installs one window anymore? Thank you for the business and taking the time to post your comments. Cary J. Slabaugh Owner Integrity Window Co. Windows * Doors * Siding
5.0

On Ash Wednesday my back storm door blew open 3 times from horrible wind. It broke the door mechanism and pulled it out of balance on the frame. I was told I needed a new door. I searched AL and since I live in Lakewood I went there first. I had done some research. I was immediately impressed with the knowledge, suggestions, and information I was given. I decided I needed to look no further! I ordered a green door with a slide in the glass and had a dead bolt put on it. I had to wait 3 weeks but the door was worth the wait. It is solid, well constructed. The man who installed it was here 3 hours getting it just right. My USAA insurance paid for part of it because of wind damage! The installer was on time and helpful. I would give this company an A+ and would definitely recommend them. I liked choosing a local company in my city also. Keep up the good work! A Very Satisfied Customer

Description of Work
I needed a new storm door on my back porch.

24-7 Available Locksmith LLC, is a trusted service when you need the best locksmith in the greater Cleveland area. Our superior service provides you with all your needs from lock replacing or rekeying, fresh dead bolt installations, high security locks from MULTI LOCK. We also offer commercial locksmith solutions, with repair or replace of all major brand locks and crash bars, master rekeying and smart key control that employees cant duplicate. If you lost your car keys, we can have a replacement key made in no time. We can program new keys and remotes. We also fix or replace worn or damaged ignition cylinders like the Ford focus models, GM, Chrysler, Toyota and many more. Give us a call today and talk to an experienced locksmith.  …

Integrity Windows, Doors & Siding is currently rated 4.8 overall out of 5.

No, Integrity Windows, Doors & Siding does not offer a senior discount.

Are there any services Integrity Windows, Doors & Siding does not offer?