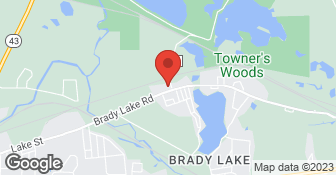 Matt was extremely easy to work with. He made good suggestions for the project but did not pressure us to accept his ideas. He provided a detailed estimate and the final bill came in under his estimate. The work was quickly completed and excellently done.

Of the 4 contractors we interviewed, Matt was the most thorough, taking pictures as we showed him around the house and asking questions rather than waiting for us to give him needed information. He was very patient about working with amateurs in getting the plans to the point where we were ready to start. Working on a modest bungalow built in 1914 involved many surprises. Finding there was no footer under the old foundation, removing an old cistern, digging into an old household dump filled with treasures from the early 20th century, making sense of weird wiring that had been added over the years, reworking heating and plumbing, dealing with city building inspectors, etc. Unexpected delays were the results of monsoon type rain after the foundation had been excavated and the need to change kitchen cabinet suppliers. Through it all, Matt kept things going, and we are very pleased with the results. His employees are the best.

Ground the basement walls to remove paint and to get a smooth surface to apply epoxy, then the sheets, then apply epoxy over the sheets. Crew was very nice and knew what they were doing. It was somewhat noisy during grinding, HEPA filters were used resulting in very little dust. They cleaned up very nicely. I am happy with the work done and think this is an excellent company!

BOB DID A WONDERFUL JOB DESIGNING AND BUILDING BASEMENT STAIRS. THEY WERE PROFESSIONAL. DID A GREAT JOB.

Description of Work
REBUILT PART OF THE BLOCK BASEMENT WALL AND REMOVED OLD RUSTED STEEL STEPS GOING DOWN INTO THE BASEMENT WITH WOODEN STEPS. WATERPROOFED BASEMENT WALLS, AND BUILT OUTSIDE DOOR COVER. BUILT AN OUTSIDE STAIRWELL AREA TO CARRY WATER AWAY FROM STAIRWELL.

GOOD PEOPLE WORK WITH MATT BECAUSE THEY H AVE A LOT OF RESPECT FOR HIM .

I'VE RARELY HAD AS GOOD AN EXPERIENCE WITH A SERVICE PROVIDER IN RECENT TIMES. MATT TESTA IS VERY PROFESSIONAL, AND WAS COURTEOUS AND CONCERNED THAT EVERYTHING WAS DONE RIGHT. A REFRESHING EXPERIENCE!

Description of Work
REPLACEMENT OF DRYWALL AND WOODWORK AFTER WATER DAMAGE ON BATHROOM CEILING AND IN BEDROOM.

I WAS VERY PLEASED WITH MATT TESTA'S WORK AND COMMITMENT. THE QUALITY OF HIS SUBCONTRACTORS WAS EXCELLENT. HIS BILLING WAS DONE EFFICIENTLY AND FAIRLY. HE WAS VERY THOROUGH PLANNER AND KEPT ME INFORMED DURING THE WHOLE PROJECT PLUS HE DELIVERED IT ON TIME AS PROMISED.

100% Right or 100% Free is the way we do business. Plus...we're nice people! Family owned with over 40 years of experience. You can't go wrong when you choose Apollo for your heating and cooling needs. We service and install heating and cooling equipment, boilers, hot water tanks, the new "ductless" mini-splits systems, ductwork and zoning. We offer a regular preventive maintenance program. Our " Value Choice" maintenance plan is widely popular because it is a great value to our customers and their equipment.  …

Check our reviews on Home Advisor and Google Electrical Contractors for all Residential, Commercial, Industrial and High Voltage needs. We are locally owned and operated with over 20 years experience. We provide unmatched customer service. We take pride in our professionalism and cleanliness on our job sites. Call us today for your free estimate! We look forward to doing business with you!  …

Insured
All statements concerning insurance, licenses, and bonds are informational only, and are self-reported. Since insurance, licenses and bonds can expire and can be cancelled, homeowners should always check such information for themselves.To find more licensing information for your state, visit our Find Licensing Requirements page.
General Information
Free Estimates
Yes
Eco-Friendly Accreditations
No
Payment Options
Check
Senior Discount
2%
Warranties
Ask for details

BUILDERS DIVERSIFIED INC is currently rated 5 overall out of 5.

No, BUILDERS DIVERSIFIED INC does not offer eco-friendly accreditations.

No, BUILDERS DIVERSIFIED INC does not offer a senior discount.

No, BUILDERS DIVERSIFIED INC does not offer warranties.

Are there any services BUILDERS DIVERSIFIED INC does not offer?