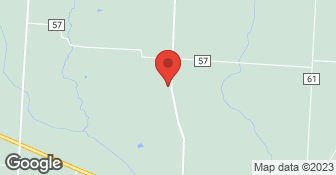 Have only spoke with them on the phone so far. They have not come out to perform service. Filled this out because the it said deadline to fill out was Apr. 2.

Description of Work
They will be doing Lawn Treatments

Weeding is such an inadequate term for what Mark and his team did for us. Due to some family issues, we fell tremendously behind in the weeding out by the street. We have a very large area under two trees with some ground cover, ferns, hostas and the like. It was nit-picky work and there was milkweed, sumac trees, thistles, and clover etc. There were three workers and they spent all afternoon on the job. It It looks so much better! Mark was responsive to my calls, calling me back the same day. He came out and gave me an estimate for the weeding (which was $250) and we scheduled a day for him to come. They showed up the day he said they would. Before the scheduled day, I had called him up to ask him to remove two broken tree limbs. This added on $50, which I had no problem with at all. They worked very hard. I've weeded it before myself so I know just what went into it. I plan on having Mark do some other outdoor work for me too.

Description of Work
Weeded a very large area, cut up two magnolia tree limbs from storm damage, and carted it all away.

Mark has been mowing my lawn weekly since the end of April. He mows/trims/cleans up every Friday (or Saturday). He provides very reliable service.

They have done a fine job. They were engaged by my father and I haven't received the bill from them yet. They are very nice people and know what they are doing. They are not just unemployed people who decided to go into the landscape business. The guy that runs the place and does most of the work has experience and training in landscaping and so he knows what it is that he is doing. The landscape around the house had not been professionally maintained for several years. I asked him to just get in there and clean it up and get things back to the state where you want your healthy plants to be. He knew what to do and he just got in and did it.

Description of Work
I have used Custom Yard Work for basic yard and landscape work such as weeding, pruning and mulching work.

Their work with our lawn and landscaping has been stellar. They replaced old landscaping in both the front and back of our house. They even maintain the landscaping for weeds every time they mow the lawn. I don't have to do anything with the lawn or landscaping as they take care of everything. The owner does most of the work himself and he is extremely courteous. I would highly recommend them!

Description of Work
Custom Yard Work has been taking care of our lawn and landscaping for 5 years. They cut our lawn on a weekly basis in season and have done the landscaping for our house both front and back. They even clean our gutters.

We have used him for several years for many different projects. He does a great job.

Description of Work
He put up our Christmas light. He did the final clean up of our yard.

The day Mark came to put up lights he ran into some adverse winter weather conditions while on the way to my home but pressed his way across town because I had previously told him how bad my wife wanted the Christmas lights up by a certain date. He put up part of the lights but the continuing snowfall prevented him from finishing the job that day and he had to come back a few days later when the temperatures were higher and the snow on the roof had melted to finish the job. He also came back in the spring and took the lights down.

Description of Work
I hired this contractor for a duel purpose. To hang Christmas lights and to clean the gutters while up there.

Mark has taken care of my yard for me over several years. He does an excellent job with both mowing and mulching leaves. He also has trimmed my tree, cleared away tree limbs, and cleaned my gutters of leaves. And the price is very reasonable.

Mark does a great job and can be counted on coming each week.

Description of Work
Mowing and edging front and back yard weekly.

MARK DAVIS DOES GOOD WORK AND THE PRICE IS REASONABLE, GIVEN THAT IT TAKES SOMEWHAT MORE THAN 2 HOURS TO MOW AND TRIM THIS AREA PROPERLY.

Description of Work
MOWING OF A YARD AND FIELD, APPROX 1.5 ACRES WITH TRIMMING AROUND TREES, ETC.

ESTIMATE $60. CALLED LANDSCAPER AND FOUND THAT HE WAS NOT PROFESSIONAL. I DID SOME BACK-UP CALLING AND FOUND ANOTHER LANDSCAPER SO I CALLED HIM BACK AND SAID I WOULDNT NEED HIS SERVICE. HE CALLED ME AND SAID HE COULDNT FIND MY HOUSE. HE WAS COMING OUT TO MY HOUSE, SO HE MUST HAVE NOT RECEIVED THE MESSAGE THAT I DIDNT NEED HIS SERVICE. HE FORGOT MY NAME AND DIDNT GET ALL THE INFORMATION ON MY ADDRESS.

Description of Work
SET UP APPOINTMENT FOR PLANTING BULBS

HES DONE OTHER WORK FOR ME IN THE PAST. I WAS ALWAYS SATISFIED. SO I ASKED HIS PRICE FOR PUTTING IN THIS WEED BARRIER. HE WANTED $400-$500. I THOUGHT THAT WAS OUTRAGEOUS. I FINALLY GOT THE GUY WHO MOWS MY YARD TO HELP ME. HE DID IT FOR $100.

Description of Work
WANTED HIM TO PUT DOWN A SHEET THAT KEEPS THE WEEDS DOWN IN AN 8 X 10 AREA. THEN COVER IT WITH MULCH.

VERY KNOWLEDGEABLE. ONE OF THE ONLY COMPANIES THAT WOULD DO A SMALL JOB FOR A REASONABLE PRICE

THEY DID COME OUT, BUT NOW WONT RETURN CALLS

Description of Work
CALLED FOR ESTIMATE

MARK DAVIES OF CUSTOM YARD WORK DID A FINE JOB AERATING OUR YARD. HE ARRIVED A LITTLE LATER THAN PLANNED BUT WAS DELAYED DUE TO SOME EARLIER PROJECTS. I WOULD USE HIS SERVICE AGAIN.

Description of Work
MARK DAVIES FROM CUSTOM YARD WORK CAME AND PERFORMED AN AERATION OF OUR YARD.

HE DID A GREAT JOB WHILE HE WAS THERE, BUT MEMBER WAS UNSURE OF WHAT TIME HE WOULD BE THERE DUE TO THE FACT HIS WORKLOAD

DID A VERY GOOD JOB, AS USUAL. MEMBERS BOUGHT MULCH AND HE SPREAD IT.

Description of Work
MULCHING AND EDGING

I THOUGHT THEY WERE VERY KNOWLEDGEABLE. EXCELLENT CLEAN UP AND ALL THE WORK WAS DONE TO MY SATISFACTION. I WILL CALL THEM AGAIN FOR YARD WORK.

Description of Work
THEY DID SOME SPRING YARD WORK FOR ME. MULCH, TRIMMED IVY AND TREES, CUT GRASS .

KNOWLEDGEABLE OF GARDENING, PROBLEMS and SOLUTIONS, WILL WORK WITH CUSTOMER

KNOWLEGABLE OF GARDENING PROBLEMS and SOLUTIONS, WILL WORK WITH CUSTOMER'S. FERTILIZED.

HUNG XMAS LIGHTS, DID FINE JOB I EVEN PAID HIM MORE THAN HE ASKED FOR

Description of Work
COMES WHEN YARD NEEDS MOWED AND ETC. NOT JUST EVERY WEEK.

HONEST AND REASONABLE. RETURNED INITIAL CALL PROMPTLY. SHOWS UP EVERYTIME, EVEN TO GIVE AN ESTIMATE. HIGHLY RECOMMEND MARK. HE IS A PLEASURE TO WORK WITH AND KNOWLEDGEABLE ABOUT MANY PROJECTS.

MEMBER FELT HE TOOK TOO MUCH INITIATIVE: AFTER GIVING A VERBAL ESTIMATE, AND THEN HE JUST SHOWED UP AND STARTED WORKING ONE DAY

Green Valley Wildlife Solutions is a FULL-SERVICE Nuisance Wildlife Company. From Wildlife Removal, Complete Attic Restoration, and QUALITY Repairs to the Structure, we do it ALL. Services include but are not limited to Raccoon Extermination, Bat Extermination, Bird Removal, Bed Bug Extermination, Attic Remediation, and Wildlife Exclusion. Our goal is to provide efficient, ethical solutions for Wildlife and Bed Bug conflict situations, without the usage of chemicals and unethical practices.  …

Anything you need, we can do! Inside or out, we offer Gutters, Painting, Drywall, Wallpaper Removal, Carpentry, Decks and Porches, Patios, Windows, Doors, and Fencing, even Pressure Washing! Family owned and operated for over 40 years, We have the capabilities to tackle any project you may have in mind. There is no job too big or small. We treat your home like we treat our own, and look forward to working with you soon.  …

We are a family owned business with customer satisfaction being our main focus.  …

Custom Yard Work is currently rated 4.6 overall out of 5.

No, Custom Yard Work does not offer a senior discount.

Are there any services Custom Yard Work does not offer?