Asphalt Driveways
Concrete Driveways
Concrete Pouring and Repair
Pressure Washing
Licensing
Bonded
Insured
All statements concerning insurance, licenses, and bonds are informational only, and are self-reported. Since insurance, licenses and bonds can expire and can be cancelled, homeowners should always check such information for themselves. To find more licensing information for your state, visit our Find Licensing Requirements page.
Business Details 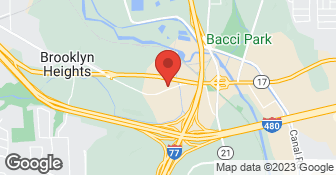 ASPHALT SEAL-COATING. Buckeye Surface Maintenance provides customized solutions to property managers and owners for pavement rehabilitation and preservation. These solutions can be applied systematically to a single location, or to many locations throughout your network....

Elevate property value. Increase comfortability. Create the ultimate outdoor living space. The benefits of our exterior restoration services are endless, and we're more than eager to share our expertise with you. From pressure washing, deck & concrete cleaning/staining/sealing and gutter cleaning, Exterior PRO CLE is the name you can count on to get the job done right. That means working quickly and efficiently so you can get back to enjoying the outdoors again with all of the comforts of home. So, contact us today for a free quote, and see the difference our team can make for you.

Perfect Power Wash, LLC a locally-owned and operated company that values honesty, integrity, and treats your home as if it were our own. We use our 20+ years of experience and dedication to customer service to provide the perfect clean for every customer. In total, our team has power washed over 100,000 Ohio homes and businesses. Our soft wash process and biodegradable cleansers safely remove dirt, mold, mildew, and algae from all exterior surfaces. We utilize best-in-class equipment for every house wash, concrete wash and seal, roof treatment, deck/patio wash, and commercial power washing job. Perfect Power Wash makes it easy for every homeowner to power wash their property. Just give us a call today to get your project started!

I have working with Buckeye since 2012, I have found them to be punctual, fair in pricing and performed good work. But this all changed when I challenged their pricing for the minor work this year. Both Nick and owner Eric yelled at me for failing to agree with their economics of doing business. When I returned the quote for just the sealing, their response was thanks but no thanks, we do not want...

Final product was not as was described. Was told cracks would be filled. Response after work was finished was slow - later found out salesman left company. Had them come back and they confirmed crack filler was never actually used. That charge was waived. They were done with seal cost work for the year, but offered to take another look in the spring. Some areas on edges are pulling up.

Boy has this review been a long time coming. In early 2015, we started exploring the cost, etc. of a new asphalt driveway. Based on positive Angie's List reviews, Buckeye was one of the companies we asked to submit a quote in late March 2015. Initially, we actually selected a different company for the job, but when their price increased substantially for reasons that seemed odd to us, we took a se...

DESCRIPTION OF WORK
Put in a new residential asphalt driveway

I signed a contract in June to resurface my driveway. I explained that I needed the work performed before a specific date in August. I told them I had another quote, if they could not do the work by my date, that I was not going to sign with them. I had a quote from another company who was more expensive, but could meet my date. They told me they were 2-3 weeks out for performing the work. I signe...

DESCRIPTION OF WORK
Signed a contract to resurface my driveway

The work was preformed as indicated on the quote. It was done on time as indicated. They did exactly what they quoted. Eric did follow up after the job.

DESCRIPTION OF WORK
Made repairs to the main parking lot. Removed loose debris.   Patched several bad spots in the lot.