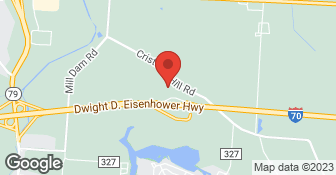 I had Grosse Construction Services build a custom home for me. Let me say that it was a nightmare during the entire building process. In addition we are still finding things that were done incorrectly even 5 years after the build was complete. The first obstacle, our foundation walls were off by a foot in one corner of the house. This caused our porch to be out of square as well. This was patched in a way that did not work, and part of the poured wall needed to be broken out and re-poured. Once that was resolved they framed the home. I monitored the build as closely as I could by visiting it at least every couple of nights. Once the house was framed I found it odd that the house's progress stopped almost entirely. When asking the builder why he said that the County Engineer's office was dragging its feet. So I called the Engineer's office to ask what the issue was. Imagine my surprise when they told me that our builder never got the framing permit, that he framed the house prior to obtaining the permit. They then asked for a meeting immediately. When I met with them they advised me that the supports in the house's basement were insufficient because the company my builder had hired to manufacture the trusses had miscalculated their figures by leaving out the entire weight of our roof! Not following the proper protocol for the framing meant that the house was framed without the proper load bearing in place. What did this mean, they had to cut through our basement floor, dig out the foundations under our supports and re-pour them. Instead of nice slabs of concrete in our basement, we have squares indicating and reminding us of the mistake every time we enter the basement. Not only were the footers not sufficient, but we did not have enough steel support posts in the basement and 2 more had to be added in the most inconvenient locations, breaking up our basement living space. Other issues that occurred, our driveway budget was set at $12k. When I learned we were at $15k I asked him why he was so far over budget and said I didn't want anything else done to the driveway. At the conclusion of the build I find out that my total bill for the driveway is $18k, $3k more than when I told him to stop putting more gravel down. I would think a builder would possibly clear such cost additions prior to making the decision on his own. When this builder says it is a 1 year warranty on the house, they mean it. If anything, anything at all, goes wrong after the 1st year, don't expect them to fix anything. Two years after the house was built we could not figure out why so many of the Asian beetles (those orange lady bug like insects) were getting in our home. I started investigating further and our framed walk out basement wall was the culprit. The builder did not properly seal the cracks in the walls. What did this mean? Our basement walls were filled with thousands and thousands of these insects. We were literally vacuuming them out of the walls by the gallon. When I contacted them it just wasn't their problem. Within 2 years many sections of our drywall tape have released from the walls. We are still finding corners of the house and pieces of trim that were not painted completely. Here we are 5 years later and since the conclusion of the build we have had our custom tile shower has an ongoing leaking problem which they will not fix even though I have had two separate professional plumbers say it could only be cause by incorrect installation, our water tank has sprung a leak, I have found a short in a light caused by incorrect wiring techniques (the short literally arc cut a hole through the fixture), our fireplace hearth and fire box were incorrectly installed (there is a gap between the two that they filled with hi temp silicon that dries ups, becomes brittle and falls through to the foundation), paper is still stuck under the baseboard of the house where they were too lazy to remove it when they were attempting to protect our hardwood floors, literally the list goes on and on. I believe one of my most disappointing experiences with this company occurred when I walked into the house one day and heard one of the owner's criticizing and making fun of one of my decisions to his work crew. If he did not like a decision of mine he could have come to me and spoke to me about it, instead he was degrading me in front of his crew. Not very professional since my wife and I were the ones paying all of their salaries. I could not in good conscious recommend this builder to do any job. If you enjoy constant headaches, stress, and the constant thought of "what next", go ahead and hire them. If you want a contractor that stands behind their work, does not spend money without consulting you first, follows the protocols of the county engineer's office, and respects the person they are working for I strongly recommend you look elsewhere.

Description of Work
They built a custom home for my wife and me.

Jones Topsoil was incorporated in 1924 under the name Jones Fuel Co. 2015 is our 91st anniversary. We sold residential coal for home furnaces in the Columbus, Ohio area. As natural gas became the fuel of choice in the 1950’s we began hauling topsoil, sand and gravel, and limestone for contractors and homeowners. Although our corporate name is still Jones Fuel Co., we do not sell any fuel. Our topsoil has always been of the highest quality because we normally strip topsoil ahead of gravel operations. Our soil is called “sandy loam” topsoil and usually comes from along Franklin County Rivers and streams. We sell three types of topsoil. SoilPlus, which is a blended topsoil, and can be delivered with our Slinger Jones trucks, is normally used for flower beds and gardens. Pulverized topsoil is our rich topsoil run through a large grinder and made easy to work with and spread. That soil is used to level out lawns and fill areas that need built up with soil. Our regular, un-pulverized topsoil is used to fill deep holes, or when the customer is using a skid loader to spread the topsoil. We also sell and deliver high quality mulch, sand & gravel, and limestone products. Because we have so many trucks, we are normally able to deliver on the same day as the order is placed, and normally within a few hours. 40 Employees. Uses subs. Cost is determined by the job. Travel charges apply. DBA Jones Fuel Co. Previous contact - John Jones. Award winning. Additional phone - (800) 867-7645.  …

Mosby Electric is a full service electrical company that meets all of your residential electrical needs. In addition, no job is too small. We "get you wired right."  …

ALL TYPES OF RESIDENTIAL AND COMMERCIAL WORK.  …

Grosse Construction Services LLC is currently rated 1 overall out of 5.

No, Grosse Construction Services LLC does not offer eco-friendly accreditations.