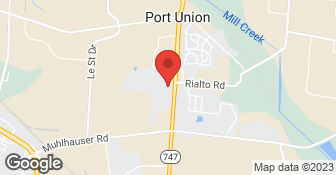 The garage door would not close. The technician that came was Paul and he determined that a cable had broken. He made the repair and reset the error code message on the opener. Paul was very efficient and customer friendly.

The service was okay, however he did not write the keypad on the contract.

It went quite well. Remotes were coded to door and keypad was rekeyed to new code. Problems were resolved in less than 15 minutes.

I had a negative experience with this company and was frustrated and confused by the way they treated me. I initially called during business hours (around 10:00am on a weekday) to report my problem. I indicated that I needed to have service that same day, but that I couldn't do it during business hours because of work obligations that day. The person on the phone in their service department told me she could schedule me in for emergency service that evening, which I accepted. She said that a technician would call me between 5:00pm and 6:00pm that evening to indicate the time they would arrive that night. I waited by the phone at the appointed hour, but no one called. Around 6:05pm I called their number and spoke with their emergency service representative. He said he would contact the technician on call to see what was going on. Still no response. I called again at 7:05pm, only to be told by yet another representative that a new emergency ticket was being put in because supposedly there was none on record. Only at that point did I receive a call back from the on-call technician, who finally showed up and completed the repair around 8:00pm. The technician had no record of anything I had been told back at 10:00 in the morning. I was frustrated by the poor communication, the constant run-around, the waiting, and the different answers I got every time I called back to check in. I imagine that the repair they completed is sound, but the customer-service experience was horrible.

Description of Work
Minor repairs to a residential garage door mechanism involving replacement of the springs and safety cables that had broken loose.

JD went above and beyond. He was very knowledgeable, thorough and patient.

Description of Work
The garage door spring was broken, and JD replaced it. The light wasn't working and he fixed that. He put a new garage door opener box on at no cost.

Technician showed up on time and performed repair as promised. Really did a nice job with the repair and went above and beyond by tightening up other screws to reduce noise upon opening and closing. Excellent service.

Our previous garage door was wooden and have a grate underneath it. Our garage door was curved so it would fit with the grate. The new one was steel and didn't fit. There's now a big gap at the bottom. They didn't tell us it was going to be like that. We don't have a way of keeping water and small animals out of our garage. The installer acted like, "Well, of course you should have known that." The salesman who came out to measure never told us anything like that. Also, with it being a new garage and our house being older, it doesn't fit really perfect, so it's harder to move it up and down than our old garage door was. So it's difficult to get in and out of the garage. They also didn't mention that it would be harder to get in and out and go up and down with it being a steel door. They said part of the reason was the new rails were meant for newer houses and we had a house built in the 1930s. They don't make quite the same radius of a turn in older houses than they do in newer houses. So they had to bend the rails more and that causes the garage door to get stuck. I really didn't like that they didn't seem to know what to do with an older house. They also told me it was going to be half day job and they would come out in the morning. I only had a half day off work, and they called and said it was going to be 11:00. They said they come out at 11:00 and finish in mid-afternoon. That wasn't explained to me. They've fixed the garage door some, but it's not nearly as smooth as the old garage door was. I thought it was weird, that a new garage door is going to be harder to use than an old one. They tried to fix the gap at the bottom by putting in a larger piece of plastic at the bottom. Logistically, it was a pain, between having to schedule a couple of different times for them to come out and then a couple of times so they could look at everything and fix everything. They didn't have their customer service worked out well. They were responsive about coming to the house, but weren't upfront about when they were coming. They had rescheduled twice.

Description of Work
They installed a new garage door.

They are fast, quick and come out very quick. I called and they were out within a couple of hours.

Description of Work
We had some springs that were coming apart and they came out and repaired it.

I was really pleased. I chose them because my door was from Overhead Door. I just called their service department.

Description of Work
For the garage door, we used Overhead Door.

They did a good job. They used what I had instead of trying to sell me new parts. He repaired the ones I had. The garage doors work fine. They were a little bit late.

Description of Work
They repaired the garage doors.

At Construction Solutions Home Improvement we treat your home as if it were our own. For over 14 years we've been serving the Greater Cincinnati and Northern KY areas. Tom Bolt, owner/operator, has more than 35 years experience and has helped hundreds of customers with small repairs all the way to large additions and remodeling projects. Call us today for your free estimate.  …

We are a small, family owned business with 10 employees. We have a fantastic install crew that does every one of our jobs. We rely on offering great installs at a consistent and reasonable price. 12 Months 0% financing is available to qualified buyers.  …

Insured
All statements concerning insurance, licenses, and bonds are informational only, and are self-reported. Since insurance, licenses and bonds can expire and can be cancelled, homeowners should always check such information for themselves.To find more licensing information for your state, visit our Find Licensing Requirements page.
General Information
Free Estimates
Ask for Details
Eco-Friendly Accreditations
No
Payment Options
Check, Financing Available
Senior Discount
10%
Emergency Service
Yes
Warranties
Ask for Details

How is Overhead Door Co of Greater Cincinnati overall rated?

Overhead Door Co of Greater Cincinnati is currently rated 4.7 overall out of 5.

What days are Overhead Door Co of Greater Cincinnati open?

No, Overhead Door Co of Greater Cincinnati does not offer eco-friendly accreditations.

No, Overhead Door Co of Greater Cincinnati does not offer a senior discount.

Are warranties offered by Overhead Door Co of Greater Cincinnati?

No, Overhead Door Co of Greater Cincinnati does not offer warranties.

What services does Overhead Door Co of Greater Cincinnati offer?