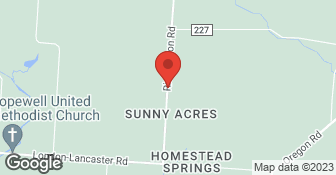 We are a family owned and operated company out of central Ohio. We are licensed, bonded and insured to deliver you the highest quality of work with any of your exterior needs. We employee in-house crews as well as multiple sub-contracted crews to ensure your work will be completed in a timely manner. We provide free estimates and reliable warranties. Please call our office to discuss financing options for your next big project! 614-929-867

Fantastic communication! They were a pleasure to work with . And the craftsman ship was just a good! Thanks again guys!

These guys were amazing. I'm a contractor myself and almost never trust anyone to do a home project of mine. The adage "of u want something done right you've got to do it yourself", absolutely does NOT apply to the AZ crew. They did impeccable work. We're always on time. Fast and friendly. My fence is as good, if not better, then if I would have done it myself. Will def be calling them from now on for all kinds of things. Thanks again.

Description of Work
Had a fence installed

the envy of the neighborhood

Description of Work
they built me a fence

Lowe's selected them to install the vinyl fence we purchased. There were numerous problems, including installing a clearly broken fence post (which had to be torn out and replaced) and a damaged gutter downspout (which they denied at first). Also, they left a huge mess and did not attempt even a token clean-up effort, leaving it for me; then they failed to show up when promised to install the gate latches. Worst of all, they either pulled or buried in concrete the lot line pins, which created an issue when there was a subsequent property line dispute. When contacted, they refused to do anything about it, telling me I had to contact my surveyors to come back out again (at my expense) and pay them a second time to mark the pins!

Description of Work
Installation of a vinyl fence

We hired Lowe's to install a fence. A:Z was the subcontractor who did the work. They showed up on schedule and began demolition of the old fence. After the old fence was down, they presented my wife with a liability waiver document, saying that they could not proceed without the waiver. KEY POINT: The old fence was demolished and damaged beyond repair. There was no opportunity to turn back. In their work they damaged a main transmission line for one of the cable companies. We received a bill for $1619.17 for the repair work. Zack immediately replied with the release of liability and refused to pay. The facts are: 1. A:Z clearly does not have appropriate insurance. This damage should have been covered by their general liability insurance. 2. A:Z is unethical - presenting a waiver of liability AFTER the work had been started and there was no opportunity to turn back. I would not hire them under any conditions. If they were to show up as a subcontractor, I would contact my contractor and insist on a different company.

They were real good. They did little change and they were here when they said they would be. They went to the wrong house at first because. someone gave them the wrong address.

Description of Work
A:Z Contracting put in a new fence.

Hi we are a small business that has over 25 years of experience we specialize in all types of concrete from your standard driveway, sidewalk, or patio to a more decorative stamp style cement. We can design outdoor kitchens to meet your needs and budget. We can also do concrete countertops also to complete your outdoor kitchen look. Hope to hear from you soon and hopefully to schedule a start date for your future project  …

Gutter Masters, LLC is a fully insured and licensed gutter installation, gutter protection, and yard drainage specialist company serving Central Ohio. We are an owner operated company with more than 20 years in the industry.  …

The Gutter Boys Co. works daily to provide a seamless and enjoyable customer experience. Our helpful sales associates can get you a quote for gutter cleaning right over the phone. If you are looking for seamless gutters or protection, we come right to you, and customize a quote specifically for your home and circumstances. We are never pushy. We like to say that it’s a sales experience that your mom would be comfortable with. The Gutter Boys technicians are tenured and knowledgeable. We are proud to provide a high continuity of service by utilizing employees for our installation services. Our techs are rigorously trained and have received Master Installer status with Valor Gutter Guards, which TGB exclusively installs in the Columbus area and Northeast Ohio.  …

At A:Z Contracting, we specialize in all of your fencing and decking needs. We are known for our superior craftsmanship when it comes to all wood, vinyl, aluminum, composite and chain link installs. We work hard to help design your vision according to Home Owner Association regulations, as well as any County, City or Township Zoning Ordinances. We take the guess work out of your roofing, siding and concrete needs- so that you can create an outdoor area to build memories of a lifetime.

A:Z Contracting, LLC is currently rated 3.7 overall out of 5.

No, A:Z Contracting, LLC does not offer a senior discount.

No, A:Z Contracting, LLC does not offer warranties.

A:Z Contracting, LLC offers the following services: At A:Z Contracting, we specialize in all of your fencing and decking needs. We are known for our superior craftsmanship when it comes to all wood, vinyl, aluminum, composite and chain link installs. We work hard to help design your vision according to Home Owner Association regulations, as well as any County, City or Township Zoning Ordinances. We take the guess work out of your roofing, siding and concrete needs- so that you can create an outdoor area to build memories of a lifetime.