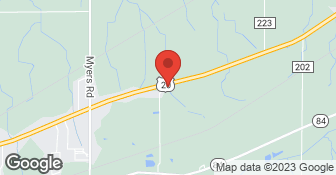 BEAVERS BUILT CONSTRUCTION is a general contractor specializing in residential and commercial construction. We serve the NEO area and beyond, on projects ranging from new construction to both small and large remodeling and renovation jobs. BEAVERS BUILT CONSTRUCTION takes pride in meeting and exceeding the needs of our clients, making sure the project is completed on time, on or below budget and they are truly satisfied with the results. ﻿...

Bradley Beavers of Beavers Built Construction did not complete the work and refuses to honor the signed contract. He will not answer my phone calls or text messages unless he thinks it is a potential new client. He talked a good game but believe me he does not have the resources or the knowledge to deliver the services he promises. In the beginning, the work performed was very shoddy and he admitted to me it was because he had to randomly hire people to attempt to complete the work. He agreed that the little work that was done, needed to be all ripped out and redone. After that conversation, weeks went by with no contact whatsoever. He finally sent a new worker to rip everything out. The trashed materials laid in my yard for another few weeks with no work being done during this time. The new worker finally came back and took the old materials away with his dump truck and promised to return and complete the work once Bradley bought the new materials. He showed up a week or so later and worked for a day with any materials he could scrounged up. He said he was instructed by Bradley to make the old materials, he hauled away in his dump truck, work any way possible and to use wood putty to fill in the old screw holes and any cracks. He did what he could but eventually spoke to me over the phone and said he couldn't complete the job because Bradley had no money to buy materials or to even pay him to do the work. So my house is like a danger zone and now I will have to spend more money to have the work completed before anyone gets hurt. He still will not answer my phone calls or texts and I have given him countless opportunities to make it right and honor the contract. Do yourself a favor and ask him for references, go look at his past work and talk to his past clients. I think he would be hard pressed and reluctant to provide you with any references. It has been over two months since this NIGHTMARE began and it still continues. I would never recommend Beavers Built Construction to anyone.

I gave a $6000 three months ago to get started. There was always an excuse for 3 months. Finally, he gets started a few weeks ago and I signed a contract. I went over the proposal and gave him 10 days to complete to allow for weather. This was 3 weeks ago. Half of the guys he wants to send doesn't want to come because he doesn't pay them. They came a few days ago. The crew he sent didn't have any idea what to do and make things worse. They ordered 3 trucks of concrete to start at 2 pm. The truck gets here at 2 and his crew isn't here. They get here at 2:20 and the concrete is only suppose to sit for an hour before it hardens. They were 2 hrs on the 1st truck. By the time the time the 1st truck is done, the 2nd started to set up to start laying and then the 3rd truck pulls up. That's where things got crazy. Their crew didn't know what they were doing. I thought it was a joke or something. They didn't get done with the 2nd truck and the 3rd truck started to harden. He said, "I have to drop this concrete, it's been over an hour." He said I would suggest you eat the cost, and let me take it back so I don't get charged a tank clean up fee. This company is called Cashens Concrete. He left with a whole truck of concrete. Right after, the other guy came with a bill for $3745 for the concrete. They left, I paid. Right after I paid, the guy said he was burnt out; couldn't take it anymore and left! They left my driveway a mess! They said they would be out tomorrow morning. He texts me at noon, apologizing say he can't come out and will come tomorrow. Today, no call, no show, nothing. I tried calling today and nobody answers. I have 3 phone numbers and no one answers any of them. The guy that Brad hired said he has 3 other jobs that he has to go back and fix because the work is not right. I would not recommend them at all.

Description of Work
I hired to them to put in a concrete driveway. And signed a contract.

They were referred to me by several friends and family members. The all said that they were prompt in getting the work done and any concerns they had. The first day they showed up at time promised. The second day they showed up 15 minutes late due to traffic. Both days they worked until 5pm when it started getting dark. The 3-5 days when the owner was not on site, they took their sweet old time doing the digging. The backhoe operator broke my front steps and back steps where they had to replace them they also bent up my downspout to my gutters which they replaced by after an argument with the owner about the steps being made out of sandstone. The owner told me that they should have been made out of concrete and not sandstone. He kept me trying to get me to allow them to rebuild the steps out of concrete instead of the Sandstone that was there before they broke them. In regards to the downspout, he said he would fix it and that was no problem. The job was supposed to be done in 1 week, it took them 2 1/2 weeks to complete it.

Description of Work
I had them do basement waterproofing on the outside. They were referred to me by several friends and family members. The all said that they were prompt in getting the work done and any concerns they had.

2019 and 2018 Super Service Award winner! CJ's Painting & Staining Services specializes in Painting, Staining, Power Washing, and Gutter Cleaning. Over 20 years experience providing great quality residential and commercial work with a focus on pleasing the customer to their specs. We are committed to delivering expert painting, staining, gutter cleaning, and pressure washing services. Contact us today to learn more about what sets us apart from the competition.  …

Beavers Built Construction is currently rated 1.7 overall out of 5.

No, Beavers Built Construction does not offer eco-friendly accreditations.

No, Beavers Built Construction does not offer warranties.

Are there any services Beavers Built Construction does not offer?