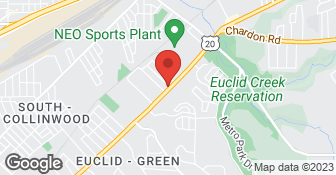 Description of Work
They come out and spray for ants.

Description of Work
Identified and removed a dead raccoon underneath the porch. Sanitized and deodorized the area.

They were late for their appointment, but were nice while they were at our home. Their dog checked our home for bedbugs because I thought I saw one after we had already had our house treated (with another company). The dog responded to our bed and my daughters bed. Neither of which had any evidence of bed bugs. The employee stated that they agreed that nothing was present but suggested we spend $3500 to have the house heated. In a moment of panic and desperation I agreed and gave them my credit card number for part of the payment and then 5 post dated checks for the remainder. After a night of not sleeping due to anxiety related to spending that much money with no concrete evidence of bedbugs I called and cancelled. They were very pushy on the phone and said they would mail back my checks. My husband also talked to them a few days later and asked for our checks to be returned. It has now been over a month and I found out my credit card was billed and I still have not received my checks back. I hoping that this will be resolved and I will receive my checks and a credit to my credit card soon. And as a side note no more bed bugs have been seen.

Description of Work
We had the company come out with their dog to check for bed bugs.

I called them out for bed bugs, they came out and took care of the problem if there was a problem. They didn't see any signs but I got paranoid. They were oblonged bugs. They were very polite and all good stuff. I thought they handled themselves very well and explained everything to me.

Description of Work
Precise Exterminating Service did my pest control.

Overall, poor performance. Three households chipped in for removal of an adult raccoon. We have many small children in the neighborhood and the adult raccoon had nested in a large tree in one our yards. Two people thought it may have been a mother raccoon with one or two babies in the tree. Basically, we were scared for our children because the animal was walking around in our yards during the day.Precise came within two hours of being called. The quote was $180.00 for two traps (including no additional charge to come and get the animals). What we did not understand, and what the Precise technician did not tell us, was that mother raccoons frequently roam around during the day for food, while staying in the tree with babies for most of day and night. Anyway, mother raccoon was trapped after five days. Precise technicians came later that day to remove the mother. According to our neighbor, initially it appeared as though one technician was prepared to go up into the tree to get the babies (so they wouldn't starve to death), but after walking away and talking to another technician, came back and said they would not remove babies from tree without an additional payment of $150.00 to $195.00. They were going to charge $45.00 just to take the ladder off their truck. The neighbor who had the tree in their yard said she couldn't afford that. They tried to convince her that it would be best to pay more to get the babies because their decaying carcasses would "bring lots of maggots," but she declined because she could not afford it. We tried in vain to find a rescue or wildlife rehabilitation agency, but none exist in Cuyahoga county (for raccoons). Earlier today, one of the babies was on that neighbor's roof and my husband retrieved it and put it in the remaining cage. It is now four days since mother raccoon was trapped, two days after Precise was supposed to come back and get the remaining cage and eight hours since we first called to tell them another raccoon was trapped and to please come and get their cage and the raccoon. No call back after three left messages. The three couples that went in on this job are very disappointed with this company's prices, quoting practice and responsiveness. Although two of us were former customers, we will never use this company again.

Description of Work
Precise Exterminating was called because a large adult raccoon was seen walking in the backyards of three adjacent homes. It had built a nest in a large tree in the middle backyard. Precise left two animal cages, one large and one small. We paid extra for the small cage ($35.00). They did not bait the traps because it was daytime and we didn't want to trap a squirrel or a cat. They came five days later to get the large cage, which had an adult (mother) raccoon in it. As of this writing, they have not come back to retrieve the smaller cage, which now has a baby raccoon in it; We think the baby raccoon is starving to death (we have put water in a bowl for it in the cage). They should have picked the smaller cage up two days ago, but have not responded to any of our voicemal messages.

This is not the first time I've had this positive experience with Precise - I've used them quarterly since before we moved into our home in 2004 (I hired them before the walls were closed up to spray even then). Every time, no matter who they send, the experience has been the same: perfect. I receive a call every few months to set up my next appointment, I've not had any significant problems with pests of any sort, and they've been a pleasure to work with.

Description of Work
Charles arrived on time and performed preventive pest control in all rooms of the house (including the crawlspace and closets) and the exterior. He answered all my questions about what he was doing and what he was spraying, and had a wonderful, pleasant demeanor the whole time. We even shared jokes and talked about our kids.

I have used Precise for two years now. My main problem is carpenter ants and they are able to control them without spraying poison. I have 11 parrots so I cannot have poison sprayed in my house. They are very professional and are willing to take care of any specific requests I have when they come out to do a service call. In addition if problem is not resolved within 7 days of treatment they come out at no charge and will treat accordingly until the problem is resolved. Recently I requested that they climb into my attic and inspect for hornets and wasps. They found several old nests and brought them down at no additional charge. One time we had a mouse get in the house and Eric {my tech and one of the owners of the company) actually tracked the mouse down and caught him! I live in a heavily wooded area so routine pest control is necessary. I highly recommend this company, good work at a fair price.

Description of Work
Perform insect/pest control with or without poison spray. Provide both indoor and outdoor protection.

WE ARE PLEASED WITH THE SERVICES PRECISE HAS PROVIDED US. THEY WORK VERY DILIGENTLY TO ENSURE OUR HOUSE IS PEST-FREE. WE HAVE USED THEM FOR ALMOST TWO YEARS AND THEY HAVE ALWAYS BEEN PROFESSIONAL, COURTEOUS AND KIND.

Description of Work
WE HAVE OUR HOUSE EXTERMINATED EVERY OTHER MONTH. WE HAD PROBLEMS WITH ANTS AND THEY TOOK CARE OF IT.

THEY DID NOT GET RID OF THE PROBLEM, AND TRIED TO SCAM US INTO SIGNING A LENGTHY CONTRACT.

Description of Work
WE HAD A MOUSE PROBLEM.

THEY ARE QUITE GOOD EXPLAINING AT WHAT THEY ARE DOING AND WHAT PRODUCTS THEY ARE USING. HAVE REGULAR FOLLOW UP PROGRAM WILL FOLLOW UP EVERY SEVEN DAYS IF NEEDED.

Description of Work
SEALING HOLES AND PLACING POISON AGAINST MICE

THEY WERE VERY NICE AND HELPFUL.

Description of Work
PUT OUT POISONOUS FOOD TO KILL OFF RAT (SHE WASN'T SURE WHAT WAS MAKING THE NOISE). WALKED HER AROUND THE HOUSE TO SHOW HER WHERE LITTLE ANIMALS COULD BE COMING IN.

As everyone knows, pests that live outside of your home don't belong in your home. Heights Pest Control is prepared to tackle those invasive pests in an effective, family friendly manner because we know that a safe home is important to you. Our “Green Band Protection System” is designed to get rid of any pests inside your home and then make is so they can never get in again by securing the outside perimeter of your property. Each of our highly skilled technicians are trained in the latest application methods, proper equipment use and maintenance, and will answer any questions you may have about the materials being used to treat the areas around and inside your home & business. As your local Green Pest Solution provider, we stand behind our Money Back Guarantee, because we will respect your home as if it was our own, and your peace of mind is important to us. But don’t take our word for it! Read our Angie’s list reviews. We have been an Angie’s List Super Service award winner THREE years running due to our exemplary ratings !  …

All statements concerning insurance, licenses, and bonds are informational only, and are self-reported. Since insurance, licenses and bonds can expire and can be cancelled, homeowners should always check such information for themselves.To find more licensing information for your state, visit our Find Licensing Requirements page.
General Information
Free Estimates
Yes
Eco-Friendly Accreditations
No
Senior Discount
ASK FOR DETAILS
Warranties
Ask for details

Precise Exterminating Service‎ is currently rated 3.9 overall out of 5.

No, Precise Exterminating Service‎ does not offer eco-friendly accreditations.

No, Precise Exterminating Service‎ does not offer a senior discount.

No, Precise Exterminating Service‎ does not offer warranties.

Are there any services Precise Exterminating Service‎ does not offer?