Insulation
Gutters
Sunrooms and Patio Enclosures
Doors
Finished Carpentry and Woodworking
Skylights
Windows
Masonry
Decks and Porches
Unfinished Carpentry
Licensing
Bonded
Insured
All statements concerning insurance, licenses, and bonds are informational only, and are self-reported. Since insurance, licenses and bonds can expire and can be cancelled, homeowners should always check such information for themselves. To find more licensing information for your state, visit our Find Licensing Requirements page.
Business Details 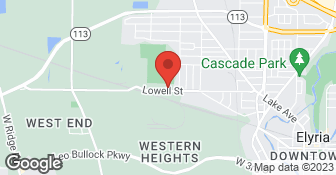 George's Roofing, Inc. has been serving North Central Ohio's communities since 1938. We employ local people on our projects and strive to use products made locally. Our only goal is to provide the finest quality in professional service from estimate to clean-up....

For over 20 years we have been specializing in roofing, metal roofing, siding, gutters, decks and more!! We are locally owned and operated, fully insured licensed and bonded. We can do whole replacement or repairs no job is too big or small.

PREMIUM INFINITY FROM MARVIN FIBERGLASS WINDOWS AND DOORS. OUR PRODUCTS: Our complete line of home windows & doors are custom-made for your home using our proprietary Ultrex fiberglass that is 8 times stronger than vinyl. The durability of Ultrex, combined with our timeless designs & finishes, will ensure your windows & doors withstand the test of time. OUR AWARD-WINNING SERVICE: Our goals with every customer are to provide a worry-free process & an exceptional experience. We also back our service up with a Lifetime Service and Installation Warranty. We'll take care of all the details, you sit back & enjoy your new view. ABOUT US: Backed by a company with over 100 years’ experience, Infinity from Marvin - Cleveland provides premium Infinity from Marvin fiberglass replacement windows & patio doors for your home.

While I ultimately did not use George's Roofing for my roof replacement, my experience was EXCEPTIONAL. The gentleman who came by was prepared, professional, extremely knowledgeable, very personable, was able to explain and explore options w me, as well as educate me. My choice not to use George's Roofing was completely independent of my experience. I would highly recommend to others. I felt Georg...

They were not really good. The guy came to the house and gave us a quote on the roof. Then he never came back. I called a number of times and did not get a call back. I went to his business, he was on vacation and was supposed to call me back when he came back. I had to wind up going with another service.

DESCRIPTION OF WORK
I got a free estimate from George's Roofing for a new garage roof.

[Member Name] was not happy with his insurance claim proceeds in comparison to our garage roof replacement estimate, and we were unable to persuade his insurance company to adjust their number to meet ours. We understand his frustration, and regret not being able to help.
4.0

They were pretty good. They were very quick to come back. I called them and they came out three days later to do the estimate. I also had them bring in some wood for some projects I was doing around the house and they brought it without any extra charge. They came back a week later and did the saddle. The singles that they put up were pretty good as well. The workers were nice and did the work on ...

DESCRIPTION OF WORK
We are using George's Roofing Inc. for roofing work. The first part was done couple of weeks ago and we're still waiting on the other part because the whole process is being kind of messed up because it wasn't a regular job. They had to saddle the flat part on the roof and replaced a vent on the roof. They were able to do the saddle right away, but the vent on the roof is from 1979, so they didn't have a matching vent. Therefore, they were trying to find one and since they couldn't find one, I'm just going to have them put in a newer one when I get the roof redone.

There was a shingle on the roof that was sticking up and we were concerned that it could present a problem. Once before we had this problem and the roof began to leak. Contacted George's Roofing which we had experience with and told them of our issue. They indicated that they could come out on the 11th of July at 9am to check it out. At 9am on the 11th they showed up and within ten minutes they we...

DESCRIPTION OF WORK
Checked on possible issue with roof.

First, they gave us a quote (actually came out to the house) of $100.00 less than the other roofing company we contacted. The quote they gave us was only for replacing the fascia, but they said they would remove old, damaged heating coils for the same price.  My husband and I were out of town when they came to repair the roof, and they were great interacting with our 18 year old son who was at hom...

DESCRIPTION OF WORK
Re-hung fascia brought down by a storm, removed old heating coils from roof.