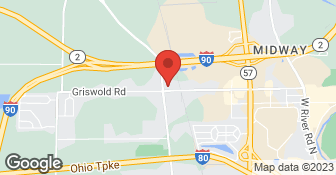 We are a locally family-owned business....

Mr. Handyman solves all your home repair and home project needs. We have been in business for over 12 years. Our technicians are highly skilled, with over 10 years experience. They are capable performing any project around the home and our work is guaranteed. We have the staff to respond to any request for work within three business days or sooner. We also do bathroom and kitchen remodeling.  …

Since 1978 J & B Appliance has been providing in-home service on major appliances to the greater Western Reserve area. We currently have Have 8 Full-time employees, That includes 6 technicians and two Office staff. All service is COD. And we always flat rate quote the job before anything is done. We accept all major credit cards, checks, and cash  …

Unfortunately due to an unforeseen accident I cannot accept new clients at this time.  …

Great! Prompt courteous service. It was a faulty connector. He replaced it and all is well!

Always responsive and willing to accommodate my schedule and needs. Work completed as soon as required part arrived. Answers and returns calls promptly. Very professional and neat. Gives excellent advice and explanations of the work being done. I trust Chuck's work completely.

Description of Work
Fixed a leaking valve in dishwasher and fixed a malfunctioning ice maker in refrigerator.

Fixed on 3rd attempt, but not the fault of AAA. They received bad advise from manufactuer's tech support. Upon AAA's recommendation, we were able to get free parts and service for the 3rd service call.

We are so glad that everything worked out for the customer. The factories are usually pretty good about working with the consumers.
5.0

They are very prompt, polite, and professional.

Description of Work
They repaired our refrigerator.

Did not use them. Cycle corrected itself.

Description of Work
Washing was not cycling correctly

Chuck identified the problem quickly. He ordered the part and returned 2 days later and fixed the problem with a new propeller. It is back to functioning as it should. Chuck is always professional, explained the problem and what needs to be done to fix it. AAA Appliance has worked with all our major appliances and his service is valued and trusted. The price for each visit is reasonable. This company is our primary appliance repair choice when we are in need of this kind of service. I highly recommend calling them when your appliance need repair.

Initial visit for inspection was scheduled quickly and they worked patiently with my warranty program to order parts and was replaced and fixed within 5 days. extremely professional and quick response. will use it in future.

Description of Work
Fix the dryer

We've had an electric GE dryer for just over 7 years. I noticed this past weekend that it didn't seem to be drying like it should. We often use the low heat setting and that wasn't working. My wife had to switch the temperature setting to high heat. Monday rolls around and the dryer still didn't seem right. I ended up calling AAA Appliance Service and explained the situation. The lady I spoke was extremely polite and helpful. She mentioned that the problem could be with lint and to check that first. I checked the the dryer exhaust and it was fine. Per her suggestion, I also checked the flow of air from the dryer vent on the back of the house. That didn't seem restricted. I ended up finding a YouTube video showing how to take off the dryer's top and front panels. It turns out that there was quite a bit of lint that had accumulated. I saw no way of getting to it without first removing the panels. We've used the dryer twice on the low heat setting and it seems to be back to normal. I can't thank AAA Appliance enough for their help. The company could've easily dispatched a technician, but they saved me the cost of a service call at the very least. That honesty deserves to be mentioned! I would not hesitate to use this company again in the future.

Description of Work
Dryer was not drying as it should.

I called the company for stove repair as we noticed odor of gas on several occasions over a 6 month period. It was the Friday before July 4 and she said a repairman would be out on Monday and he would call in the morning to give me an appointment time. When the repairman called on Monday, he asked a lot of questions about the stove and what the problem was and how old the stove was. Since the stove was included when we purchased the house two years ago, I was not sure, but it was probably new when the house was built in 2001. He was very knowledgeable and said it was not the top burner that I had suspected and more likely it was the regulator which was located under the broiler. He said he would have to order the part and would have to check the price and call me back in 5 minutes. He called back and the price for the part and the labor would run over $200. He suggested to make sure that was the cause, the next time we smelled a gas odor to open the oven door and if the smell was stronger inside the oven then the regulator needed to be replaced. I asked him if it was dangerous to wait and he said no. I said it probably would be wiser to just buy another stove rather than spend the money to repair it. He did not disagree and told me to call back if I decided to have the repair and they would order and install it. He could have easily come out on a repair call, diagnosed the problem and charged for a service call and then came out again to install and charge for another service call. I appreciate this kind of reputable service and it created a lot of good will in my eyes and they will be to "go to" people for appliance repair from now on. We decided to just replace the stove.

Description of Work
Diagnosed problem over the phone.

Service was provided by Chuck. He was awesome, reasonably priced, excellent service. Came when promised and did excellent work. I would certainly recommend!!

Description of Work
Replaced a unit in my oven

Appliance repair and over the counter parts sales

We do not sell appliances.