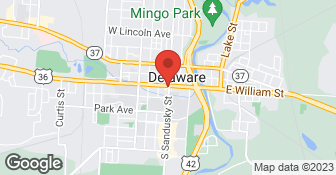 All things plumbing and remodeling...

Midwest Water Softeners is a water conditioning and purifying company in Central Ohio. We believe that EVERYONE should have PERFECT WATER FOR LIFE because pure and great tasting water is one of the very best quality of life benefits anyone can enjoy. With more than 22 years in the water conditioning and purification industry, Midwest Water offers sales, service, and installation in a vast number of water treatment applications in and around the Central Ohio area. RIGHT NOW we are offering our premium Vesta Water Softener with a LIFETIME WARRANTY and 10% off to all Angie's List Customers. Please see the DEALS tab for more information!  …

Thank you for choosing Discount Drains. We are a family owned company serving all of Columbus and surrounding areas for all of your plumbing and drain cleaning needs. We pride ourselves on quality installations, customer service and great communication at unbeatable prices. Call now for a FREE, no obligation in home estimate! 614-747-5561  …

Description of Work
This plumber was subcontracted by the contractor who was remodeling our basement. I also hired him to upgrade our sump pump with a back-up system and to install pans below our water heaters in case they leak. This job was perfomed adequately, but in the process they messed up the second water heater. One point they forgot to turn our water heater back on so we had cold water on a weekend...NOT FUN!!! This install cost slightly more than he verbally told me. I paid him very quickly. Well, not too long after this our second water heater (electric) failed. It could have been happening, but who knows. He claims they had nothing to do with it. I ended up having to have them replace that water heater and again the cost told to me verbally was lower than the bill he sent me. I still paid in full in a very timely matter. Well...the contractor on our basement remodel decided to try and kill himself and then dissapear. We were out lots of money and supplies. This sucked and we were trying to deal with this. Not even a week later this contractor called and told me that I owed him $4000.00 dollars for the work contracted by the guy doing our basement. He basically in sort of kind terms threatened me with a lein on our house and to pull the permit he had on the basement remodel. We did eventually come to a deal, but I had to pay more than half of this bill again. To make it worse, two of the pipes they had moved/changed leaked. Then on the install of the sink in the bathroom they left a hole in the wall that no one knew about until we failed the inspection for it. My back-up system for my sump pump keeps acting up and his only advice (with out having come to look at it) was to look at the battery and call the 1-800 number on it. He kindly thanks me for my understanding in this matter. He had no understanding for us or our loss in this process...only his. I will NEVER have this contractor work for me again unless it has something to do with fixing what they already have done. The sad part in all of this...I did not have a choice in this contractor in the first place. We did finally get our basement finished with very LITTLE help from him (actually he never came back out...only sent his employee who took twice as long to do what he needed to do).

Angie's list is an unfair forum and I could care less about what their customers pay to write on this website. There is nothing on this website that forces people to tell the truth, It my experience it's just a place for people who don't want to pay their bills or have made bad decisions, to cause harm unjustly to any company they feel wronged by for about $4.00. Angie’s list does this because in order to improve my rating I have to solicit my “good customers” to write “good reviews”. I have been in business since 1997 and have enough “good customers” that I don’t advertise or use Angie’s list. I have never had a complaint on any forum until 2011 when one guy decided not to pay his bill for a gas job and Mr. O’reilly decided to entrust Webb Contracting aka Basement living systems with $20,000 that they stole. In both of these situations A&J was the victim. Because you pay to be a member Angie's List your opinions are your property and cannot be removed without a court order even though they are untrue. You entrusted Mr. Webb with your money and assumed he was paying your bills. When you found out that was untrue he had already checked himself into a mental hospital. As the homeowner you are responsible for paying for improvements to your home. The fact that you paid Mr. Webb and he did not pay me is not my fault. I did not hire him as my representative you did. A mechanics lien is a guarantee of payment for contractor’s services. It's a contractor’s only recourse for collecting money owed to them. If you felt you were wronged why did you negotiated a settlement with me. I even gave you a $1500.00 discount because I felt bad that YOU had trusted Mr. Webb and he did not follow through. As far as your hot water tank, the problem was in the electric panel that Mr. Webb had been working on and had forgotten to turn a breaker back on (you know that). The leak appeared weeks after A&J had been at the home and the job was in the process of drywall. Unfortunately when you hit a transition fitting with a hammer during drywall installation it has the potential to leak (and you were not charged and no damage was done). The instructions (which I kept asking you to read) on your backup sump system say “Do not return to store contact us directly with problems”. There was no issue with the installation therefore no reason for me to return, your issue is with the company that made the pump (you know that too). Every aspect of your plumbing job was overseen by the city of Powell’s representative, and all deemed to be installed correctly and to current standards. I sorry YOU let Mr. Webb get over on you and can only hope you use that as learning experience. But by your posting here it looks like you’re still trying to blame someone else. I wish you nothing but the best and hope eventually you’ll realize you only have yourself to blame. God Bless
1.0

This company is in violated they failed to pull city of Columbus premits before starting work, and did not pull premits until after the City of Columbus called him in for a complaint hearing, putting us in a dangerous condition by not having a required inspection until months later, if it was not for the violation hearing we would have not had a inspection. The contact person at the City Of Columbus is Tony 614.645.5884 to gain further information on the city investigation on this vendor A&J Plumbing and mechanical. This issue was heard in court, at which A&J admitted they failed to pull premits as required by City of Columbus , The city of Columbus Rep also admitted in court that A&J failed to follow the law, regarding the pulling premits, in my opinion this was another contractor charging consumers for work illegally done. I WILL NEVER USE THIS COMPANY AGAIN

Description of Work
A&J Plumbing came to my property 3 times attempting to repair a small leak in a short area of piping, blaming Columbia Gas for in my opinion, their lack of skill to make the small repair, Columbia Gas advised them where the leak was and they still did not get it repaired after the first time,(of course we already paid them after we were assured it was repaired) A&J again advised us it was repaired and we called Columbia Gas and again the leak was present) they asked us to use a bike pump to help find the leak, the 3rd time after finally taking the advise of prosfessionals after finding the leak they promised they would make things right and take care of us. and promised us they would pay the columbia gas trip charges then a week later they attempted to charge us again after all week of being in the cold mis-leading us about the repairs, and blaming Columbia Gas for there deception I would not ever use these people again. This company broke the law, and did not correct the issues the same day it was a week later on the repair and over month on the premit AFTER we reported them to the city of columbus, this information is available via CIty Of Columbus Department of Development this company has been set for a hearing in Feb 2012 regarding the illegal acts committed "not pulling the premits "

Work was done on 9/28/11 All statements made by the customer were made after a Mechanics Lien was filed on his property for non payment on 10/24/11 Document no#201110240135839 which is public record and can be seen by all on Franklin County Recorders website. Unfortunately there are going to be few customers that have the something for nothing mind set. A&J acknowledged a mistake was made in this situation and remedied the problem same day. The customer was completely unreasonable and his only motivation for this false post is revenge for pursuing him through proper channels to get payment. This can be proven by the fact he did not complain until he realized we were pursuing him for payment