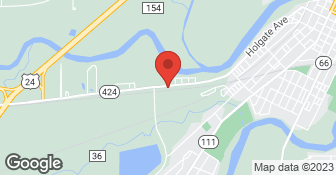 Family owned and operated since 1956. We offer services from installation of furnaces, air conditioners, boilers, heat pumps, geothermal, humidifiers, air purifiers, duct work, water filtration systems, water heaters - tank and tankless, bath remodels, sewer cleaning and replacements, waterline replacements, replacement of plumbing fixtures and we also service everything we sell!! We do offer financing for installation of HVAC products. We employ 6 people and have 4 service trucks to take care of all of our great customers....

Luckily the owner was able to estimate the cost of the job without photographs and by telephone for $600.00. After purchasing the faucet myself, two workers arrived at 9:45 am and assessed the situation. Both left at 10:45 to get parts and returned at 1:15 pm to begin the work. Upon completing the work at 4 pm, we were shown how the faucet worked. I was told the job took longer because of difficulties with the drain pipes. After several weeks I received a phone call from Tina asking about the bill. Not having received a bill, I asked for the total amount due and was told $900.00. During a later phone conversation with the owner, he verbalized the job taking longer than estimated and it being difficult to determine possible issues without actually seeing the project.

They came to the rental property. They changed the things that needed to be changed out and they fixed what had to be fixed. Then the furnace wouldn't run after that. They found the problem and told my renters they hoped they had good insurance because the house was going to burn down. There was soot build up. They called my husband and said there was a leak and it was going to have to be replaced. He didn't mention anything being unsafe or house burning down. We didn't know what they had said to the renters. My husband called the owner and he didn't apologize and that was the end of the conversation. The furnace is being replaced but, not by them. We have six rental properties and it happens all of the time and I would not use them again.

Description of Work
Morris Heating Air Conditioner & Plumbing tried to fix the furnace and put oil in it.

They charged us for the new water heater instead and said that is what we wanted! Who doesn't use a warranty if product goes bad? I paid for labor and parts and explained in a note that they had not enacted the warranty. Since they still charged us full price for the water heater, which was under 100% warranty. When my husband called to ask what was going on "Tina" said don't ever call us for service again". This is a company that does not want to stand behind their company warranties. They wanted us to pay the full $450 for new water heater (mind you it's still under 100% warranty) plus labor and parts. No problem with parts and labor. Very poor office person, rude and crude.

Description of Work
We had purchased a water heater 5 years ago and it died over 1 year before end of warranty. The young man that put new one is was fine. However we wanted to use the warranty left on the water heater. This began the problem.

Since our company has been in business since 1956 and have covered many warranties for our customers on their equipment I felt the need to respond to the false statements submitted by customer. On 3/26/14 she called us inquiring the warranty on her hot waterheater that was leaking .She also stated that she had very bad sulfur water and was used to replacing appliances for that reason. Due to the fact that we put the unit in I had the information needed to check the warranty for her. I called my supplier and they informed me that there was less than 1 year left on warranty. I called customer back and told her what remained on her warranty and gave her the choice of replacing it under warranty and only having months remaining of warranty on the new waterheater because that's how it works, or to pay for new waterheater and get a new 6 year warranty on the unit. With her water situation that is why I gave her that choice. She said she would think on that and I told her that was fine and just let us know. 2 months later she finally called to replace her waterheater. I was on vacation at that time and she made no mention to our servicemen anything about a warranty so they disposed of the old waterheater as we always do. In order to get warranty on waterheaters we need the plate off of the unit which was gone. So customer was invoiced for the full replacement of the unit. We never received any phone call or anything from customer. After almost one month of not receiving any payment I sent out a statement requesting payment. At that time customer made a partial payment and inquired about getting billed for waterheater. Then her husband called and I tried to explain to him why it was billed as such. He started harassing me and also said that our product we sell won't even last through a 6 year warranty. At that point, yes I did tell him to do what he wanted and not to call us again! Seems fair to me!
5.0

They were very professional. They showed up a little early. We were new to the house and he showed me how to use the thermostat. He cleaned everything and showed me how to clean the outside of my air conditioner. He went above and beyond what he was supposed to have done.

Description of Work
We have used Morris Heating, Air Conditioning & Plumbing for our heating and air conditioning.

No, MORRIS HEATING AIR COND & PLUMBING does not offer a senior discount.

No, MORRIS HEATING AIR COND & PLUMBING does not offer warranties.