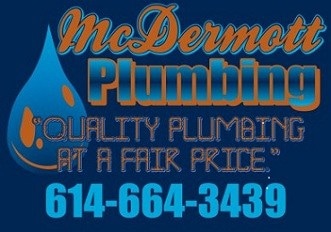 Mission Statement “Quality Plumbing & Backflow at a Fair Price” is both our motto and mission statement. Here at McDermott Plumbing & Backflow we strive to achieve this goal each and every day by providing both our repeat and new customers superior plumbing and backflow services at a price they can afford. Our mission statement was developed by our company founder and owner Michael McDermott when he founded the company in early 2009. Michael is the 5th generation master plumber as well as an OSU Alumni. From the time of our company’s inception Michael’s goal was to create a plumbing company like no other company before with the main focus being on the customer. To achieve this goal he structured the company in a method that does not focus on the volume of work completed but our customer’s satisfaction of the work completed. This strategic plan has allowed our company to grow significantly by earning our customers trust and therefore their business in the future. To earn each and every customers trust we promise only flat rate and honest pricing. This means, we will provide each customer with a guaranteed low price before the work is begun. Our customers agree with the philosophy that knowing the total cost of work before the job is started is a key factor in establishing trust. Along with earning our customers trust we also focus heavily on our team members. Our staff is exceedingly trained in all elements of plumbing, backflow testing & backflow prevention. Our team members are also background checked and drug tested before hiring. Furthermore, all team members are trained in house to determine each individual’s competency before being allowed to work independently. This allows our customers to be certain that every plumbing and backflow service be performed with quality you can expect and at a price you can afford by a highly trained plumbing and backflow professional

Sometimes you live and learn and sometimes you live and get burned and that was our experience with McDermott Plumbing. The leak began before Xmas and Mr. McDermott himself showed up to do the job. We were charged $99 for the service call. He thought the issue was that the toilet needed to be reseated. That was another $249, so we're out $300 for this. Two days later the dripping starts again and I call McDermott Plumbing again. Because of sickness, they can't get out until 01/19/22. Fine--but I get a nagging feeling that I need to make sure I'm not paying another $99 for a problem that wasn't fixed the first time. I call back and get an answering service and I leave a message. No call back on the 18th, so I call and get McDermott himself. He says he's not going to charge me for a service call. What he IS going to charge me is $129 for "an inspection fee" but he'll take that off of any repair work that costs over $400. Deciding "fool me once/fool me twice" wasn't a game I wanted to play, I canceled the appointment and called a handyman instead. When he came out to check the leak, he also checked the seating of the toilet and found all McPherson had done was add more sealant ON TOP of the existing sealant! It was a goopy, nasty-looking MESS (here's where I wish Angi allowed pictures to be included in these reviews). The handyman went to the hardware store for a new, extra-thick wax ring, something he said the other guy should have done in the first place. This was a nightmarish experience from the beginning. I try to trust professionals will do professional work, but that's not what happened with McPherson Plumbing. I regret having called them and under no circumstances would I ever use their "services" again. If there were a way to give a half-star or none at all for this rotten experience, I would do it.

Description of Work
Water leak dripping in the kitchen from the bathroom above it.

Very well. Mike McDermott analyzed the unusual drain design and was able to clear it quickly. Two other plumbers had been unsuccessful over a period of more than a year.

The experience went well. I called them. An appt was made for a week later between 2 and 6PM. The plumber showed up and fixed the problem. No drama.

Easy and successful once scheduled. Called and left new customer message via answering service on a Friday. No call back on Friday. Called again on Sat. AM and got owner/Mike; they had been very busy. Scheduled for Monday; 4 hr window; emailed me confirmation. Mike called about halfway through window for 30 minutes head up. Arrived around 45 min. later. Took about 1 hr. Mike plus a couple helpers to retrieve tools/clean up. They were professional -- masked, looked neat and answered my questions well. Tricky slab plumbing system to snake; Mike made sure he wasn't snaking into kitchen pipe. Smart cleaning system; nice smelling cleaner. Seemed cleaner after they left than before. They missed only a couple very minor spots. Emailed me paid invoice. Service call fee + job fee reasonable given COVID. Nice Angies list discount on job fee. I'd use them again.

McDermott Plumbing never contacted me to arrange to give me an estimate. Vic the plumber made an appointment for an estimate but never showed up! Discount Drains did the work for a reasonable price and did good work.

Great. Was very efficient and professional. Showed up right on time. Very fair price for the services performed. I highly recommend them.

We dealt with the owner, Michael McDermott. He normally answers the phone when you call (from his cell phone on a job or wherever). I thought he was a very small operation, but he has three or four trucks and 5 or 6 licensed plumbers. Mike happens to work the neighborhood where we live, so we dealt with him on the job. We had a faulty master bathroom faucet (bad cartridge) that was 17 years old and the under counter shutoff valves wouldn't completely close. The faucet brand is out of business and its cartridge was proprietary and a replacement could not be found (we both tried). So, we had to replace the valves and both faucets (couldn't have two different ones, of course). Mike could supply them from his wholesalers, but we bought them through Amazon since Mike told me they would probably be less expensive that way. I appreciated his honesty. The installation was efficient and everything now works fine. He also showed me how to repair/replace/remove the flow restriction parts should I ever care to do so. The labor charges were reasonable and the work excellent. I highly recommend McDermott Plumbing.

The problems were diagnosed & repaired quickly. Fellows were polite & friendly.

Excellant work, professional quality Recommend highly and claim now that he is my plumber!!

I called on a Tuesday morning and Michael, the plumber, came out that afternoon to assess the problem. He arrived the next day in the early afternoon and fixed the problem. Prompt and great service. So far, everything is working perfectly.

Description of Work
Repair a leak in my bathroom drain.

Found Cylinder in Faucet was bad. Replaced the Cylinder

Fantastic. Professional. Mr. McDermott even replaced our tub spout on the same trip when we pointed out a leak in the ceiling. He knew right what to do. Amazing. The only thing we expected was the water heater replacement, which also went splendidly.

McDermott Plumbing consulted with me by phone, and based on my description of the issue and age of the water heater, recommended replacement. McDermott was very responsive in getting here and installing a new unit by the next day after I contacted them. The owner, Michael, and the plumber who came on site were both informative and customer-service oriented.

Showed up on time and completed work. It was done by spot in normal biz hours, not an emergency. There were no parts used for repair. The total bill was for Labor. From the time he showed up to the time I paid him was a total of 45 minutes- which comes to $600/hr.

Great service. Fair price. Stand behind their work even when things didn’t go as planned. Highly recommend and look forward to working with them again.

The original plumber referred me to another plumber who was a better fit for the issue. He fixed the issue.

Michael was excellent. He quickly diagnosed our water pressure issue ordered the necessary part and after scheduling a return visit, installed and verified the solution was working. While he was here he also replaced s toilet shutoff valve. He is a trustworthy person who offered advice and suggestions for some other non-urgent plumbing projects and never tried to pressure us into doing more work than we wanted. Michael will be my first and only call for any future plumbing work.

Seemed very knowledgeable (more so than the last time that shower handle had broken). Hopefully this will all hold up better!

This is one of those very few times where everything was as it should be. Michael McDermott excelled at every step of the process, from the estimate to the installation. His communication skills are excellent, he is congenial, and did the work I wanted in a professional manner. When he was finished with his work, he left my home intact- no debris to clean or furniture to move. I will definitely use him as my first choice for plumbing work.

I called 3 companies rated A on Angie's list. Only McDermott Plumbing answered the phone. (The other 2 never even responded to the messages I left). Michael scheduled an appointment, showed up on time. Fixed the problem. Professional and Helpful. A few weeks later I encountered another issue. He was able to refer me to another professional to resolve it. This is the kind of company you want to develop a relationship with. I am so glad I found them.