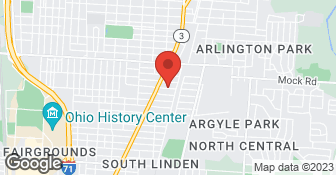 They did exactly what I asked for in a timely fashion and it looks great. They replaced two cabinets and we are very happy with the work.

His phone was "disconnected", & when I did reach him he said "can you hold on, the cops pulled me over". This guy is not the one you want to pre_pay!

Description of Work
We paid to have kitchen sink&garage disposal reconnected after new sink install. Now it's a holiday weekend &it's a NO CALL/NO SHOW.

Do not use this handyman. My husband contacted this handyman for his $99/2 hour labor special and had him come look at a small gas line job. He agreed to a $99/fee, although indicated he would prefer to not be paid through that Angie's list service, because of their cut. He quoted us on parts and mt husband gave him $60 cash to procure the parts and come back the next day at 5pm to complete the job. He then gave my husband stories about getting robbed, needing to help his broken down sister, and didn't show up that day until almost 8pm. When he showed up he had the wrong parts and limited tools. It was discovered the part we needed was a specialty part not available locally so we would order it ourselves. We asked for our cash back as zero parts or service was provided to us and he became elusive, indicating he "bills his time at $55/hour" and that he considered the money we gave him to account for his time. We consider this theft and even if he were to return my money we would have no interest in dealing with this individual in any fashion. I highly advise not using this person and Angie's List should rate him accordingly. Basically he is a thief

After numerous calls and set up times the service provider did come to the house. I had informed him what was needed to be done, a couple of small jobs that should only take a few minutes each. He stated he needed to go to the store and would be back in little while. I informed him that his time shopping should not be part of our two hours of labor. He said he had no parts and I said lets skip the deal. He was polite and said OK. He brought in a wrench and attempted to tighten a nut on a pipe and I said don't worry about it.

We had a clogged kitchen drain, so we bought this provider's "$99 for two hours of plumbing work" deal. It took him the full two hours to get to the problem but when he left, the problem was solved! He knew what he was doing and the price was right. On the negative side, he arrived an hour and a half late and I had to clean up the pools of water that were left underneath the sink.

I hired Robert on Tuesday April 22nd to replace the spigot at the side of my house, since it was leaking badly and I couldn't stop it unless I turned off all the water in the house. It was urgent, so I was glad that Robert could come over later that day. He came over at 6.05pm the same day. His face was covered in grime, and he looked very untidy. He explained that he had been working on a motorbike all day. I still let him in, since his father had worked for me some years ago. He said it would take a very short time to replace the spigot. I gave him money to go and buy the materials he needed, and he left my house at 6.15 pm for Lowe?s. I waited and waited and waited and finally called him around 7pm, only to find out that he didn?t have enough money for the parts, and was trying to get them at another place. After I called him two more times, he finally returned around 7.30pm, and started the job. He told me that he would not charge for all the time he?d gone, and I understood that he would charge for just half an hour. He also said that in view of the time he?d wasted, he?d only charge me for an hour?s work, that is, $55. Around 8.30pm he announced that he needed some more materials, and I gave him another $20 to get them. He returned around 9pm, by which time it was dark. I suggested that he leave the job until the next day, since he couldn?t see well enough, but he insisted on going on. Each time he thought the job was done, the pipe continued leaking. He finally added another connection and stopped the leak, but now the pipe was sticking out about 6 inches from the side of the house, and was not properly secured! I told him that was not acceptable. It was now 10.30 pm, so I just wanted him gone, and I offered to pay him off. Imagine my surprise when he told me that it would cost $165, even though the job was not complete. When I said I could not pay him that amount for a job he hadn?t done properly, he offered to accept $100 for what was done so far, and also said that, if he came back the next day, he?d have to charge me again, this time at a rate of $80 an hour. At this point, I just wanted to get rid of him, so I paid him $100 and he left. The next day, the pipe began leaking badly again from where he had joined the two pieces. Since it was clear that Robert had no idea what he was doing, I didn?t even bother to call him back. Instead, I hired Dustin Porter, my regular plumber, who had been unable to come on Tuesday, and he came and fixed the job on Thursday April 24. He took one look at the job Robert had done, and said he would have to redo the whole thing. It took him exactly 20 minutes to install the new faucet, as well as a cut-off valve! When I explained how much I'd paid already, he generously offered to do the job for only the cost of the service trip plus parts, for a total of $67. This was a relatively simple job, which Robert completely messed up.Frankly, I don?t think Robert has any expertise in plumbing, since the work he did for me was shoddy beyond description, and cost me over $150 in parts and labor (not counting the change from the last purchase, which he did not return to me, ). I hired him because his father, Robert Sias Senior, had done good work for me before. Unfortunately, his son is not the same man, and I advise Angie?s List members to avoid him at all cost, at least for plumbing jobs. Maybe he's better at other things.

Description of Work
He tried to replace a faucet/spigot on the outside wall of my house.

Called an hour after scheduled appointment saying he had overslept. Arrived to do the work then and got the job done. Seems like a nice enough guy but could use a little more professionalism and an alarm clock.

thank you for your business and review
1.0

Scheduled appointment. Provider no-showed the job, and both phone numbers I was able to find went to "number not in service" messages. Didn't receive a call until approximately three weeks later. Provider didn't offer satisfactory reason for situation, but I had already found a different (and much more professional) provider to do the work, so I didn't push the issue.

Description of Work
Scheduled appointment. Provider no-showed the job, and both phone numbers I was able to find went to "number not in service" messages. Didn't receive a call until approximately three weeks later.

i am sorry i wasnt able to make an the appomients my father was in the hospital with cancer and my fhone and truck were down i had no acess to your information to call and let you know if possable id be willing to give you 50% off or 2 hours free to correct the issue costmer sastifaction is very important to my company and I id be more then happy to make this right thank you and have a wonderful evening
1.0

Not well. Provider never called back. Phone is now disconnected.

Description of Work
I purchased a Big Deal from Home Owners Handyman Services.

CertaPro Painters of Columbus has been serving the Central Ohio and Greater Columbus area since 1994. Locally owned and operated, we are a professional house painting and commercial painting service. We have an outstanding record of customer service and industry leading expertise.  …

At Palmers painting we strive to give excellent customer service while creating a mutually beneficial relationship with our clients. Work is done safely and efficiently to meet the quality standards of you. The home owner. We provide everything from painting, staining decks and fences, drywall repair, basic plumbing and electric. We are a family company who works for you!  …

Home Owners Handyman Services is currently rated 3.9 overall out of 5.

No, Home Owners Handyman Services does not offer eco-friendly accreditations.

No, Home Owners Handyman Services does not offer a senior discount.

Are there any services Home Owners Handyman Services does not offer?