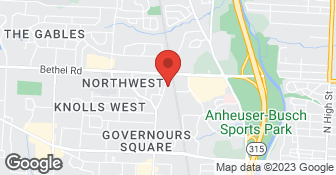 In business for over 50 years, Hetter Heating & Cooling is the industry leader for all of your HVAC needs! We pride ourselves on offering central Ohio consumers honest, reliable, knowledgeable & highly trained service & installation technicians at a fair price. We offer various promotions through out the year including factory rebates & financing packages. Awarded the 2010 and 2016 Better Business Bureau, Torch Award for business ethics....

Had previously called the large company that installed the system for the repair and told them I had no heat. They said they could get to it in 3 weeks! Hetter was here in 2 days. Had a pressure switch error code and furnace not blowing warm air. Hetter had the furnace fixed and blowing warm air in 15 minutes. Signed up for their annual maintenance plan due to their great service.

We've been using Hetter Heating and Cooling for more than 30 years and appreciate them for their honesty and knowledge. They don't try to sell you something you don't need, and their technicians know the best way to solve every problem. If a problem arises that a tech is uncertain about, he can call a fellow Hetter guy for advice. Really, the Hetter employees are like a family--helping each other find the best results for you. One of our favorite techs is Lance--a big guy whose experience and gentle nature make it easy to welcome him into our house. We welcome the opportunity to recommend Hetter Heating and Cooling to our friends, because we know Hetter will take good care of them, and they will be grateful to have found such a reliable HVAC company

Wow! That’s all I have to say. I got home yesterday to a cold house...my furnace (which I’ve been meaning to replace anyhow, but didn’t )finally gave out. Are you kidding me? On Christmas Eve eve. After business hours. 🤦♂️ I called their number anyhow and got the answering service. I figured I was out of luck until after Christmas. About 630 last night, the owner, Rick, called me. He was out here before 8 AM today to give me a quote. The guys, Scott, Michael, and Donzel showed up a little over an hour later and by 11:30 AM I had a new furnace and air conditioner on Christmas Eve day!  This company has done work for me and a friend in the past and ALWAYS with the same results. If you ever need furnace or air conditioning work, Hetter Heating & Cooling is the place to call! Thank you so much!!

We have trusted Hetter Heating and Cooling for more than 20 years, and they have never let us down. Service technician Lance called before arriving, arrived on time, and was fast and efficient in checking the furnace and making sure everything was running properly. One of the best features of dealing with Hetter is that they keep good employees like Lance. We've started feeling like Hetter is part of the family, and we know they take good care of us. We would never hesitate to recommend Hetter to friends and family.

Everything went well. The work was done on time and as promised. They followed up by providing the warranty registration and helped with the home inspection.

Hetter replaced the heat pump, air handler and thermostat. They did a great job. Arrived at 9:00 am and were finished by 4:00.

Walt and Zac did a great job on a hot day. Punctual, professional and considerate of my 96 year old dad. New unit is cooling great. Special thanks to Kevin for getting us a good price and a quick schedule.

It could not have gone better. Technician Lance not only fixed the problem; he also showed me what had caused it, and what to check myself, so I could save a future service call.

Description of Work
AC broke down on a 90 degree day

Our 20 year old A/C system froze. Technician arrived at 8:30 in the 8-12 window which was greatly appreciated. He explained to us that for as old as our system was and that it had never needed refrigerant, being only 1.5-2 lbs low was pretty good. He made no guarantees that this would work since there could be a leak, but we appreciated his honesty in not throwing money into looking for the source of a possible leak. Any repair wouldn't be worth it given the age of the system. Would definitely hire again!

Today, I met another nice member of the Hetter family--Ricky. Like all previous Hetter technicians, he was on-time, knew his stuff, was friendly, and did his job to perfection. Hetter does it again!

I would give them an A of everything and recommend them.

Description of Work
My old HVAC was shot they replaced it. I also ask for a humidifier. They also corrected code violation related to previous system. They were efficient, corteus and quick to inform and answer questions. Did a great clean up.

We've been using Hetter Heating and Cooling for nearly 30 years. Their technicians know their stuff, and can solve every problem. I think the secret to Hetter's success is their employees. They are well-trained and they help each other learn from their experiences. Two of our favorite service techs are Lance and Chuck. They've been with Hetter for many years, and Hetter is wise enough to find, and KEEP such good employees. I wish all businesses had employees like Hetter's, and were smart enough to hang onto good people.

BEWARE of Hetter Heating and cooling Technician, he is very busy making money instead of troubleshooting and fixing the issues of A/C. Technician had a quick solution by filling 1.5lb Freon in 15 minutes and charge $600.

Our unit broke on one of the hottest days of summer. Kevin Cull was able to schedule us right away to give us a quote on a new unit. He was very knowledgable of many different system options and educated us on the best fit for our size home and need. His quote was significantly less than another company for a larger size furnace unit and better brand name. Initial installation was 3 weeks away, but Kevin was thoughtful and saw their was a cancellation and got us an install within 3 days. The install team was professional, on time and educated us on how to care for our new units and program our new thermostats. Unfortunately, and item on our control panel went out, causing our dampers to fail, but they came out right away and diagnosed it. The technician was smart and came up with an alternative option to program the dampers without costing extra money.

Did not have two installers for half day job as quoted for installation, only one arrived. Immediately expressed concern as I had only taken half day vacation for install based on 4 to 4.5 hours needed by two installers. Installer said he would work as quickly as possible to get it done in same or near same time frame. I was forced to take full day of vacation as job completed after 2 pm. I do not fault installer, as he was doing a two person job. This goes back to the business. Contract not correct for warranty and cost, and have not received corrected contract or invoice. Did not received any operating manuals. Noticed unit appeared unlevel, confirmed this with use of level. Left voice message for sales rep Rick with concerns about install pad and unit not level, and dissatisfaction of one installer not two as stated and impact to me and my time, as well as warranty and invoice corrections needed. No acknowledgement to anything other than warranty and invoice. I have access to energy advisors and three in agreement pad and unit to be level, Especially on a new install, and that this most likely will only continue to become more unlevel over time, leaving related issues and correction to me. Contacted Trane on 7/5 and received installer guide, page 5 - pad must be level. No response to my concerns or request to address my concerns. Don’t understand how local radio station list this business as recommended to have in your home. And how do AEP customers, such as self, get full documentation from AEP approved contractor Hetter to be able to submit to AEP for a rebate, and for AEP to claim energy and emission savings due to replacement?

We've been loyal and longtime customers (2nd generation-parents were customers) of HETTER H/C. And we find this company to be highly reputable. The HETTER technicians are highly trained staff. Our service tech; Lance is prompt, professional and knowledgeable, and he does an excellent job in servicing our A/C & furnace. The office staff; Carrie and Laurel are cordial and they will answer any & all questions in detail and make scheduling appointments easy and convenient to you. HETTER H/C does quality work, and that is one of the reasons why we are loyal customers!

I had been contemplating replacing a window air conditioner and space heater in our sunroom with a ductless system for a few years. After getting estimates from some very reliable companies, I chose Hetter Heating and Cooling for some specific reasons. They were the most responsive to my quote request and most flexible when it came to scheduling a visit. The information packet provided during the quote visit was the most comprehensive. The quote arrived the evening of the visit and was the most complete of all received leaving no additional questions to be asked. The process of accepting the quote and scheduling the installation was very easy. They offered the best equipment as well as a very competitive price. The Hetter installation team was very professional and did a great job. My wife and I are very happy with our choice and would recommend Hetter.

Another HVAC company told us on a Sunday night we had a bad heat exchanger and needed a new furnace. They also told us to turn our furnace off for safety reasons so we did. We bundled up or kids and ourselves and went to bed. The next morning, my husband called Hetter to get a quote for a new system. The salesman came the same day, was on-time and even brought heaters for us to use as it was quite cold. He took a look at our furnace, called his technician, and told us we did not need a new system or a new heat exchanger. His honesty saved us thousands of dollars. We will be using this company in the future for our HVAC needs.

Two men arrived on time and were extremely professional, polite and explained everything to me. Would highly recommend.

Description of Work
Our home warranty covered the cost. Woke up one morning to find out our heat had gone out.

The Hetter technician, Ricky, came very punctually, soon after a phone call saying he was on his way. He quickly located the problem, a broken tube (plastic pipe) which carries away water produced when a furnace is running. He said he would have to get a part, and would be back later. He carefully copied the furnace model number, and later returned to install the part. Everything went smoothly, and once again Hetter has set the standard for the kind of service people want. I recommend Hetter whenever anyone asks about heating and cooling.

Description of Work
water was coming out of my furnace

The part they replaced broke four months later and they said they only warrantied it for 30 days. Which is kind of a load of crap to me. When they came out and worked on it they did a good job. They seemed very nice and everything, but then it broke. They were punctual.

Description of Work
They fixed our air conditioner