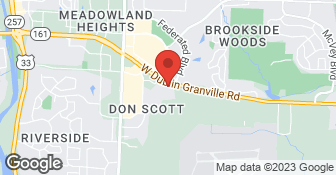 Established in 1982, Dave Fox Design-Build Remodelers has grown to be the largest provider of residential remodeling in Central Ohio. From interior remodeling to structural additions, we deliver high levels of quality and value through innovative design, exceptional craftsmanship, excellent materials, professional customer service and ethical business practices. We are a fully employee-owned & operated business. Our award winning tradition continues with recognition as a NARI "Contractor of the Year" every year since 1986, a Consumer's Choice winner, CEO - Best of Business 2008, 2009, 2011, 2013, 2014, 2015 and BBB Integrity Award winner....

They did a superb job! Very professional, friendly, made things right ,didn't argue and they're extremely easy to work with and I would trust them with anything.

Description of Work
They add on a room addition.

[Member Name Removed], thank you so much! We have all truly enjoyed working with you over the past few years and look forward to continuing to work together in the future. Always a pleasure! - You Dave Fox team
5.0

We are thrilled with the work and service provided. From beginning to end, the team was extremely helpful. I would not hesitate to work with them again or to recommend them to others.

[Member Name Removed], Thank you so much for the kind words. We had a great time working with you and your family and can't wait to come photograph this beautiful project!! - Your Dave Fox team
5.0

We started the design process in Feb,2017. We had Scott out to look at the space and talk about what we were looking to do. He introduced us to Brooke, the interior designer with whom we would be working. Our next meeting was with the team and our estimate was given and explained and agreed upon. After that, most of our meetings were with Brooke at the design studio to pick out tile, paint, tubs, countertops flooring and fixtures. Once our budget was finalized, we were contacted by Mike, our project manager from start to finish, and tear out began on time Mike kept us informed of every step and was a wonderfully calming force throughout this process. All of the sub contractors were professional and excellent with their work ie carpenters, plumbers, electricians, tile installer and painters. We are very pleased with the quality of work and the professionalism of everyone who worked on this project. It is beautiful and we would recommend Dave Fox .

Really great! The Dave Fox team was creative, helpful, professional and provided high quality service all around. The house was kept really clean throughout the process and the team was great to work with. We love our new room!

Thank you, [Member Name Removed], for the kind words. We had a wonderful time working in your home, and your four season room turned out beautiful!! - Your Dave Fox team
5.0

Much better than anticipated. As someone who has run a home building company in the past things went incredibly smooth.

Description of Work
Remodeled a screened in porch into a sunroom - a true extension of the rest of the home.

We are so glad we exceeded your expectations! It was a pleasure working with you and your family and look forward to the opportunity to work with you again someday.
5.0

Work went extremely well with support of Project Manager Dave Shicks of Dave Fox and Gregg Stadwick of Pella. All existing windows and doors removed down to original studs, which is what we wanted. Windows were located on first floor, second floor and garage. Very pleased with final product and cost.

Everything went well. Very professional. Creative design. Responsive to our prioities. The on-site project manager and construction/carpentry crew was same throughout the project and excellent. Specialists used for dry wall, electrical, plumbing, tile and painting. Most were very good and where there were issues they were minor and taken care of without problem. Probably not the least expensive resource but would highly recommend for a well managed, thoughtful and trouble-free project experience.

Description of Work
Total remodel of master bath and walk in closet. Provided full service from design through tear down to rebuild.

We started the design process 5 months before we wanted construction to begin. The design phase was great an our designers Jen and Brook were easy to work with. Construction started on time and went well for the first few weeks...then after cabinets were installed, s*** hit the fan. 1. Our project manager Scott stopped working on at our site. He would come in and poke around for an hour or two and then say he had another job to go to. I know exactly when he was here because I work from home. Scott provided us with a two week written schedule update every week, but did not stick to the schedule at all. 2. When Scott FINALLY decided to do work at our site again, after a month, he discovered that the molding had not been ordered, causing another delay. Also, one of the pantry cabinets was ordered with the FINISHED part on the wrong side. I asked Scott over and over when that would be addressed, during his missing month, but it was not until much later. 3. When the granite counters were installed, they installed the wrong sink! Then then did not want to change the sink saying the correct sink was 2 inches smaller and would not fit the opening. When I had them email me the sink specks, it was different by 1/32 of an inch. The replaced the sink. 4. Finally, after the counters were installed, they asked me for another payment. I refused since Scott had yet to do any work for a month (other than a subcontractor installing counter). At this time, I considering firing them! 5. Their manager Greg, took over the project, and within about 2 weeks were were able to move into the kitchen, with the exception of the refrigerator. The cabinet above it was too short, thus making the opening too small! We had to wait another month for the new cabinet. 6. The crown molding had to be redone 3 times by the refrigerator - once due to poor workmanship, an another time because of the change in cabinet. The final install looks like it was done by a drunk 7. In the final walk-through, more than a month past our scheduled completion date, a minor issue - a hole in the ceiling was identified - they said they would fix it. It is a month later and still no contact This job was large, but simple. We had no issues with support walls, electrical, plumbing or HVAC. None of the horrors you hear about on remodeling shows. This job was extended due to very poor project management. I know why this re modeler is overpriced...they have to do everything 3 times. Overall, the end product is great, but this company has gotten to big for them to manage. They did a bathroom for us 10 years ago and it was an excellent experience vs this disaster Follow up from my November 2015 Review on Kitchen Remodel. Just got a letter from the City about my Kitchen Remodel in 2015. Dave Fox Remodeling never had the final electrical inspection done. DO NOT USE THIS CONTRACTOR - THEY DIDN'T BOTHER WITH FINAL CITY ELECTRICAL INSPECTIONS!!!

Description of Work
Complete Redesign and Remodel of eat in kitchen and family room area.

Much of what this customer says is accurate. This project had some challenges that were difficult to remedy quickly, but the company did work through each issue at our expense to produce a result that satisfied the client. We never like when customers loose faith in our team, and that occurred as minor problems piled up. We maintained communication with the customer with our plans for corrective action and held ourselves accountable to finishing strong. The Project Manager and project team has received the necessary training to prevent these problems from repeating themselves. We are sincerely sorry that our client was disappointed with their experience, but are pleased that their satisfaction with the end product met their expectations.
5.0

We contacted Dave Fox after buying an old farm house that had not been remodeled since the 60's. There were two old bathrooms in disgusting shape and two small bedrooms we wanted made into the master bedroom. The process required completely gutting the entire thing. They were very prompt once contacted and the design process was very thorough from design to picking out everything from hinges to tile to sinks and granite. The remodel went very smooth with no cost overruns and in fact a check back at the end as all of the allowances were unused. I usually wait a year to review to make sure there aren't any problems and happy to say everything is still looking great with no problems. The company is extremely professional and was a pleasure to work with. I recommend them with no reservations. I did give a B on price as I had lower estimates but given the job that was done it seems worth the price

I have made numerous attempts to inform Angie's List that this is not a member we did business with. This member is not in our client database, nor do we do window work of this nature, and the members address is out of our service area. While the report is not bad, it would be nice if Angie's List would do more than ask me to contact this member to let them know I don't have their contact information. Great going Angie. Thanks for wasting my time.

We specialize in custom cabinets, carpentry services, wood working, and more! We guarantee your satisfaction, and we won’t leave until the job is done right. We pride ourselves on the quality work we provide, while delivering great customer service! Check out all the services we offer below and call -or- click to schedule a free estimate today!  …

CertaPro Painters of Columbus has been serving the Central Ohio and Greater Columbus area since 1994. Locally owned and operated, we are a professional house painting and commercial painting service. We have an outstanding record of customer service and industry leading expertise.  …

Bonded
Insured
All statements concerning insurance, licenses, and bonds are informational only, and are self-reported. Since insurance, licenses and bonds can expire and can be cancelled, homeowners should always check such information for themselves.To find more licensing information for your state, visit our Find Licensing Requirements page.
General Information
Free Estimates
No
Eco-Friendly Accreditations
Yes
Payment Options
Check
Senior Discount
No
Warranties
Yes

No, Dave Fox Design Build Remodeling does not offer a senior discount.

Are there any services Dave Fox Design Build Remodeling does not offer?