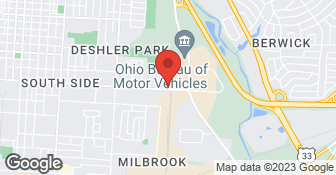 We offer estimates and quotes using video calling
We accept remote payment
All statements concerning COVID‑19 business operations and essential services are informational only, and are self‑reported and not verified by Angi.

Custom Movers LLC specializes in moving what other movers cannot. However we will move anything large or small. All of our movers are employees. We do not use temporary help....

The movers were friendly and listened to our requests about where to set up in each room. However, when we reported damages it has not been easy dealing with this company. They stated to us at the beginning that they had insurance but preferred to settle any problems without going through their insurance. It has been four months since our move and to date they have not done anything to take care of concerns/problems we had with the move. Does not speak well of this company. Really am disappointed with them. Would not recommend or use them again in the future.

Description of Work
Moving household furniture from one home to another.

I contacted Custom Movers on the recommendation of the antique store where I had just purchased a table and chairs to have them delivered to my house. Both times I spoke to Jeff, who does the scheduling, he seemed very distracted. I called on a Thursday, and the next available date for delivery was the following Wednesday. Jeff said that I could call the morning of the delivery day to find out when my 2 hour delivery window would be. He also said that he would contact the antique store that same day to arrange the pickup from them. When confirming that this would be my delivery date, Jeff said, and quot;OK, we'll see you on Monday.and quot; I had to stop him and say, and quot;Don't you mean Wednesday?and quot; And he apologized and said yes. On Monday, the salesperson from the antique store called and asked me if I had arranged the delivery with Custom Movers. I said yes and was surprised because I was told that Jeff was going to call the store after hanging up with me the previous Thursday. She said that she had not been contacted by anyone from Custom Movers, but that she would write down Wednesday for pickup/delivery on my paperwork. Wednesday morning around 9:00 I called to find out my delivery time. Even though they open at 8am, Jeff told me that he hadn't even looked at the scheduling for the day yet and thought that I would probably have my table/chairs delivered sometime in the afternoon. I told him I had to leave for work by 4:30, and he said it would not be a problem. By 3:45, I got anxious and called again because I hadn't heard anything. I spoke to a different gentleman, and he said he would call the drivers to see where they were. The two movers did call a few minutes later to say that they were on their way to my house. They were very courteous and wiped as much snow off of their boots as they could before they carefully brought in my furniture. I was pleased with the movers but not the scheduling. Noticed when I was emailed my receipt that they charged my credit card for less than I was originally quoted, so I was happy that they compensated for my scheduling frustrations. Next time I need furniture moved, I'll give my business to a different company with whom I've had better experiences even though their estimate was more than Custom Movers.

Description of Work
Delivered table and set of chairs from antique store to my home.

I have used Custom Movers in the past when I purchased a piece of the furniture from the Grandview Mercantile. This was at Christmas time, and I was surprised how quickly they were able to get me on the schedule. They did a very good job when they delivered that piece of furniture. While they were here, I asked if they did in-house moves, becauase I had a piano I wanted moved to another room and a sofa that needed to go into the basement. They said they did, so after the holidays I called to schedule the piano move. I was initially surprised that I had to wait quite a bit longer to get on their schedule, but I wasn't in a huge hurry so that was fine. They told me to call at 8 AM the morning of the move to get a better time frame for when to expect them. I called at 8 and they told me, and quot;between 12-2, and if anything changes we'll be sure to let you know.and quot; At 2:50 they still hadn't arrived so I called. The receptionist said that Jeff would give me a call back. When he called me back at 3:00 he explained that the moves earlier in the day had gone longer than expected, but they would be done with their current move in about 30 minutes and could come after that. When I scheduled the move, I specifically told them that it had to be during the school day. When I explained that 3:30 wouldn't work, he seemed very put out and scoffed at my suggestion that if they were going to be that far off schedule they should call the people with later appointments. I was surprised at their level of customer service and attitude, when we had a positive experience with them in the past.

Description of Work
This was an in-house move of a piano and sofa.

The staff was very professional and took good care of the piano. I did notice a knick on the piano, but they promptly repaired it so that it isn't noticeable at all.

Description of Work
They moved and stored our piano for four months while renovations were being done.

This company was recommended to us by the store. I had called a few other companies to compare prices and Custom Movers was the most reasonable. I spoke to Jeff several times to coordinate the move and he was very pleasant. My only disappointment was regarding payment. Jeff was aware that I was not going to be at the house upon furniture arrival - I was having a friend open the house for the movers. My plan was to pay by credit card by phone. I had been provided an estimate over the phone, but was told that the exact amount could vary depending on how difficult it was to move the piece into the home. I figured I would get a call after the move and provide my credit card number by phone. However, I was informed that the movers asked my friend to submit payment at the time of the move. I found this to be inappropriate, as I had not informed my friend that she would be responsible for this.

Description of Work
They moved a china cabinet from a store to my house.

I found it necessary to move a baby grand piano, large household furniture (such as a couch, dining table and chairs, and bookcases) and about 30 boxes of books from Wheeling W.V.to Columbus. I was seeking a company which not only moved pianos, but would be able to be a full service mover. Custom Movers LLC really did the job well. Despite the need to travel from Columbus to Wheeling, three movers came to move the piano and other furniture. They were extremely professional, bringing in special dollies for use with heavy items, and blankets to cover and protect everything. They arrived on time, moved the materials within the time estimated for less than they had estimated. Their estimate, by the owner Jeff, had been $1350-$1500. They came in at $1200 !! I would heartily recommend Custom Movers, as I had an extremely positive experience.

Description of Work
Moving a baby grand piano and furniture from Wheeling W.V. to Columbus OH.

The workers arrived on time, were very cheerful, did their job without complaint and managed to finish before the rain started. I was very happy!

Description of Work
Custom Movers moved a large breakfront, dining room table with 6 chairs, a sideboard and a large mirror from my home to a retail store. These pieces were very heavy and had a handpainted finish that could be easily damaged. The workers were extremely careful to ensure that no damage occurred and were friendly, professional, and great with my 3 year old son -- he got to get in the cab of the van and honk the horn! I was very pleased with their performance and would highly recommend this company.

They did an excellent job. None of the furniture was damaged.

Description of Work
They moved furniture from one location to another.

I used Custom Movers LLC's services twice. The first time in 2003 and again in 2010. Between 2003 and 2010, the level of professionalism and follow through has sadly deteriorated. After the last move, I took inventory and found a large wall mirror missing and items damaged. In addition, the stairway post, leading up to the second floor of the condo, was dented. When I reported the problem to Jeff Hildreth, he did not return my phone call. Simply put, I will never hire this moving company again!

Description of Work
Moving my furnishings from one residence to another

They did a great job for us. We highly recommend them. Their prices are very reasonable. We had no complaints.

Description of Work
We have a place in New York City and they moved furniture from Columbus to New York City.