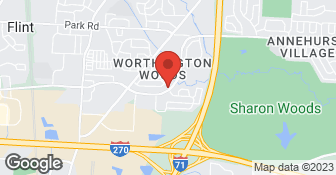 2 employees. No subs. Cost is determined by the job. No travel charges. No service fee. No extra charge for after hours service....

Really excellent work. It was so nicely built. The construction of the deck was excellent. They're very professional and they cleaned up very nicely.

Tony Puckett and his crew built us an amazing high quality deck. They created a fantastic outdoor space. We love it. They arrived and completed the work when promised. They cleaned up after when they were finished. I literally can not say enough positive things about the experience.

Description of Work
A New Deck

Tony just finished a replacement deck with benches and broad steps and a skirt around a three season porch. It looks great with wonderful details. The workmanship is top notch and meticulous. His design recommendations were spot on. If you are looking for a great deck at a great price--call Tony.

Description of Work
Replaced a wood deck and added a skirt around a three season porch.

We contacted several deck contractors on Angie's List. Tony responded quickly and agreed to build a deck according to our requirements at a price within our budget. He communicated with us during the whole project, including the permit stage. He finished on time and on budget. He delivered a product that was exactly what he promised. I would use Tony again.

From beginning to end, Tony surpassed our expectations. He built a beautiful, sturdy deck that has added value to our home far above what we paid. They were polite, punctual and professional. The craftsmanship far exceeded our expectations. From the gradual slope of the stairs to the routered edges on the railings, the final product is gorgeous.

Owner came to my house. I had pre drawn plans I wanted priced out. He said my plans that I had created were stupid and that he only builds his designs. They were lackluster at best. Total a-hole. He estimated 7500 for a 16x20 basic deck. Total joke. I ended up building it myself for 2000.

I contacted Tony via e-mail from his website and promptly received a response the next day . The new deck replaced an old 30 year deck and the entire project (including removing the old deck) took about 2 weeks. I had been interested in black aluminum balusters but wasn’t sure which design I wanted. Tony was very patient and was willing to work with me on this and I finally chose a design that had to be custom ordered.. The resulting look of the railings and balusters is fantastic. I am more than 100% pleased with Tony's workmanship and his workmanship. He is a professional and pays special attention to detail and he uses quality materials. I highly recommend him to anyone planning a new deck.

After interviewing other contractors from Angie?s List, we hired Tony to build our deck and he built an awesome deck. It was a big project that took 2 weeks. Tony did the planning, demo, building, and cleanup for a 43? x 15? deck. We are still getting compliments on how great the deck looks; people are impressed. Tony takes pride in his work, uses quality materials, and kept us informed at every step We would highly recommend Tony as a conscientious craftsman, who takes pride in his work, is honest and hard working.

I contacted Tony in February, 2015 as I was gathering estimates for patios and decks. My design options were somewhat limited due to having a pool on one side, a driveway on the other and then the garage set back facing the house. Tony promptly came out, and came up with a design I had not thought of, nor had any of the others who had come out to provide an estimate. He gave me the estimate that day and after thinking it over I decided to proceed with him and he promised to build me a beautiful deck. My plan was to have the deck completed prior to my pool opening in May. What Tony & I didn't count on was encountering a zoning issue whereby 20 feet is required to ensure maneuverability out of the garage. With the expansion of my deck by 3ft, this became an issue for a small portion of the garage door. Though I was upset, frustrated and tempted to go back to the original deck size, I decided to pursue the variance since I wanted what I wanted! It's no small feat, and takes time gathering all of the artifacts for the BZA application submission, reviewing it with a City employee and getting on the BZA agenda to appear before the committee which has specific timelines based on application submission cutoffs. That ended up taking two and a half additional months and Tony was very responsive in providing me with anything I needed along the way. He had never had a client go through the variance process, so we both learned a lot. I kept in touch with him regularly to update him on progress and he always either answered my calls or called me right back. He was extremely professional throughout. I told him to be ready to go as soon as I got the variance, and he ensured his schedule could accommodate me - he started on the deck about 2 weeks after I got my approval. As a first time homeowner, and by nature pretty curious, I had loads of questions for him along the way. He was very patient (mostly - haha) and kept assuring me he would build me a beautiful deck. I avidly watched the daily progress and could see it was being solidly built with quality materials. I also threw in a personal change control and decided I wanted decorative balusters rather than the standard wood ones. He worked with me to figure out how many I should purchase and he also ensured the gate had a latch in accordance with pool regulations. Again, because I wanted what I wanted (poor Tony, yes I'm a bit of a perfectionist as well), I also had him mount my new copper planters on the deck. Everything was finished in about a week - Tony arrived early every day and put in a solid days work. He had one person help w/the demo and one other day, but otherwise is a one-man show. I LOVE MY DECK!!! He did build me a beautiful deck - I've gotten compliments from everyone and it's totally opened up my backyard due to the design he came up with - super pleased I went with Tony and would recommend him to anyone.

I haven't received a call back. I'm disappointed after looking at the pictures of their work on their website. I understand it's a busy time of year, and I was willing to wait for a call and for the work to be done, but it has been about 2 weeks with no call.

Description of Work
I used Angie's List messaging service, then a few days later I called to request an appointment for an estimate for a screened-in porch replacement.

Why work with us? Southern Grove Landscaping was established nineteen years ago, in 1986, by a graduate from Ohio State University who studied in depth what it takes to achieve perfection in your landscape surroundings. Award-winning landscapes do not just look good for one season -- an excellent landscape should transcend the season with plants chosen for our Ohio climate and accents of stonework and design variation that command attention. That's our specialty. While everyone thinks about flowers in the spring and mowing the grass in the summer, your yard needs special attention throughout the year: during the winter delicate plants should be wrapped or transferred inside; in the spring the landscaping always needs extra special care to make sure the plants and lawn start the year off right. Summer heat means that proper watering and fertilization are important to keep plants healthy, whereas in the fall, trees and shrubs begin to go dormant, so transplantation then preven ts shock to the plant and helps to ensure healthy new growth in the spring. We are pleased to announce our nineteenth anniversary of making Columbus and surrounding areas beautiful. We're humbled by the positive response we've had from our clients and we hope to make many more beautiful landscapes for you and your families to enjoy. Give us a call and we will meet with you for a free consultation at your convenience. ASSOCIATION Better Business Bureau  …

We help people invest in the place they spend the most time. Whether we are picking up the phone or a shovel, every member of our enterprise is aligned with the long-term success of your landscape design project. Team up with Landscapes by Terra for the finest professional landscape design in Ohio. Complement your vision with our talented designers. Then, watch it brought to life by a courteous crew that keeps your project on schedule, on budget, and leaves you awake in the dream that began to take shape with our first phone call.  …

All American Home Solutions provides no nonsense solutions to everyday home repairs, services, and renovations. Local, Veteran owned and operated, we are your hometown town MVP when it comes to: Home Soft Washing Deck and Patio Washing Concrete and Driveway Cleaning Other Pressure Washing needs Custom Trim, Cabinetry, & Casework Kitchen and Bathroom facelifts Landscaping And more.. We are proud to offer veteran and first responder discounts. As well as flexible payment methods for those with fixed incomes and emergency repairs needed.  …

Custom Deck & Porch is currently rated 4.8 overall out of 5.

No, Custom Deck & Porch does not offer eco-friendly accreditations.

No, Custom Deck & Porch does not offer a senior discount.

No, Custom Deck & Porch does not offer warranties.