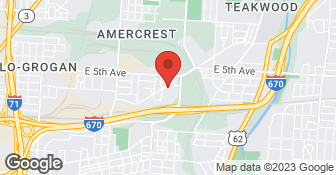 Short version: these guys were great. I had a number of items that needed to be addressed on the outside of my home, including a new roof. These guys were professional, great to work with, and the price was reasonable. I would use them again in a heartbeat! Long version: I needed a new roof (both shingles and a roll-on for a lesser sloped roof area), tuck pointing on the chimney with a new cap and vent, replace 4 areas of siding that had holes in them, new aluminum trim on my detached garage, and sealing around some older windows. Overall everything went smoothly, and any challenges were addressed in short order. The roof took longer than expected, both because of the hot sun over the two days, plus having an older house with an unexpected previous layer of shingles which made removal much more difficult. A flat roof area also had issues with a previous rubber roof install that didn't come off, and OSB was added to make the surface useable. Overall the install looks great despite the challenges. The chimney also needed some tuck pointing, as well as patching of some cracks in the concrete cap. A new metal top vent was replacing a couple of rusty old ones. To my surprise the guys came out on a Saturday to fix it up, and in the end just like the roof, the work on the chimney looks great. On a detached garage I also added some metal flashing. Unlike the main house, the trim was just painted wood. The guy did a great job adding flashing and working around gutters without having to remove them. The work came out amazing, although its a bit difficult to show in pictures. I have to give them real props for another issue I had with a secondary AC unit whose bare lines ran across the roof. There was no avoiding it - the guys had to move these AC lines as they worked, but I guess they got disturbed enough to cause the refrigerant to leak out. They day after they left, the AC didn't work and I had no refrigerant error codes. After I let them know, an AC guy called me right away and let me know that they were called in by the owner to help fix it. Cap City offered to cover the fix, and I'm very thankful for that. So many companies would do the opposite, but not these guys. In the end I opted not to fix it and replaced it with some upgraded units. Win win for everybody. It is possible it wasn't their fault, and I was wanting to do an upgrade anyway. It was not worth the cost of fixing it, no matter who was paying. Its just nice to know that they’ll be there if something happens. All in all they did a great job and I had a wonderful experience, even with the surprise challenges that come with an older house. I made a few minor changes along the way as well, but no matter the challenge, they handled it professionally and without issue. I see why they're a highly rated company, and I'm super happy to be giving them 5 stars as well! I only wish they did even more stuff, so I could call them for everything! Thanks Cap City!

Description of Work
Reshingled my house.

Excellent work by Mike and his team. Mike was very knowledgeable and professional. I would hire them again.

Mike was fantastic, always showed up on time and was great at communication. Would return calls promptly and was always courteous. The job was done on time and budget and he offered suggestions to save money as well. He didn't try to upsell me on things to make more money for himself. I felt he honestly had my interests in mind when working with me. I will definitely use him again and recommend him to others.

Description of Work
Replaced my roof

The job was done on time. Excellent employees. Would use them again.They worked directly with our insurance company which was very convenient and stress free.

I called them out as it was just time to replace the roof. They responded quickly and showed up within in day. I found their quote to be the best for the value compared to the others that I got for the same job and they returned on our scheduled time to replace the old roof with a new one. Mike took pictures of the details on the roof and showed them to me once they had finished the replacement. The clean up was amazing. No nails in the yard or shingles to be found. My daughter loved the magnet that they used to pick up nails. They did a great job and they explained everything that had to be repaired or replaced so that I understood the complete job and what it took to give me the beautiful roof that I have now.

Description of Work
Cap City Restoration replaced a roof and repaired the gutters at one of my properties.

We are very pleased with the efficiency of the work that was done. They showed up when scheduled and the work was done to my complete satisfaction. When they finished the yard was all cleaned up like nothing ever happened. I would definitely use them again and have recommended them to my friends.

Description of Work
They did a complete tear off of my old roof and replaced all the rotten wood, installed new flashing around chimney, installed a new asphalt shingle roof and also replaced my gutters and downspouts.

Working with Mike and Cap City Restoration couldn't have been better. Mike was very easy to work with, knowledgeable and accommodating. He was never pushy, very flexible and held our hand every step, from initiating call with insurance and working with them, to selecting shingles to explaining what they would be doing and providing suggestions/advice, to scheduling the work. His crew showed up and worked long. They were great in cleanup. So far we have not found one nail in the yard, which was a concern, having three dogs. Overall,, we are very happy and would highly recommend Mike and Cap City Restoration.

Description of Work
replaced roof on house and detached garage

Basement Remedy is a small, Veteran owned & operated company specializing in Historic and Contemporary Foundation Repair, Drainage, Masonry, and more. We pride ourselves in the highest quality work, backed by warranty. We are a non-sponsored company and do not install "systems." Our methods and materials have been proven over time.  …

1 employees. No subs. Charges by the job. No travel charges.  …

Cap City Restoration is currently rated 5 overall out of 5.

No, Cap City Restoration does not offer eco-friendly accreditations.

No, Cap City Restoration does not offer a senior discount.