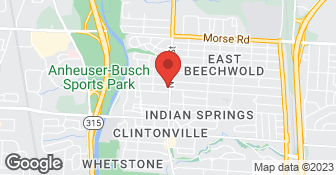 Just some of the products we offer include: Nuts & Bolts, Plumbing Supplies, Electrical Supplies, Paint & Stains, Deck & House Cleaning Supplies, Hand & Power Tools, House Wares, Light Bulbs, Furnace Filters, Garden Supplies & Tools, Fertilizer & Weed Control, Keys. Founded by Forest Smith near the end of the Second World War, Beachwold Hardware was perfectly positioned for the building boom that took place in what was then the far north part of Columbus, Ohio. Many, if not most, of the houses in the Beechwold neighborhood were built in the 1950’s and early 60’s and most of the still has hardware that was purchased at Beechwold Hardware. In August of 1965 we became Beechwold ACE Hardware. About that time Jack Smith took over from his father and operated two other stores in addition to this location. Beechwold also doubled in size to its current 5000 square feet. Still family owned, Malcolm Moore (Jack’s son-in-law) is now running the store. We pride ourselves on being a friendly, knowledgeable neighborhood store with the selection of a “big box” store but without all the walking around

The team there was great. I had a very old lamp, it was my grandmothers and needed to be fixed. they looked at it as a challenge. I thought it would take a day or two, they called me within an hour and told me it was done.

We always get excellent service and a clear update on what was done, also clarity on what the service is going to fix or not. Folks are very professional and responsive, they helped me take out the lawn in and out my car which required to take out few screws at no charge.

This is what a hardware store should be - knowledgeable, friendly staff and pretty much anything you need to fix or improve your home. If they don't carry something they will order it and they are outstanding at brainstorming options to correct old house issues. Glad they are in the neighborhood.

Description of Work
Shop here at least once a week for home repair/improvement items.

The employee, Eric Buskirk, was very conscientious and went outside to verify that the key would work before completing the transaction. It was also a good price for a chipped key.

Description of Work
They made me a chip key for my Toyota car.

Whether I need a new tool, parts of every description, length of pipe, screen repaired, lamp rewired or whatever, this is the go-to place. The staff is seasoned, knowledgeable and friendly. This is the polar opposite of the experience at most of the gigantic new hardware stores.

I brought in a lamp with a broken knob. Within seconds of having walked into the store, I was greeted by Malcolm, who instantly diagnosed what was wrong and fixed it--for eighty-nine cents. I consistently get excellent service, results, and value at Beechwold Ace Hardware.

Description of Work
Fixed my broken lamp on the spot while I waited for a few minutes.

I brought in a lamp with a broken knob. Within seconds of having walked into the store, I was greeted by Malcolm, who instantly diagnosed what was wrong and fixed it--for eighty-nine cents. I consistently get excellent service, results, and value at Beechwold Ace Hardware. I go there for all manner of home improvement and home repair needs. The staff actively seeks you out as you might be wandering around to offer concrete assistance immediately. They are knowledgeable and they consistently offer good advice to address whatever my problem might be. I'm not left wandering aimlessly looking for somebody who can help, like at the big box stores.

I was pleased. They spent some time figuring out the problem and tried a couple of different things before finding a solution. I enjoyed my experience with the people who work in this hardware store and would take a problem to them for a solution again.

Description of Work
I brought in a lamp to be fixed. They were helpful and creative in finding a solution.

This hardware store is one of a kind. Has a lot of stuff you can not find at box stores plus there is ALWAYS someone who knows older homes and what is needed for a DYI job.

Description of Work
Change carburetor filter and spark plug for a lawn mower..

They wanted to charge me over $800 to have my cats teeth cleaned. they had all kinds of reasons it costed so much like $25 for each extraction. I have worked for a Vet and I have cleaned lots of cat and dog teeth, Most of the teeth just fall out in your hands after all the tarter is gone. I took my Cat to another Vet and had the same work done for less than $200

I have a two year old lawn mower that had never been services. I took the mower to the store and dropped it off. I was told that the mower would be ready the next morning and sure thing it was ready next morning. The folks were very friendly and professional. I will surely go there again (my snow blower gave me trouble at the end of last winter - I will be taking it down to Beechwold Ace Hardware sometime soon).

I was pleasantly surprised they were able to finish the repair in an afternoon on a busy Saturday and at a very reasonable cost.

Description of Work
They successfully repaired an old lamp at a reasonable rate.

They have almost everything. You might need to ask. They also repair almost anything from around the house. They are family owned and have been in business for many years (I first went there almost 40 years ago. I've been going there for a long time sometimes multiple times per week. I also use the big box stores but whenever I can I go to Beechwold Hardwware.

They are always super helpful. As a new homeowner, I have lots of questions and go straight to them on recommendations for products from paint removal to gutter repair to gadgets, gizmos and tools. They fixed/replaced the screens from a large window and 3/4 storm door. They were prompt with fixing and well-priced. It is a great old-fashioned hardware store and have just enough of everything to meet your needs. The staff is wonderful.

Description of Work
Most recent was just purchasing items from the shop. They fixed/replaced screens for large window and storm door last year. Had keys made.

Fixed on time and at a good price

I have been patronizing Beechwold hardware for the last 26 years. They have always had what ever I have needed in the store. From nails to plumbing, windows and screening, tools, lawn mower repair and much more at very reasonable prices.

Description of Work
Cut a double strength pane of glass

The tech was very helpful finding just the right fastner to reattach my mirror to my bicycle.

Description of Work
Replaced fastner on bicycle mirror. The service tech took a lot of time finding the right fastner to reattach mirror to my bike. All for 23 cents

They call me the day after I dropped it off and said it worked fine for them and there was no charge.

Description of Work
Looked at coffee maker and found nothing wrong.

Repaired quickly and for a good price

So glad this hardware store is in my neighborhood. I drop by to pick up random stuff all the time, and they are super helpful. They also made my screens which was very convenient.

Description of Work
Created screens for my house windows.

Beechwold Ace Hardware was the first result when I searched Angie's List for Lamp Repair. Although I live on the far east side, they're located up north close to my dentist's office where I had several consecutive weekly appointments. I dropped the lamp off after an appointment one day for pickup the following week. By the time I got back home, there was a message that it was ready for pick up! Had I'd known, I'd have dropped it off before my appointment and could have picked it up the same day!

Description of Work
replaced the cord on a small lamp

Removed old gas from back up generator; removed carburetor and cleaned. Gentleman receiving my generator asked "how long the gas had been in the engine"? He seemed to know exactly what to do. I received a call a few hours after dropping off the generator telling me repairs were completed. Took the generator home and tested. Works great. No time wasted. Good value for the services provided.

If the valuable appliances at your home and business are not performing correctly, contact the pros from Mr. Appliance®. We are here to provide you with skilled, affordable services that occur on your schedule. We are here when you need us! Every one of our technicians is courteous and will show up in uniform. We also will provide you with an upfront pricing before any work begins so there are no surprises on your final bill. If you would like to learn more about the services we offer, give us a call!  …

At America’s Best Choice, our industry professionals have partnered with leading manufacturers throughout the United States to bring homeowners exceptional quality, exceptional prices and energy efficient products that will save you money. We are truly the best choice for home renovation and repair in Columbus, Ohio. The America’s Best Choice warranty offers exceptional protection and coverage provided to every customer. Each customer receives a manufacturer’s warranty that includes a Lifetime Warranty, and covers operation, parts and seal failure type of items. Customers also receive an additional supplemental warranty. The supplemental warranty adds lifetime accidental glass breakage and also provides lifetime warranty for our installation.  …

Beechwold Ace Hardware is currently rated 4.9 overall out of 5.

No, Beechwold Ace Hardware does not offer eco-friendly accreditations.

No, Beechwold Ace Hardware does not offer a senior discount.

Are there any services Beechwold Ace Hardware does not offer?