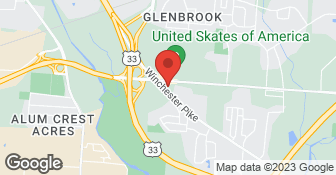 No subs. Since 1984, Air Supply has been taking care of Central Ohio's comfort needs. With Service You Can Count On, your friends and neighbors have depended on us for all their indoor air quality needs. Whether it be for routine repair or maintenance, new equipment, or our duct cleaning service- Your family can rest assured when our trained and certified technicians from Air Supply help you create an optimal living environment. Charges by time & material. Ask about Angie's List discount on service calls & $50 air duct cleaning discount....

Accurate Electric Construction, Inc., proudly serves its customers with pride, integrity and attention to the details that matter most to you. This is one of the many things that sets us apart from the rest. We are locally owned and operated. Give us a call today!  …

The technician was very rude, his name was Josh. He had it running and he shut it off. My insurance covered the cost, but these guy just top the costs. They lied and trump up costs for their customers. They tried to get more money than the cost of the service for the insurance to pay them.

Description of Work
They should put the wire back to the thermostat.

There was no thermostat on the wall and thermostat wire was broken. Repair was not authorized by his warranty company and Mr [Member Name Removed] continued to use inappropriate language at both office staff and the technician. We notified him that we will no longer service his rental properties. Also the client paid 0
5.0

I called in Friday morning with no heat and they were out by one. Got it working and had to order a part. Scheduled for Wednesday morning and showed up at 8:15 am and were done in 20 minutes. Everyone I dealt with was professional and very friendly. Very happy with service especially with record low temperatures.

I was told by another company that I needed a replacement part on my whose-house humidifier and that, at the cost the replacement part would be, I should just purchase a new humidifier. I obtained quotes from several companies for a new humidifier and decided to use Air Supply. When I scheduled the appointment, they could only give me a timeframe of several hours but agreed to make mine the last appointment, as I had requested, and to call me 45 minutes prior to the technician's arrival so I would have enough time to get home from work. After looking at my unit, the technician suggested that I didn't need a new unit and that a replacement of the solenoid valve would be more cost-effective. He attempted to just repair the part to save me even more money, but that was unsuccessful. I agreed to go with his recommendation of replacing the valve versus buying a new unit, so I made another appointment with the same accommodations I had the first time. He replaced the valve and the feeder tube efficiently and instructed me how to use the unit, as it had been several years since it had last been operated. He also relocated the humidistat so it would give work more effectively. He was patient and professional.

Although my mini-split was less than 7 years old, Lennox no longer offered the replacement part that was required to fix the leak in my unit. Angie negotiated with Lennox to obtain a new unit, free of charge. Angie and the Air Supply team continue to go above and beyond in the area of service and customer experience. This is why I have used them for service and annual maintenance for the past 12 years. The technicians are knowledgeable, trustworthy and professional. The office staff is friendly and easy to work with. They take the time to explain the issue and answer questions, and I always feel like they have my best interest in mind. I highly recommend this company.

Description of Work
A mini-split that the company installed a few years ago developed a leak that required the unit to be replaced.

It was installed in a timely manner and passed inspections

My furnace went out in the middle of the night on a Sunday, before a Monday federal holiday. I spent that day trying to troubleshoot the issue myself. The furnace was under warranty, and I knew my warranty company wasn't open that day. I figured out that the inducer motor on the furnace needed to be replaced. That part for my furnace retails for $300-$330. My warranty company instructed me to hire my own contractor off of Angie's List, and I would then be reimbursed. I chose Air Supply because they were at the top of the list, had an "A" grade, and had a lot of good reviews. They were also not too far away. I called in for service and explained my situation. The earliest they could come out was the next day, and I was okay with that. I gave the office staff the make and model of my furnace, and explained the repair/part needed. I called the next day to confirm my appointment, and reminded the rep of my make/model/issue/part. I wanted confirmation that they had that information, and that the serviceman would be prepared to actually fix the furnace when he showed up; not just look at it and require parts to be ordered for a return trip. She confirmed all of my information and stated that my issue/part was "common", and that the service techs carried those on their trucks. The service tech arrived with no knowledge of my issue OR the part. The office didn't inform him of anything other than my name and address, and he didn't have the part. In fact, he stated that inducer motors are NOT common; they are very specific to individual furnaces, and he had no idea why I was told otherwise. He called in immediately to talk to the office rep about the misinformation and asked her to order the part from their supplier. I overheard her tell him that they would have to come back the next day (Thursday), Friday at the latest. I voiced my displeasure at being misinformed/lied to, and the fact that I had to pay a $95 service call for him to spend fifteen minutes putting lubricating oil on a spindle. He assured me that I wouldn't have to pay the service call fee for the return trip -- just for the part and his labor, which he stated would take less than thirty minutes. The office rep called me the next morning to get authorization to order the part. I asked her how much money we were talking about for the repair, and she replied, "the motor will be $456 and labor would be $22.50 per quarter hour." I was in disbelief at the cost. I asked why she quoted a price that was $150 more than the already marked-up retail price of $300 it goes for. I declined their service, expecting to just fix it myself. She called back a little while later and left me a voicemail to tell me that she "got permission from their warehouse to sell the motor at a discounted price of $346. Considering I had already spent $95 for basically nothing, and I would be reimbursed, I reluctantly accepted. The serviceman showed up the next day as expected, and spent about fifteen minutes to swap out the inducer motor. As I was looking over his invoice, I noticed he charged me $90 for labor. I questioned that charge, and he explained that I was being charged from the "time the call was initiated" (they called me 30 minutes ahead of arrival to make sure I would be home), and the 20 minutes he wrote down for labor (which I am certain was closer to fifteen minutes) he rounded up to 30 minutes. So, when it was all said and done, I paid $531 and change for a job that, had it not been a warranty issue, I would have done myself for $300. And, had they come prepared on the first day as I was assured would happen, I should have only been charged $441 ($95 service call + $346 part). Had I not stood my ground on their original quoted price, the final bill would have been over $630! Needless to say, I am NOT a satisfied customer. I firmly believe they were taking advantage of my situation and the fact that it was a warranty repair. They did EXACTLY what was needed to maximize their profits in my situation. Yes, they were pleasant to talk to and professional with regard to their interactions, but the same could be said about a con-artist who smiles and is charismatic as he picks your pocket.

Description of Work
The inducer motor on my furnace went out. I had them replace it.

While we have apologized for the mix up several times our dispatch notes indicated the client called in for service and a "motor" failure not an inducer motor. While we do carry universal blower motors on our truck stock the combustion/induced draft motors are OEM. The technician was able to get the clients furnace heating and recommended replacement. There was no obligation for the client to purchase the replacement motor from us as he could wait and schedule through his warranty/insurance company since he once again had heat.
5.0

The water issue was determined to be caused by another issue so no work was needed. We found them to be responsive and professional.

Description of Work
We asked for an estimate on replacing the A/C line due to some water damage we believed to be coming from that line.

Description of Work
It was just a tune-up.

Excellent. The representative was thorough, gave more than one option, including a temporary solution and a long-term more costly solution.

Excellent service. Nate went right to work. He dismantled the top portion of the furnace and discovered debris. He cleaned the debris thoroughly and my furnace works! Thank you!

Description of Work
Furnace was leaking.

Window & through the wall air conditioners nor mobile home systems.