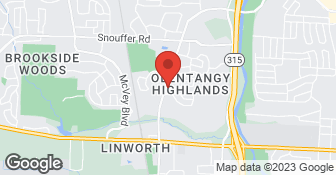 Our Team Excels in Irrigation Installation, Service, and Backflow Testing. Westerville, Powell, Dublin, and Worthington were the start for Absolute Irrigation in 2002. Our service area has grown to New Albany, Lewis Center, Delaware, Upper Arlington, Columbus, and beyond. 100% Work Ethic, Quality Products, and outstanding customer feedback, has made Absolute Irrigation Central Ohio's Premier Irrigation Contractor. Our systems not only save your yard and landscaping from the heat of summer and unpredictable weather, but also save you time, money, and peace of mind. Our experienced crews use only the highest quality parts, whether we’re installing a new system or repairing a system installed by another company. Because of the trust we have in our knowledge, craftsmanship, and parts, we offer a 5-year parts and labor warranty on all new installs. If you are considering a new irrigation system, or need your current system serviced or repaired, please give us a call....

I have used Absolute for several years to open/close my system. They did well enough, but things were always a bit off and I finally cut bait after my last experience. Over the years they have done winterization and inevitably the back-flow explodes over the winter and needs to be replaced. Obviously the system wasn’t winterized properly. They were never bad enough to look elsewhere and convenient enough, so I let it go. This past winterization trip I could tell that the technician had missed several zones as my phone alerts me in real time as to when a zone runs. When I went to talk to the tech and mention he had missed a few zones, he started slamming things in his truck. He was angry with me - why would I have zones disabled!? The order was for five zones?! That zone doesn’t show up on my phone!!! I was aghast. Huffing, puffing and slamming the air hose around, the tech reconnected and blew out much of the same zones again yet not some of the ones I mentioned he missed. Later the tech texted me that he isn’t “usually short” and apologized. Thanks, I guess. I immediately emailed the main office and their response was to get me scheduled two weeks out to have it redone by another tech. No apology. No explanation. No back pedaling. No mention of having addressed it with the employee. I told them to forget it and I would look elsewhere. At that point I got an apology for the “miscommunication”. There was no miscommunication. Their technician was simply out of control and over the line over nothing. It’s irrigation. It’s a 10 minute job. It’s easy. If I had a big air enough compressor I’d do it myself. It’s not supposed to be an emotional or hostile interaction. Customer service is easy. You apologize, eat crow, and get the customer into the schedule that day to make it right. There are so many irrigation companies, it’s not worth the heartburn to deal with whatever is going on here.

Everything was set to go on Aug 1st. I checked with him the day before as to arrival time. I asked that he come a bit early as I wasn’t able to be there. He asked me to call him to come over that night but I was at a function and couldn’t. His response? “I’m moving on. Good luck.” Very unprofessional. Also didn’t want to give me a quote with our agreed-upon price until after the job was done. Felt shady.

Robert repaired the damage on short notice. Timeliness has very important because the primary contractor could not proceed until the irrigation lines were repaired. His quick response was greatly appreciated.

We appreciate your review! Thank you!
5.0

Robert was excellent. He was extremely knowledgeable about what needed to happen. He arrived at 7:30am and said it would be finished that day. He and a coworker stayed until 8:30pm to get the job done. We basically had to have a new system installed. His follow up skills were excellent as well. I would highly recommend Absolute Irrigation for a new installation or a repair.

We appreciate your review! Thank you!
5.0

Thank you for the great review! We really appreciate it and value our customer relationships!
5.0

Service is very responsive. I am alwasy home when they come and walk me through. Very fair price.

Description of Work
They come to my house 3 to 4 times a year for irrigation.

Thank you for the great review! We appreciate your taking the time to rate us!
5.0

They are excellent and reliable. I have used them for about 8 to 10 years and I will continue to use them. I would highly recommend them.

Description of Work
He handles my underground sprinkler system. He comes out in the spring and the fall and maintains everything.

Thanks [Member Name Removed] for your kind words and great review! We enjoy working with you!
5.0

Everything is done to the highest level of quality. The owner, Robert, will make sure you are satisfied with their service. Excellent company to work with.

Description of Work
They installed my irrigation system over 10 years ago and have maintained it ever since. They also do my back flow testing and lawn aeration. Excellent company to work with.

Thanks [Member Name Removed] for your great review! We strive for total satisfaction and love our great customers!
5.0

The work was performed timely and the irrigation system worked well throughout the summer. The office staff notified me in advance before performing the work. The technical staff were courteous and efficient.

Thank you for your nice review!
5.0

We started working with them a year ago to get our system up and functioning and they have been our go to for anything we need. Pricing is great and the techs are friendly and experienced.

Thank you for your nice review!

Christian lawn care. Only 2 employees. 6 step fertilizer plan available. Now offering mowing. We guarantee your satisfaction and we won’t leave until the job is done right. We pride ourselves on the quality work we provide, while delivering great customer service! Check out our services offered and call or click to schedule a free estimate today.  …

If you're looking to have a healthy, well-maintained lawn and landscape, but don't want to resort to using harmful chemicals, we can help. Since our founding in 1999, our organic experts have been using natural, plant-based products to provide our clients with Organic Lawn Care, Organic Tree & Shrub Care and Organic Pest Solutions. Enjoy peace of mind knowing your yard is safe for your family, pets and our environment. Central Ohio homeowners in Columbus, Dublin, Westerville, Worthington, New Albany, Bexley and more, can turn to Good Nature Organic Lawn Care in Columbus to keep your yard beautiful, naturally. GET A FREE QUOTE TODAY www.whygoodnature.com/get-quote.  …

We help people invest in the place they spend the most time. Whether we are picking up the phone or a shovel, every member of our enterprise is aligned with the long-term success of your landscape design project. Team up with Landscapes by Terra for the finest professional landscape design in Ohio. Complement your vision with our talented designers. Then, watch it brought to life by a courteous crew that keeps your project on schedule, on budget, and leaves you awake in the dream that began to take shape with our first phone call.  …

Absolute Irrigation Inc is currently rated 5 overall out of 5.

No, Absolute Irrigation Inc does not offer a senior discount.

No, Absolute Irrigation Inc does not offer warranties.

Are there any services Absolute Irrigation Inc does not offer?