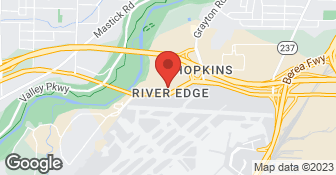 He broke up the pool, covered it up and grated the yard.

We asked Ullrich to give us his opinion and to provide an estimate to prevent our backyard from flooding. The company owner came and looked at the backyard, discussed our options and indicated he would provide us with his estimate. After that we did not hear from him for a month at least. I called several times to no avail. I believe it was over two months before we finally received his estimate. Ultimately, we did not use his service.

Description of Work
We were looking for an expert opinion on how best to repair our backyard which was subject to frequent flooding.

This was a massive undertaking but given John's extensive experience we felt comfortable hiring him. He was incredibly professional and I am elated with his work.

Description of Work
John Ullrich removed our 1960's family fun pool and deck and then leveled the ground and seeded it. He also coordinated the sub contractors for the electrical and plumbing work. He also arranged the inspections with our City engineer and planted a few trees where ones needed to be removed to enter the pool area. He did an amazing job and left our grounds in great repair.

The entire project was completed efficiently and promptly. The pool removal project was completed with little impact on the rest of my property. The finished project is amazing. There is no indication of there ever being a pool. The extended lawn will be lovely once it is fully grown. I appreciated the level of communication from John Ullrich as the project progressed. I was informed of each step of the process. I would recommend John Ullrich to anyone considering removing a swimming pool in the future.

Description of Work
John Ullrich removed an old, non-functioning inground pool in my back yard. He was both professional and prompt. The project was completed in less time than expected. He finished the project by planting grass and adding fertilizer.

John came out promptly and provided a detailed estimate of exactly what he was going to do. Included with the estimate was a list of references, something I did not get from any other contractor. All references were contacted ? all had nothing but good things to say about John and his work. John knew the exact weather conditions under which he could start the job without causing significant damage to my lawn - rain delayed the start of the job for 5-6 weeks. Due to the heavy equipment involved, there was some damage to my lawn ? the estimate John provided included topping off the damaged area with top soil and grass seed. Before beginning the job, John obtained the required city permit and worked with the city building inspector throughout the job. He and his crew knew exactly what they were doing and completed the job within 4 working days. Work was completed exactly as stated in the contract and to perfection. Due to the slope of my yard, the city engineer required that the area have specific grading. John graded the yard as required and the inspection was completed / approved by the city engineer prior to completing the job. We could not be happier with the job that John and his crew did ? you would never know that a swimming pool ever existed in my backyard.

FILLED IN A SWIMMING POOL FOR MEMBER. KNEW JUST WHAT HE WAS DOING AND DID AN EXCELLENT JOB.

For the fastest service please CALL to schedule an appointment or estimate (216-365-0600). As a Multi-Year Super Service Award Winner, The Plumbing Source is TRUST WORTHY, family owned and operated with over 34 years of industry experience. We are much more than a plumbing company because we offer services ranging from PLUMBING, EXCAVATION, HEATING and COOLING, to total BATHROOM REMODELS! We are large enough to serve your needs, while small enough to care about building a relationship. Greg Faustina, the owner, is a master plumber and is actively involved and past officer of PHCC (Plumbing, Heating and Cooling Contractors of Ohio) to exceed quality standards. All employees are uniformed and randomly drug tested. Technicians are trained every two weeks on the latest to ensure you are getting the best service. What sets us apart from our competitors is our AVAILABILITY to our customers (when you call us, you will talk with a live person 24/7), our commitment to use HIGH QUALITY MATERIALS and LABOR, and most importantly….our commitment to our customers! Water damage can ruin a home. Trust our LICENSED, BONDED, INSURED professionals in your home for long lasting results. It is our goal to build a relationship with our customers that will last a lifetime. We would love the opportunity to partner with you and all of your home improvement needs.  …

Over 16 years of experience, we are your local, trusted premier deck builder. Decks is what we eat and breath. This is our career. The business phone number is 440-886-3325. Unfortunately we don’t do deck staining or painting with power washing. We build new and repair old decks  …

How is Ullrich Excavating overall rated?

Ullrich Excavating is currently rated 4.9 overall out of 5.

What days are Ullrich Excavating open?

Are warranties offered by Ullrich Excavating?

No, Ullrich Excavating does not offer warranties.

What services does Ullrich Excavating offer?