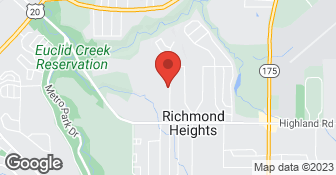 Here at Insect X Pest Solutions LLC, we are more than just a pest control company and we are about more than just exterminating insects. We are determined to become an industry leader in the pest control industry by offering great quality service and solutions to our customers. We are unable to fully accomplish this by ourselves and we need your valuable assessment of our company to help us know where we can improve

Contractor showed up when promised, was professional, and did a thorough job. He also inspected for other possible nests, none found.

Description of Work
Had hornets and yellow jackets on second floor exterior of my house. Needed them neutralized.

Description of Work
The gentleman oilled two different yellow jacket nests. All went just as he said it would. This is the second time we have used this company.

The guy was friendly. I like that he came quickly. He explained exactly what he was going to do and he did it. The first time a lady came about 2 years ago. I have these bees that like to build a nest beyond this wall on the outlet outside and to get rid of the bees she has to drill into the wall on the other side. This time when the guy came he said he didn't have to do all that and he got a different stuff. To tell you the truth I didn't believe him. He sprayed it around there to see how the bees were coming out. He sprayed and said it will be gone in 24 hrs. About an hour after he left, I went back into my bedroom and I was banging on the wall. All of these bees came out and I was so mad. Then I picked my kids from daycare and I came back. I banged the wall again and I ran outside to see it. There were only about 5 or 6 bees that came out. Within a couple of hours noticeably they were dying. So I really like him. About 2 yrs ago when they took care of the beehive, they told me that in the spring they could come out and wash my house. I don't have to worry about any kind of bugs or spiders or ants or anything inside and outside. I did that last year and I think it was $225. There was another company on Angie's List and it was $199 for 3 services. I thought I can get Insect X Pest Solutions once or I can get these people come out 3 times for less than that. This is great. I bought that one for $199 and I was pleased with the guy when he came out the first time. Couple of weeks later I saw these cobwebs with spiders in the grass, there were spiders even in the garage and I saw ants in the kitchen where he had sprayed. I thought this is not good. That guy who came out the first from the other company, I didn't want the bees coming back and there was a nest in the light so I told him to spray some stuff at that light and I had him spray in the house. About a month later I still had to call Insect X Pest Solutions to have them come and take care of the problem. Cheaper is not always better and I am just going to call Insect X Pest Solutions. I don't have that problem and there's nothing. I called him and he came. I bought these 3 treatment applications from the other pest company. I arranged the first time and they showed up when they wanted to, the second time. I didn't like that. They should have come when I wanted them to come. The price is a little high with Insect X Pest Solutions but I get what I pay for.

Description of Work
Set traps outside for mice...second visit where he refilled the traps

The buyer's inspector said there were ants in the house. InsectX came out and did whatever they do about ants--sprayed stuff, I think. As the house is sold, I don't know how well it worked, but they had a 6-month guarantee that applied to the buyer. Very professional, friendly, on time.

Description of Work
Find and get rid of ants.

He came back and didn't charge me about a week later when I saw several bees going under the driveway. He had sprayed the hole by the driveway going into the garage and came back and sprayed for free when I saw a few bees coming out of the driveway in another spot. Very friendly and seemed to know his business very well. We would recommend him and will use him again.

Description of Work
Sprayed in the yard for hornets and carpenter bees around deck. Called back immediately, did the job as promised.

We had a problem with ants. He sprayed for ants. He was a very nice guy. He was very prompt. It is a long lasting solution.

Description of Work
Insect X Pest solutions is an exterminator service we used In April.

He did an inspection and set multiple traps.

Description of Work
I had a critter in my new home in the floors.

Came out and and sprayed for bees inside the siding of my house. Did a great job there are no more bees.

Description of Work
Disposed of bees.

WE E-MAILED DAVID ON A SUNDAY NIGHT and HE CALLED BACK WITHIN A HALF HOUR and SET AN APPOINTMENT FOR 9 AM MONDAY. HE WAS ON TIME and COURTEOUS. HE THOROUGHLY INSPECTED BOTH THE OUTSIDE and INSIDE OF THE HOUSE. HE EXPLAINED EVERYTHING THAT HE WAS GOING TO DO and SPENT A COUPLE OF HOURS COMPLETING THE WORK. THE PRICE WAS A BIT MORE THAN I EXPECTED TO PAY BUT IT IS FOR AN ANNUAL EXTERMINATION PLAN.

Description of Work
EXTERMINATION OF MICE IN DROP CEILING OF FINISHED BASEMENT. DAVID INSPECTED THE OUTSIDE OF THE HOUSE & SEALED/CAULKED ANY OPENING WHERE MICE MAY GET INTO THE HOUSE. ALSO SPRAYED AROUND THE PERIMETER OF THE HOUSE. INSIDE HE SET BAIT TRAPS THROUGHOUT THE BASEMENT. HE COMES TO THE HOUSE REGULARLY TO CHECK THE TRAPS. AFTER A COUPLE OF WEEKS OUR PROBLEM APPEARS TO BE RESOLVED.

D-BUGZ Pest Control LLC provides safe and effective insect and rodent pest control services. Whether you have mice or rats in your attic or at your business location; bed bugs at home, or bees in the backyard, our certified and trained pest management specialists provide discreet and efficient pest control at reasonable rates. We have over 25 years of pest control service experience and the best customer service. We also provide quality service using the best product for each job to give our customer a peace of mind.  …

Insect X Pest Solutions is currently rated 4.9 overall out of 5.

No, Insect X Pest Solutions does not offer a senior discount.

No, Insect X Pest Solutions does not offer warranties.