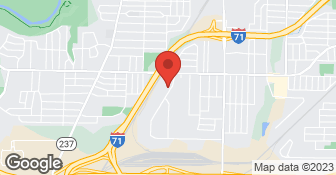 It went great Chuck from Patriot Pest control answered my call and came out. Great guy.

Description of Work
I needed a flea exterminator

I contacted the company via email and received a prompt reply to all of my questions. It was nice to receive a quick response! The work was completed on the date scheduled and the service technician was friendly and professional.

Description of Work
I needed the house foundation treated/sprayed to keep insects/bugs out.

He was prompt, friendly and professional.

Excellent job. Very professional. Very punctual. Cost was very reasonable. Tech sprayed second floor nest (which was inside the roof structure) from ground with powerful sprayer. Indicated that wasps would be eradicated within 2 days - and they were. Had one follow-up when 1 lone wasp was seen / the company juggled their schedule to make a tech available the day I called to puff-spray from the inside - and that took care of the problem. Excellent follow-through. Great job and will definitely use them again.

Prompt service. Called us late in the day to let us know they had identified the type of insect and recommended ways to avoid in the future. Great people.

Description of Work
Treatment for insects in house

In both instances, the services were scheduled quickly, the employee sent to the home was friendly, professional, assessed the situation and efficiently handled each problem. I was very happy with the service and impressed that the work had a 60 day warranty. Thanks, everyone.

Description of Work
Week 1: removal of two wasp nests under the eaves of the roof. Week 2: dealing with a newly discovered large yellow jacket nest under a hedge.

I recommend General Pest Control very highly. Their technician Brett responded quickly when I called about finding carpenter ants. He explained the treatment to me, and clearly was an expert. Brett even came back for a follow-up visit to verify the ants were gone. I plan on looking into a seasonal contract with them - great service, and I recommend General Pest Control highly.

Very professional and knowledgeable. Will retreat if needed but so far so good.

Description of Work
Treat for ants in kitchen

The technician, Gene, was a great guy. He was very personable, knowlegeable, and professional. I wouldn't hesitate to have him come back to my home to perform future pesticide services, should the need arise. He'd be the first person I'd call.

I had ants here for the first time this spring. They put out an ant trap that didn't bite. They sent someone back out here and he said he's an ant expert and he will get rid of them and he did. He did a good job. The only thing I didn't like was one time I cleaned my windows and they came that Monday and sprayed around windows and messed them all up again. Besides that one time, they do good we have a contract with them.

It went well, he arrived the same day I called and also checked the house and blocked any entry points where pests could possibly get into the attic.

Good, but the first appointment was a Saturday no show. I called to complain and was excellent after that point.

Used this company last year for emergent situation and they were wonderful! But, when I attempted to price and schedule service for this year, the employee that I spoke with appeared almost disinterested. I was told that the individual that I needed to speak with had stepped out and would call me back. two days later, I phoned again and was then told that they were booked until the end of the next week. Having family with extreme bee allergies, we chose to go with another company. Very disappointed because the technicians are wonderful!!

Description of Work
Spraying for bees/wasps.

[Member Name Removed], I am sorry this happened. All of our customer service reps can price and schedule work right over the phone with you, as you would have experienced last year. I am not sure why they would not have done this with you this year. While we cannot make up for the poor customer service you experienced with us we will use this as a training experience with the staff. John Gedeon
5.0

dusted once in the rain. returned 3 days later per our request to redust. seems taken care of.

Great! Once again I am more than impressed with this company. This is the second time I used them (first ended up being a squirrel, which they don't actually deal with, but see my other review for how that visit went). This time I had rodents in the home. The inspector looked around, confirmed that it was rats and not mice, set some traps, and left. Within an hour after he left, I heard a trap snap; we had caught a rat. He came back the next day to remove the dead animal, and while he was there I happened to mention that I had an ant problem after he saw an ant crawling on me in the house. I was trying to deal with that on my own for a few weeks, using ant poison from Target as I had in the past, but had not yet been successful in eliminating them. He promptly went to his truck and came back with a different type of trap with professional ant poison for me to place in the bathroom, and also treated the outside of the house, at no charge. A few days later, my ant problem was gone. Meanwhile, there has been no further rat activity, so that problem is eliminated as well. In short, not only are they effective, the customer service is outstanding! You can't go wrong hiring them.

Great! Glenn was on-time, polite, and professional. Thanks so much!

Fantastic! He was very polite, professional and helpful. And, in spite of having done the complete inspection and helping me with the entry points, there was no charge! General does not handle larger animals and thus no additional treatment was possible, so he didn't charge me a thing. I was fully prepared to pay for the inspection and his time.

Description of Work
I had scheduled an inspection and treatment for rodent control, having heard scurrying in my ceiling. The technician came out, did a full inspection, and ended up concluding that I did not have small rodents, and nothing in the house, and it was probably a squirrel or similar size animal that was only in the cavity above the ceiling. He placed newspaper in some gaps in the eaves that are the likely entry point; I can watch to see if it is disturbed to verify that is where something is getting in and out, and then add a more permanent screen in the future.

We contacted General Pest to come and spray our cedar siding house. They came and quickly gave us quotes on different services they offer. We opted for a seasonal spray which covers a treatment in the spring and one in the summer along with any needed additional sprays through the summer season. We only need the 2 standard treatments but the service was well worth it. We did not have any excessive insect activity and for the August visit General Pest came without us having to schedule an appointment. I am very satisfied.

Description of Work
Seasonal pest spray on our home

[Member name], I am glad you are satisfied with the service you have received thus far. I have activated the online account access and you should be able to login from now on. If you need any assistance with that please give us a call. Thank You. John Gedeon
4.0

Fine! Nice people. I will know more if and when I need them to do actual work.

Description of Work
Inspectiono as agreed.

When we have issues on the inside of our house, they come out. The price is average. Their service is good.

Description of Work
I use General Pest Control. They sprayed on the outside of our new home.

It was a Big Deal purchase. There was no extra charge. It was a good service. The price was average.

Description of Work
They sprayed on the outside of our home.

Wonderful as always! We have used General Pest for over a decade. They are always prompt, professional and they take care of the problem!

Description of Work
Sprayed for spiders and crawling insects.

I called them about a significant number of flies. They asked me to describe the flies, I did. They spent the time to explain I needed to find the source. Through talking to them, I remembered there was a dead bird in my yard several weeks prior. They told me to get rid of the source, which I hac done already. They indicated there was no need for them to come out and no need for me to spend any money. They were absolutely right. I was so pleased with how helpful they were.

Description of Work
They advised me that how to deal with my issue without them having to come out. They could have wasted my time and money and came out, but advised me that I could correct my situation on my own!. I will be calling them again if I ever have a need for an exterminator again!

Technician arrived promptly at appointment time. Was extremely professional and helpful. Good communicator. Explained everything in detail. Made helpful recommendations. Discussed potential treatments with me and we jointly decided on the course of action based on the options offered and my preferences. Couldn't be more pleased with the visit and peace of mind knowing that with our very reasonably priced annual contract (we received a late season discount) the company will provide follow-up visits both at regularly scheduled times and also will make special appointments in between regular visits at our request if any issues arise. Technician was very careful to look out for our home-grown herbs and any other potential food sources which his spraying could adversely affect. Good at explaining safety issues and letting me know when it would be okay to work in the yard after spraying. Very respectful of my home. Very pleased with this company and the highly professional, knowledgeable technician (Kieran). Also very pleased with the helpfulness of the woman who took my initial phone inquiry -- she provided detailed information about their services and scheduled a technician to visit us within 2 days of my call (sooner than expected!).

Description of Work
Seasonal contract/first visit. Conferred regarding existing and potential pest issues, examined premises (both external and internal), offered information about issues and how to resolve, sprayed outside of home for both prevention and treatment of pests, set traps for mice in crawlspace and garage, "bombed" garage attic, identified and fixed a potential mouse entry point in hvac hookup, advised about another potential entry point, provided detailed information about new annual contract and services.

D-BUGZ Pest Control LLC provides safe and effective insect and rodent pest control services. Whether you have mice or rats in your attic or at your business location; bed bugs at home, or bees in the backyard, our certified and trained pest management specialists provide discreet and efficient pest control at reasonable rates. We have over 25 years of pest control service experience and the best customer service. We also provide quality service using the best product for each job to give our customer a peace of mind.  …

General Pest Control is currently rated 4.8 overall out of 5.

Are there any services General Pest Control does not offer?