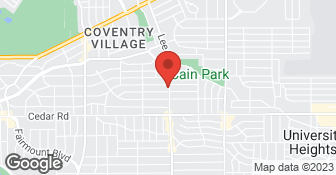 We are a Company that will enhance your life with are low price , a high price RESULTS !! We get the JOB done and OUR CUSTOMERS are always SATISFIED !!!...

I contacted Enhanced Renovations and spoke to Darrell White regarding driveway crack repair. He came out with his business partner, Harold White, and we agreed on $850.00 for the job. I paid him $450.00 in advance on 4/20/2012 to come out and do the work the next day. He said his crew would be there at 8:00 a.m. 8 o'clock came and went and by 9:30 I was calling to find out where he was. I kept getting voicemail and I left a message. At some point I was able to get ahold of him on the phone (since he wasn't returning my message) and I asked him where he was. He said they ran into issues with their truck and they would be at my house by noon. 12 o'clock came and went and by 3:00 I was calling and asking if they were going to make it. Then they stopped answering the phone. End result- an entire day wasted. I get a call the next day in the evening saying he apologized and they would come out and do the work that following week which they did. I paid him the remainder of the balance of $375.00 (-$25.00 for the inconvenience) He said if there were any issues to give him a call. He ended up losing the check and I wrote out another for $350.00 (-$25.00 for the stop-payment fee). After a week or so, I called Darrell to notify him that there was some surface cracking appearing on the surface of the patches (they were cured in very hot weather). He said he would take a look and put another layer of patch on. I told him if he needed to wait until the heat wave broke in order to cure the patch properly that was fine with me. I waited until the heat wave passed and the weather became more optimal for curing and tried contacting him regarding finishing up the job. He said he would be out to put the final touches on. The appointment time and day came and went with me trying to contact him throughout the day to see where he was without being able to reach him or anyone else, for that matter, at 3 different numbers. Since then, this has been the story. I try contacting him and after several attempts calling 3 different numbers, we set a date and time and he's a no call/ no show and I can't get ahold of him. Now, he and his business partner, never pick up or answer any messages. They've written me off completely and have all my money. One really poignant example of them blowing me off that I can recall is one of the times we scheduled on the Thursday preceding the Saturday they were supposed to come out. Another no call/no show and can't get ahold of them throughout the day and even a few times I tried contacting them the following day. I get a text message a couple of days later from Darrell saying he "was on vacation." Soooo.....he didn't know that he was going on vacation 2 days before scheduling to come out? I have just recently filed reports with the Better Business Bureau and the Ohio Attorney General. I hope to recover $400.00 of my money so I can pay another contractor to come out and finish the work. My final assessment is DO NOT use this contractor or only agree to pay them in full after a reasonable amount of time has passed after they finish the work to ensure everything is done correctly and sound before giving them the 2nd half of the payment. Once they get full payment you can forget about trying to get ahold of them if you need them to come back out to address any issues.

Description of Work
I contracted Enhanced Renovations to clean and apply vinyl crack repair patch to extensive cracks in my concrete driveway that resulted from settlement.

Nick knows houses and buildings. He has been serving the housing industry for over 25 years. Nick graduated from the Westside Institute of Technology Building Engineering Program and has applied this expertise to local building structures and the waterproofing profession for over 10 years. He has been a loyal resident of Cleveland his entire life. He serves his community with honesty, hard work and integrity. What does this mean to you as a customer? You can count on us being: • Reliable • Knowledgeable • Having Integrity • Us producing Long-term benefits for your home’s foundation Business Stability: Owner Nick Berardi has been in the waterproofing business for over 10 years, owns his own equipment and has two teams of dedicated employees (no sub-contractors). His work crews are dependable, and many team members have a history of longevity with NB Enterprises. Personalized Customer Service --A trademark of NB Enterprises-- Nick personally supervises each site to ensure that all questions get answered to the customer’s satisfaction and that the work quality exceeds customer expectations. Nick believes in educating his customers about the long-term benefits of exterior waterproofing. Give us a call to benefit from the experience and expertise Nick and his team has in Waterproofing!  …

All statements concerning insurance, licenses, and bonds are informational only, and are self-reported. Since insurance, licenses and bonds can expire and can be cancelled, homeowners should always check such information for themselves.To find more licensing information for your state, visit our Find Licensing Requirements page.
General Information
Free Estimates
Yes
Eco-Friendly Accreditations
No
Payment Options
Check
Senior Discount
10%
Warranties
Ask for details

We Services MOST all NEEDS !1

How is Enhance Renovations overall rated?

Enhance Renovations is currently rated 2 overall out of 5.

What days are Enhance Renovations open?

No, Enhance Renovations does not offer eco-friendly accreditations.

No, Enhance Renovations does not offer a senior discount.

Are warranties offered by Enhance Renovations?

No, Enhance Renovations does not offer warranties.

What services does Enhance Renovations offer?

Enhance Renovations offers the following services: We Services MOST all NEEDS !1