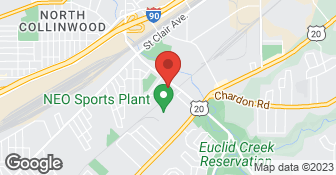 Wonder wash is a power washing company in Parma OH. We provide soft washing on siding, and roofs which include using low pressure with soap, and chemicals. This is a safe method that is a standard for the top companies in the business. Using high pressure on your home could very easily cause damage on siding, shingles, and windows. We also offer concrete cleaning and sealing which includes a pre, and post treatment using soap, and chemicals followed by a standard pressure wash with surface cleaners. Window cleaning is another service we offer both for commercial, and residential customers. Give us a call or visit our website today for a free quote!  …

We set up appointment for estimate for 9/3/14. Blue Lined called 15 minutes after appointed time explaining that they were short handed and asked if we still wanted estimate that day. I told them yes. come later when convenient, gave him directions, he told me he was only 10 minutes away on another job and would come after they cleaned up. I told him fine, we would be home the rest of the day. Blue Line never showed up and never called again.

Description of Work
Set up appointment for interior painting estimate.

Description of Work
Sat 7 13 2013 Did return initial call, but no follow through.

The owner, Phil, looks good, talks the talk. They were timely. Some of the painting was sloppy. Paint on moldings, not all areas painted such as the bathrooms, behind the toilet. The ceiling in one room is stucco textured, they painted it without the texture. Please! They fixed the areas I thought looked bad (to the best of their abilities) They did not use the same screws to put the knobs on the doors. I replaced the knobs and had an awful time removing the old screws. One of the doors fell off the track after they left for the day. I asked them to replace the screen on my patio door; was told "no problem". I had to call several times to ask where the screen was. It does not sound like a big deal, but they miss the mark on what makes a company top notch. You do not have to point out areas that are substandard or painted incorrectly, or have to call and see when they will return to finish the job. They should have suggested replacing face plates and other upgrades that are low cost, but make a world of difference in the appearance of the job. I would have paid extra. Shoulda, coulda, woulda, didn't.

. The crew was responsible and cleaned up everything at the end of the job. We were pleased with the painting that was completed.

Description of Work
Blue Line Painting painted the front of my house including all of the windows and the front door.

Good experience overall. It was a pleasure working with Phil Cairns. He responded quickly to a request for an estimate and provided a clear explanation of all the work to be done. All questions were answered in a straight forward manner. Crew arrived as scheduled and worked in a professional manner. All work areas were left neat and clean. Have given this company an "A" grade for the overall experience. The price rating was downgraded because they were definitely not among the low bidders for this job. I am hoping that the extra cost really did result in a better quality job. So far, so good.

Description of Work
Exterior staining of all trim areas of a primarily stucco residence. Included shingled dormers, soffit, garage door trim, and all gutters. All areas were power washed, loose or cracked shingles were repaired and all surfaces not to be stained were masked off. Stain was applied by spray and back-brush.

The drywall repair was done well but they missed out a lot of details on the interior painting which they did. They had to come back and redo it. I would mark them down on outdoor painting. When the owner left, the employees seemed to be very detail oriented. Their price was high for the kind of work they did. I would consider using them in the future.

Also of much importance to us is how well they pick up after themselves, taking great care to be thoughtful of the tools, the mess, and all that. By the time they are done, it simply looks how you want it to look. As a result, we also hired him for several other projects, including our exterior painting, some work in our kitchen, our front porch and our replacement windows. We have consistently been pleased with their work, their professionalism and have recommended them to others, with equal success.

Description of Work
We had a sizable crack in our living room ceiling. Phil and his team fixed the crack, blended in the ceiling stucko effect perfectly. Then they painted it. It looks so good you would never have known it was ever cracked! It looks gorgeous!

I placed a call to Blue Line asking for a quote. They returned my call the next day to schedule an appointment and came out that following day to quote. Within a couple weeks they were here painting. They are very professional, friendly and most importantly meticulous!!!! We are very pleased with their work and will definitley use them again!

Phil gave me an estimate to paint a light color over a very dark color in the L shaped living/ dining area. He included an estimate on repairing a large ceiling crack and painting the ceiling. I had seen their work at homes of two of my friends and would not hesitate to use this company. However, because of the cost I decided not to do this project at this time.

Description of Work
Estimate for painting walls and ceilings of living/dining area and paint foyer ceiling.

Description of Work
Have done much work for us over time. Most recent was master bedroom, bathroom. Painted, applied wainscoting, installed light fixtures.