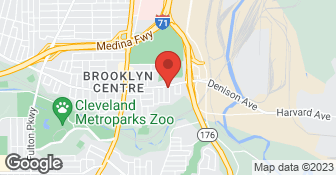 We are a small family owned & run window, gutter and power washing company.

Sorry I didn't see this second section before I typed my story above.

Description of Work
I bought 2 groupon and a 1 living social coupon back in 2012. When I called in the fall of 2012, I received a recording saying that the company's schedule was filled for 2012, but the company would honor all Living Social and Groupon coupons in the spring. I left several voice messages in the spring of 2013 and never heard back. I sent an email to the company's email address on January 3, 2014 and never heard back. I just came upon my records of my correspondence with the owner Jeff Ulery and realized that I spent $167 on coupons and got NO services. I went on their website. It has the logo for the BetterBusiness Bureau on their web page. I clicked through to the BBB to find that All Pro is using the logo, but is not in fact a member of the BBB. The BBB has notified them to take the logo from their website, but they have not.

I am writing to let you know how unprofessional Jeff Ulery, owner of All Pro Windows was with 4 separate homes and how appalled we all are that he left work at my house and house #2 incomplete and refused to correct his mistakes. I am also furious that he cancelled 2 additional window appointments on 4/28 because he would not correct the mistakes made on the first 2 houses. A company's responsibility is to make things right for the customer. We have every reason to be upset, so here is a list - showing up for a job 3.5 hours late and without a ladder or cleaning supplies, cancelling a scheduled appointment when the weather didn't even warrant it and your staff making comments that they were "too tired" to perform the work, showing up 3 1/2 hours late for the reschedule with no phone call, cleaning only 1/2 of the windows at house #2 and not cleaning any of their window sills as scheduled, charging incorrect costs for work that was not completed, and cancelling on me to rehang my shutters because of how he was treated? His staff must follow his poor service doctrine as well appearing angry, unmotivated, and talking on their cell phones rather than paying attention to their actual work. This is completely absurd. An owner of a company has the duty to correct his mistakes and work through issues with a customer versus telling the customer he refuses to do as such. All 4 houses purchased Living Social deals that were $49 for $100 worth of window cleaning and 3 of these were not accepted by Jeff Ulery, so we are now trying to recover the $49 from Living Social, but they are not refunding the money to our credit cards since the owner cancelled the appointments and refused to correct his mistakes. This was also reported to the BBB.

Description of Work
Appts were scheduled for a total of 4 houses for window cleaning, sills inside and out. All 4 homes purchased Living Social deals at $49 for $100 worth of window cleaning. House #1 was complete for the window services with a few minor complaints. House #2 was left halfway completed, but wanted payment for the full amount. His one employee showed up 3.5 hours late and without the correct cleaning supplies. When the work was left halfway complete, House #2 contacted Jeff to get the situation rectified. Jeff told House #2 that he was refusing to correct the mistakes and also was canceling the appts for the other 2 homes that also purchased the same Living Social deal. Jeff also agreed to remove and rehang shutters at my house and he refused to rehang them after a discrepancy was discovered at house #2. Jeff does not keep his word or correct his mistakes. I asked him what he could do for the others who purchased the Living Social deals and his response was to figure it out on our own. Three of the homes are in the process of attempting to recover a refund from Living Social, but they are refusing to reverse the charges on the credit cards used for payment.

Let me start by simply stating that the member is a liar. I will take each statement the member made one at a time. 1. We did not leave any work at the members house incomplete. She asked us to take down her shutters which we did, although we are window cleaners NOT contractors we did it as a favor to her and only charged her $20.00. She is only upset because we declined to re hang the shutters after she painted them. Again we are not contractors and are not qualified to do that kind of work. 2. Showing up 3.5 hours late without calling. While it is true we had car trouble that morning it is our policy to call whenever we are going to be late. Dawn set these appointments up and never gave us phone numbers for the other 3 appointments so we could not call. 3. The member says we showed up without a ladder. That is an outright lie. 4. The member says we showed up without cleaning supplies. It is true we asked the home owner for a squirt (one) of dish soap because we ran out. 5. The member says we cancelled a scheduled appointment when the weather didn't even warrant it. Another outright lie. It was the member that suggested we reschedule because of the rain. 6.The member says my staff made comments that they were "too tired" to perform the work. What she really means is she eased dropped on one of my employees private phone conversations and over heard that he was tired. Because he had pulled a double shift the day before. 7. The member says we only cleaned 1/2 of the windows at the the second house and did not clean any of their window sills as scheduled. Another outright lie. All of the windows were cleaned. It is true that the sills were not cleaned as scheduled. It was an oversight that would have been corrected had the home owner not been so rude to me when he called to tell me he was cancelling his check. 8. The member says we charged incorrect costs for the work. Another outright lie. When the home owner called and complained and threatened to cancel his $116.00 check, I told him his window cleaning that day was free. So not only did I not charge incorrect costs, the fact is I didn't charge him anything. 9. The member says we cancelled the other appointments. This is true. As a business owner it is my right to choose who I will and will not work for. 10. The member says she and 3 of her friends purchased coupons from Living Social. That is true, they purchased them from living social, NOT me. If they are seeking a refund they need to seek that from the company that they purchased from. We have been in business for over 7 years and these are by far the worst customers we have ever dealt with.

Window Genie of Cleveland West is your locally owned and operated leader in streak free window cleaning, window tinting, pressure washing, gutter cleaning and holiday lighting. Window Genie's commitment to customer satisfaction and professionalism is what has made us America's fastest growing home service franchise. With world class training and service standards, you will feel safe knowing our uniformed technicians have completed a thorough background check and will take great pride in caring for your home or office. We carry full insurance, are bonded and use only the best equipment and materials available in today's market. Estimates are always free.  …

We are Northeast Ohio's premier window cleaning and power washing company! Our trained technicians are expertly trained to provide top customer service and communicate efficiently. We also have your health in mind by wearing masks at all times.  …

How is All Pro Window Cleaning, Inc. overall rated?

All Pro Window Cleaning, Inc. is currently rated 1 overall out of 5.

What days are All Pro Window Cleaning, Inc. open?

What payment options does All Pro Window Cleaning, Inc. provide

No, All Pro Window Cleaning, Inc. does not offer eco-friendly accreditations.

Does All Pro Window Cleaning, Inc. offer a senior discount?

No, All Pro Window Cleaning, Inc. does not offer a senior discount.

Are warranties offered by All Pro Window Cleaning, Inc.?

What services does All Pro Window Cleaning, Inc. offer?

Are there any services All Pro Window Cleaning, Inc. does not offer?