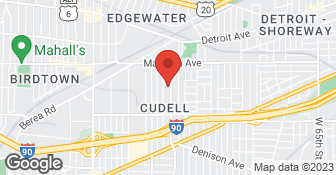 They closed a cable vent and the experience was ok.

Description of Work
I used A1.

I understand that the guy does do a lot of roofing work and he does it very well. He's a neighbor of a friend and that's how he came to me. He's a certified electrician. Ours is a very old house and it had been rehabbed a number of years ago. In the areas where he had to cut in to put the skylights for me, there were electrical wires hanging. He ended up cutting through them so that I didn't have to add additional wiring to it and he could loop it around the window. His prices are probably very competitive. He also did some work for a friend of mine who said that he was rather expensive, but he did really good work. He's very responsive. He's very punctual. He always called me ahead of arriving and gave me an idea of when he would be arriving. He would do that the night before and call me in the morning and let me know if he was going to be late or anything. I would use him again in the future. I'm going to be getting in touch with him in the spring to get some electrical work done outside.

Description of Work
I used the services of A-1 Construction in August or September. I had 2 skylights put in and roofing was a part of it because they had to put a hole. They removed the wallpaper and refinished the walls and all that. They also did the painting and took care of the plumbing problem for me.

I did not go with them because they use subcontractors for the roof work.

Description of Work
They gave me an estimate on the roof.

WOOD WAS ROTTED UNDER SHINGLES SO HE HAD TO REPLACE THE WOOD. HE WORKED VERY HARD.

We are a local, owner-operated painting company serving Parma, Cleveland, Akron and surrounding areas throughout Northeast Ohio. We specialize in residential and commercial interior and exterior painting. We also offer deck staining services, aluminum and vinyl siding refinishing and wood floor finishing. Call today for a friendly estimate at (216) 316-2929.  …

Painter Pros LLC specializes in painting, drywall, staining, lime-wash, and more! We guarantee your satisfaction, and we won’t leave until the job is done right. We pride ourselves on the quality work we provide, while delivering great customer service! Check out all the services we offer below and call -or- click to schedule a free estimate today!  …

How is A1 Construction overall rated?

A1 Construction is currently rated 4.4 overall out of 5.

What days are A1 Construction open?

A1 Construction is open:

What payment options does A1 Construction provide

A1 Construction accepts the following forms of payment: Check

Does A1 Construction offer free estimates?

Does A1 Construction offer eco-friendly accreditations?

Does A1 Construction offer a senior discount?

No, A1 Construction does not offer a senior discount.

Does A1 Construction offer emergency services?

Are warranties offered by A1 Construction?

What services does A1 Construction offer?

Are there any services A1 Construction does not offer?