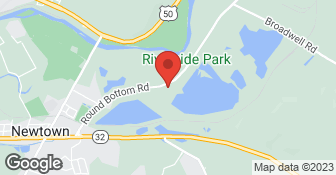 We are a landscape design, installation, and grounds maintenance contractor located in the Greater Cincinnati area. We attribute our success to the high quality workmanship we present. Staying small scale has been our choice, therefore we can present the absolute highest quality work project after project, while staying competitive with pricing. We offer a range of outdoor services, and listed below is just a small list.  …

Infinity Landscaping Solutions is Cincinnati's best landscaping company. We are determined to have the finest details in anything and everything we do. We strive to have great professionalism, customer experience, and amazing quality.  …

Wessling always does a fantastic job. They are responsive, professional, and do a great job clearing the site afterwards. Many of our neighbors have commented on how fast and unobtrusive they are, and several of our neighbors are now Wessling customers, too.

Description of Work
We had 2 small trees removed and 4 large trees trimmed.

Wonderfully. Professional to a T. Customer service is excellent and performance of the work spot on. Couldn’t be happier.

The crew came out on what turned out to be a very drizzly day. They worked in less-than-pleasant conditions all day, but forged ahead and did an excellent job overall. They were very considerate in the way that they handled their heavy equipment, and left some of it out on the street, carrying the wood debris that needed to be feed into the chipping machinery up to the street. I had called the office after receiving the original proposal and added a few concerns, after speaking with Brad, who did the initial review of the yard. Some of those trees and bushes did not have marker tags on them, but the crew was very communicative with me while they were they, and we clarified the additional work that was part of the agreement, although not clearly marked in the yard. The only issue I had is that their equipment is very large, including their stump removal equipment, so some bushes in the back yard were cut out, but I will have to find someone else to do the stump removal on those, who has smaller equipment. However, that was understood beforehand. They took time to clean up carefully after themselves and did not leave any debris in the yard. I was very pleased with their work, and in dealing with them. Sometimes maybe they are difficult to reach on the phone; one often gets voicemail, but they do get back to you, and address all of your concerns. I wish that they had called me a day or two before the scheduled service to confirm it, and to discuss rescheduling options if the weather prevented the work being done on the scheduled day. I had to initiate that call to them, but other than that the work itself went very well.

Description of Work
I needed one very large tree removed, some scraggly very old bushes removed, and some other tree and bush trimming done.

They did an amazing job. They cleaned up everything. There was not even a leaf left behind.

Description of Work
Removed a 35' tree from the front of our house.

Each time, I first met with Brad, who collected the information about the work I wanted completed, and took photos for the crew who would perform the services if I accepted the bid. Each time, I received the bids by E-mail, and confirmed that I wanted to proceed. The first time, after agreeing on one item, I changed my mind, and called back and decided to keep one of the trees I had originally requested that they remove, and they had no problem with that. For both dates, the crew that arrived worked steadily and removed all the wood that they had cut, and I had the opportunity to actually meet the crew and talk a bit the second time they were here, and was impressed at how knowledgeable and professional they were. I've recommended them to several friends who I know were looking for help for the same issues.

Very well. Several trees and very cold weather and it only took them two days. All wood and debris was removed and hauled off. Crew cleaned up behind themselves. Looked wonderful.

Description of Work
Removal of one walnut butted up to fence. One maple butted up to fence and hanging over neighbors house, one large double trunk oak, and one island of trees and brush under electrical wires.

OUSTANDINGLY!!!! I am so darn impressed with Doug Wessling and his crew. I'm still in shock. They did a prompt job with the estimate. They are very busy ( and now I really understand why) - so the work was scheduled a few months out. However, they arrived on the day they said they would, they arrived on the timing they said they would and most importantly they more than exceeded my expectations. They really did removed 12 trees in one day! They cleaned up EVERYTHING!! The place looks cleaner now then before they got here. (NEVER had that happen before!) The crew were so nice, fun and full of energy. They ALL worked the whole time. Never was it one person working with 4 watching. It so warmed my heart to see them taking such pride in their work and it SHOWED!! I would HIGHLY recommend them to anyone. Well worth the wait to get them!!

Description of Work
Removed 12 trees - some very large and difficult.

Watching, literally, thousands of pounds of tree being swung over one's house/garage by a crane is nerve wracking. However, Wessling's crew took down the tree without incident in a timely manner. Additionally, they did a great job of cleaning up the job site once they were through, including getting a guy on the roof of the garage with a gas blower to get all the debris off the roof. Day #2 was stump grinding. They did a great job of spreading the mulch from their work. They did have two small accidents, causing a bit of damage to a corner of the garage and cutting the power to the garage. That said I was super impressed that they were back at the property the very next day to fix the garage (100% back to pre-accident condition) and had a licensed electrician out to restore power. Look, accidents happens - how a company responds can make or break their reputation. Wessling responded in A+ fashion. I would definitely use them/recommend them.

Description of Work
I hired Wessling to take down a very large Ash tree in our backyard, haul away the pieces and grind down the stump of the tree along with a couple of other stumps on the property. This was a two day job. Day #1 was taking down the tree, day #2 was stump grinding. A crane was used to take down the tree.

Arrived promptly and had permission from neighbor to use his driveway for easier access to the tree. They were meticulous in putting down plywood strips along the drive way and any yard areas to protect the property. Worked efficiently with a crew of about five, very polite, and did an excellent job with the clean up.

Description of Work
Removed manually a maple tree up against the rear of the house, there were cables in the tree and they hauled all wood, brush, and debris from the site. Also removed a 3 ft section of vine at the base of another maple tree at the end of a driveway and hauled away all debris.

Wessling Tree Service is very good. I'm happy with them. It's a very small company. They're hard to get a hold of and hard to schedule because they're so small. When the arborist came, he found out there was a hornet's nest in the tree. He came back at 10 o'clock at night while the hornets were in the nest and destroyed the nest. He came back the next day and trimmed the tree. I'm pretty happy with that. They were very reasonable. The dedication, the astuteness to recognize there was a hornet's nest and his willingness to come back and take care of it stands out. Responsiveness was a little bit slow.

Description of Work
I insisted on the arborist.