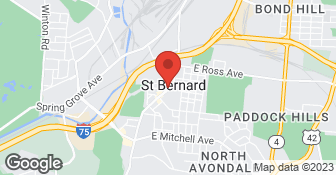 They did a wonderful job, they were a little expensive but it was worth it for the quality of the work.

Description of Work
They replaced the roof on the property I had.

Walter St. Clair has responded several times to make repairs to shoddy roof and gutter work done by a previous contractor. They always put my mind at ease, respond quickly, thoroughly explain the scope and cost of work and how much time it will take, show up when promised, and complete the work for a fair price. No work they've done has ever had to be revisited. I just wish I'd used them for the initial roof replacement.

Jerry St. Clair came to our house to review the problem and quickly provided an estimate via e-mail. I responded and agreed to his company doing the work. Since then, he has not returned e-mail or phone calls to discuss the work and the schedule. This has gone on for two weeks as of today.

Description of Work
We have a leak that is either coming through the roof or a window area.

From the time Jerry came out to take measurements and provide an estimate to his last day on our job he was nothing but professional, friendly, down-to-earth and knowledgeable about the products his company offers and the work they did for us. We would not hesitate to hire them again or to recommend them. His sister, who is his receptionist, and his son, who delivers samples are both great to deal with as well. They provide excellent customer service and truly seem to live by " we're not happy, till you're happy". I talked to the receptionist several times asking if samples of shingles and siding in the colors I was considering could be delivered. I changed my mind a few times which resulted in a few trips to my house to deliver the samples. Both she and Jerry's son were friendly, patient and accommodating throughout. They are all great people to do business with and our house looks fantastic!

Description of Work
Jerry and his crew replaced our roof, our aluminum siding with insulated vinyl siding and our gutters.

Our old skylight was leaking. I called Molloy Roofing since we had used them on a previous home. I was promised to have at least an estimate within 2 weeks. Two weeks came and went and I was told they should have someone out within the following week. After leaving another message with them and no return called I contacted Walter St. Clair Roofing. Jerry St. Clair (Son) was here within 3-4 days, gave me an estimate which I accepted. I was told it would be ordered and installed within 6-8 weeks. They installed it within 7-10 days! What a great company to work with! Molloy Roofing called yesterday to set an estimate date/time for the job. They were told that we went with an extremely prompt and reliable company instead and they (Molloy) should learn a thing or two from them about customer service & promptness. I would never use another company after having Walter St. Clair Roofing do this job. I am extremely impressed and satisfied!

He did a phenomenal job finding some issue with roofing work that had been done by somebody else.

Description of Work
He did some inspections for me.

After I called their office, Jerry St. Clair came to our home the next week to give us a bid which was then emailed to me a few days later. After I called back and except the bid our job was scheduled to be done two weeks later. It took two of his employees approximately three hours to do the job and when they finished they left the place spotless. Since then we have had some good hard rainstorms, the leaves are falling now, and my gutters are functioning just fine! I will definitely call Walter St. Clair Roofing back again in the future if we have anymore work to be done.

Description of Work
Cleaned out gutters, replace nails with screws where gutters were pulling away from house and cover gutters with aluminum gutter covers on a 3,200 sq. ft. home.

We had another company install the roofing and gutters. There were a lot of problems with the gutters and they were leaking. One gutter had even fallen off. The previous company was unresponsive. It was almost an emergency when we contacted Walter St Claire and they were able to come out the same day. They completed all of the repairs and even inspected our roof as well. They did a really good job at a fair price.

Description of Work
They fixed several gutter problems where they were leaking.

Crew did an excellent job. Knew what to do & worked well together. I am very pleased with my new roof.

The work went exactly right, two guys on Jerry crew came out, they did exactly the work described above, they even crawled into the attic and hooked it up, something they dont normally do, since I had just had knee surgery. Jerry brought them the vents to place and checked over the job. The house sold a month later, their inspector noted the chinmey brick on his report, we sent sent them the Walter St.Clair invoice and they were satisfied with that. If Jerry hadn't mentioned the chinmey to us up front, we would have been scrambling to get that done by the closing date.

Description of Work
I wanted my roof to be 'right' when my house went up for sale, I knew I needed a roof vent cut in for the bathroom fan and I didnt like how the area between the sunporch and the main roof looked. Jerry came out, he was great, professional, friendly. He gave me options, on what he found needed to be done. I missed completely that that the kitchen fan didnt have a roof vent either, and that the cap on the chimney was cracked. They installed two vents, bath and kitchen, and installed rubber membrane over roof transition from sunporch to house roof where it was damaged. Jerry recommended, they installed, a heavy rubber cap over the cracked concrete chimney cap and put a sealer on the chimney brick..

LAUGH AT MY NAME AND SMILE AT OUR PRICES CHIMNEY SPECIALIST Owner operator with over 30 years of experience. We have the experience and dedication to bring your dreams to reality! We guarantee your satisfaction because we do the job right the first time. ALL repairs guaranteed for one full year Call or click to schedule a free estimate today!  …

WALTER ST CLAIR ROOFING is currently rated 5 overall out of 5.

No, WALTER ST CLAIR ROOFING does not offer eco-friendly accreditations.

No, WALTER ST CLAIR ROOFING does not offer a senior discount.