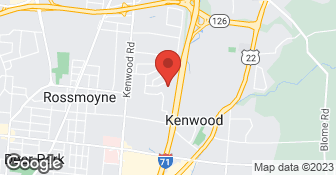 Handyman services from A to Z. If your home has a problem I can fix in a timely and professional manner. Also adding kitchen and bath remodeling. Plumbing issues small and large, certianly worth a quote. Award winning.

It was poor. The work was sloppy. He didn’t end up using all the hours. The work was not good and I ended up having to have it redone. I would not recommend them.

Description of Work
They re-caulked in two of our bathrooms.

He was only here for about an hour and we didn't use the other hour. He did get done what I wanted and he got it done well though.

Description of Work
I purchased a $75 deal for 2 hours of plumbing service. He took care of a few things for me.

I remember that they came and were very prompt and professional. I know I was pleased with them because I called them back out a year later for another cleaning.

Description of Work
I purchased a $75 deal for a whole house gutter cleaning and roof inspection.

This was an Angie's Deal and I called Mr. Heitmeyer and made the appointment but he did not show up. I called again and he rescheduled (he didn't have the first appointment on his calendar). He was late for the second appointment and then said he did not have the right color of grout for my tile and he would have to come again. Since I didn't want to take another day off of work, I offered him the grout powder from when the tile was installed but he said it would not work. He then found some he had in the truck but, when wet, it was darker than the original and never faded. He also caulked around the tub. Finally, he asked for $25 for a gas surcharge. Less than a year later, I re-did the caulking (it was separating from the tub and tiles) and the grouting (it still had dark patches) and my efforts looked a lot better than his "professional" work.

Description of Work
Grouted and caulked my bathroom tiles and tub.

When I discovered that the Big Deal was about to expire I called for service and left a message. Heitmeyer never returned my call.

I called them and left a message and never heard back from them.

Description of Work
I purchased the Big Deal for kitchen & bathroom caulking and grout restoration.

The service went well. My husband was pleased with the service. It was a very fair price for a good amount of work. The outdoor faucet is broken under the deck and we think that is due to the extreme winter cold and has nothing to do with the service.

Description of Work
This was a Big Deal for $75.00 for 2 hours of plumbing service. He replaced plumbing underneath the deck for the hose. We had replaced the initial copper with PVC and it still broke after that under the deck. He did that replacement.

Fast, knew exactly what to do. Told me about each step of the process. Awesome service!

Description of Work
Fixed 2 bothersome leaks in Kitchen and Bathroom

They were very helpful and completed the job. I would use them again.

Description of Work
I bought a Big Deal for $75 for 2 Hours of Plumbing Service.

They did a fine job and was pleased with their services. I would use them again.

Description of Work
I hired them to perform some plumbing repairs.

My experience was fine. They were able to come out to my home when I was not there. They left something on my door letting me know they had come by to do the work. Scheduling went well and I called them to schedule the appointment. The results are good of the gutter cleaning.

Description of Work
I purchased the big deal for $75 for Whole House Gutter Cleaning AND Roof Inspection.

It was fine, he did what we requested, but he was very fast and we expected more than just an hour of work for the deal.

Description of Work
He did some caulking around the tub & shower.

I was at work that day and my babysitter informed me they had been there. Since I had not scheduled the work, I wasn't there to supervise and determine that the work had actually been done. I also was planning to have to work done later in the year, not when they just showed up to do the work.

Description of Work
I had purchased the Angie's list big deal for gutter cleaning, but they just showed up one day without my calling to make an appointment for the work.

They did a nice job. He did pretty good work and he was on time.

Description of Work
I purchased a Big Deal coupon from Heitmeyer Handyman for handyman services.

Three hours of bathroom grout and caulk. Job was done well. My wife thought he was professional. Problem had to do with scheduling. He was not good about following through and keeping his original appointment or returning calls. Summary: good work, pleasant person, but some problems on the scheduling/dependability end.

He did a good job the weird thing was that he just showed up without ant notice and told my wife who he was and just starting cleaning the gutters then left.

Description of Work
Cleaned out the gutters

Very professional service. I'd use them again.

I would have been better off hiring a professional plumber than the handyman.

Description of Work
The handyman fixed some leaks in the faucet

I tried an Angie's List Deal - 2 hours of plumbing for $75. The man was not a plumber so he looked at my problems, spent two hours, was very nice and professional. However, he was unable to fix anything and suggested that I get a new faucet. More disappointed in Angies List than I was in him. I trusted Angie's List to sell accurate services, not handyman services under the name of plumbing.

Description of Work
Looked at some leaks that I had.

one quick call and he arrives at the earliest time possible, efficient work, excellent clean up.

Description of Work
cleaned the gutters

We had purchased a big deal for the service. I wasn't thrilled with that service. He did an okay job, but I wouldn't rave about him.

Description of Work
We used Heitmeyer Handyman. They came out clean out the old caulk and recaulk around the bath tub.

Very disappointed in what I received. Most disappointed witht he fact he did not call ahead of time and that he never returned with an estimate for more work.

Description of Work
He just showed up without calling first. He came at lunch when we (husband and grown children) were eating lunch on the deck. I was expecting someone to actually clean out the gutters, not blow them with a blower. I also asked if he installed gutter protection and he said yes. I asked for an estimate - but he never returned. Would not use them again. Great price - lousy service and follow-up.

I had purchased a package for grout and caulk repair with the hopes that I could get the grout in two of our bathrooms cleaned. The tile was pure white and the grout had yellowed over the years making it very unsightly. Mike made an effort to help but the steam cleaning unit he rented did not make much of a difference on the discoloration. I appreciated the work Mike put in on this project but in the end I had to hire another contractor to come in with a chemical product to get the grout back to its original color. I think if I had needed to have a tub or shower re-caulked, Mike would have done a fine job.

Description of Work
Attempted to clean the grout lines in bathroom tile floor.

It was effortless. He came and fixed what I needed and was gone. No issues.

Description of Work
Renewed the caulking

They did an excellent job. They were polite and professional. It was a positive experience.

We are a Veteran owned, full service landscape company located in Amelia Ohio. We provide quality services for our Commercial and Residential customers. No job is too large nor too small. Let us design and built your dream outdoor living area. Whether its a paver patio area or beautiful water features, we will meet with you and provide a free estimate. Some of our services include lawn maintenance, installation of plants, patios, retaining walls, and water features. We also do mowing, shrub and tree trimming, leaf removal and snow removal. Call Jayce at 513-702-1543  …

When you want someone to provide you with quality painting services at an affordable price, turn to Sharp Paintworx! We are licensed and insured painting contractors in Cincinnati, OH who are able to handle any painting project. Before we begin any job, we provide a consultation to go over colors and answer any questions our clients might have. Each job provides timely and precise work, from the moment we get there to prep the area you want to be painted to the time we clean up and leave your home or business spotless. Our team of painters will bring their own paint, as well as painting tools, so our clients never have to worry about a thing. If you are interested in our services, please contact us.  …

How is Heitmeyer Handyman overall rated?

Heitmeyer Handyman is currently rated 4.1 overall out of 5.

What days are Heitmeyer Handyman open?

No, Heitmeyer Handyman does not offer eco-friendly accreditations.

No, Heitmeyer Handyman does not offer a senior discount.

Are warranties offered by Heitmeyer Handyman?

No, Heitmeyer Handyman does not offer warranties.

What services does Heitmeyer Handyman offer?