With Angi since February 2018 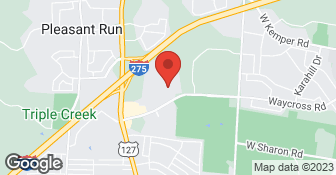 We are a company that specializes in residential and commercial painting, drywall, and carpentry. We also specialize in Water damage, fire damage, property cleanup, smoke and odor damage, wind damage, and mold. We also serve reconstruction to property. We are licensed in painting, water damage, drying, bacteria remediation (mold growth) and Lead renovation....

They were the only company able to come out right away, which was late at night, and which we really appreciated. So an A for responsiveness. For the actual work, I would only rate them as a C. Project manager (and owner I believe) did not provide me with a lot of confidence that they knew what they were doing, but my insurance co. confirmed that their step by step process was correct, which made me feel better. The team removed saturated items but it was not done with a lot of care, and no protective covering was put over the carpeted landing area that they traipsed in and out of. They indicated they would clean that area, but later on I found out that would be a chargeable cost. Regarding wet items moved - a week later on I found some boxes with water still in them. They left area rugs on top of my wall to wall carpet which caused the underlying carpet not to dry well. The drying took twice as long in the basement as originally estimated, so the daily charges increased the cost. I was provided a detailed invoice of all the charges however I don't know if these were legitimate or reasonable as this had never happened to us, and in these circumstances we were unable to obtain other quotes. However, they were measuring the humidity to validate in the drywall and room, so I assume that their dry time was correct. Follow up appointment times for checking stuff - they were always late, however they usually notified me. I did not use them for any restoration work, as I didn't have a lot of confidence that they would be skilled to do the work. They removed some area rugs to try and clean, but they never did clean them and I had to call multiple times to get them returned. The crew was very polite which I appreciated. I don't think I would recommend them or use them again - overall I would give them a C to C-.

NIGHTMARE! In one word, “NIGHTMARE”. DO NOT let them in your home unless you want to be stressed out and have a 2 week job take 3 months. Situation: Downstairs of a bilevel flooded. Insurance didn’t cover it – was that part of the problem? Fortune’s services included water extraction, drying of lower level, removal of carpet and pad, demolition of baseboards and parts of lower drywall. After that, all of the above was supposed to be “restored” . The company was prompt when called for “emergency (overtime hours) night services when the flood occurred from a storm. Workers knew how to plug in machines and use them to extract water. Workers knew how to plug in machines that dry everything out. Workers knew how to come for a couple of minutes and check to make sure equipment was doing its jpb – drying. Workers knew how to demolish. After that – the problems began. The company abandoned the job for 3 ½ weeks with no call, text, email – NOTHING. We had to reach out to them. All we got were excuses. Days/times were scheduled numerous times after that, involving us taking off work, and then NO ONE would show, with no communication that plans had changed. Sometimes workers were “dropped off” and sat in our garage more than they worked. The “workers were different each time and were UNSKILLED ( We have numerous pics to show what we went through). Workers caused DAMAGES to our home and when inquired about – no one would address the issues. DECEPTIVE – told us things verbally and then a few months later, we would receive a new invoice with charges for services that never were provided and/or agreed upon. NEVER CLEANED up after themselves…even left their food and drink garbage for us to clean up. We lived in FILTH for 3 months. We finally said enough is enough and hired others to finish the job and clean. The list goes on…finally settled after 3 months and a lot of pictures and documentation. Bottom line – If, after reading this, you decide to take a chance, get a contract (all he gave us was an invoice – that kept changing). Get EVERYTHING is writing. DOCUMENT hours they are there, equipment used, etc. Be PRSENT and watch everything they do…or just move on and find a reputable contractor. This one isn’t!

First and foremost, I am only rating the interior painting part of this business, not the rest of the services offered by this business. Bryan was quick to respond and available for work. His team arrived on time most of the time but that is all I can say about the good things. The finish painted job was not professionally looking. I asked for walls to be prepped and holes filled and it was not done. They painted over everything, dust, holes, nails, caulk, etc. Bryan decided to spray paint most of the rooms, which I was fine with since we did not have any furniture in, but it took two and a half weeks to paint two bedrooms, the living room (about the size of two bedrooms), the stairs on three levels, and the ceiling in these areas. The few areas they decided to roll paint instead of spraying, there were paint drops on the floor and baseboards. Due to the spraying I found the walls dusty, which I had to wipe down as they did not bother cleaning the walls. It was not my first time hiring a professional to paint but the result was not there. If you are looking for someone to add a new coat of paint on your wall and do not really care about the end result, Bryan is your guy. Otherwise, choose someone else as Fortune Restoration and Reconstruction need more training on how professional painting is supposed to be done.

Overall the service was great I would hire this company again. I am very satisfied with the look and feel of my new kitchen. That was one of the best projects I have had completed. Fortune Restoration gets an A in Quality of work and professionalism as well as cost. The picture shows a before and after the one on the right side is before with the oak color cabinets.

It was excellent. Wonderful estimate and a wonderful job. Work was done in a timely fashion. Cleaned up after themselves. Friendly service and very professional.

Description of Work
Painting and refurbishing some things

We are currently booking work for the new year, interiors and exteriors schedule early we fill up fast.  …

Morris Home Improvements is an interior/exterior home and commercial painting company within the greater Cincinnati area. We work with only the best quality paints and stains to provide your home or business the upgrade it deserves. With fair prices and quality painters, you can be sure the job is completed to your satisfaction.  …

I have been in business for 25 years. The bulk of my business is residential painting. I have 3 quality painters who have been with my company for at least 6 years each. I oversee all jobs personally, and keep in contact with each client. My bids include all materials and equipment needed to keep the jobs running on schedule. All estimates are free of charge and are completed by me. Each client has my contact numbers to reach me if needed. My company's goal is to provide top custom quality at affordable pricing. Our motto is "If it doesn’t move, we will paint it"!  …

Fortune Restoration & Reconstruction is currently rated 3.2 overall out of 5.