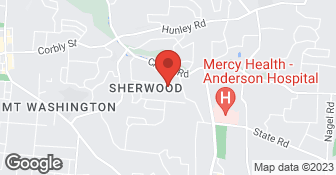 At Ford and Son Roofing we are family owned and opperated since 1945. We have the best labor warranty in cincinnati! between 25-30 years on all newly installed roof systems!!! Please check out our class "a" rating with the bbb!! Family owned. Additional phone - (513) 231-1600....

Went excellent showed up on time clean up each day. Took their time made sure job was done correctly. Friendly employees polite. Would recommend again.

The skylight was ordered and came in faster than was expected. His employee installed it in a little over two hours and showed me how to operate the blind. If you want to, you can program it to open and close at selected times each day. The blind is accordion pleated and should help to keep the cold out at night during the winter.

Description of Work
The Velux skylight that I've had for 37 years was leaking because the seal had broken and the frame was starting to rot. Charlie Brown, the owner of Ford & Son Roofing, came out to look at it. He recommended that I get a new Velux Energy Performance Skylight with a solar powered blind, that was eligible for an income tax credit. He also checked over my roof of 14 years, that his company had installed, and told me that everything looked great.

I went as expected.

Description of Work
The company installed a new roof was installed.

ABSOLUTELY PERFECT!!!!! The shingles and such were delivered before expected time frame, then the crew arrived as expected and worked expeditiously from approx. 0900-1700 then returned @ 0730 the next day and were completely cleaned up as if they had never been there before 1000. Couldn't have asked for a more smooth transaction.

'harlie responded within a day or so and I had he pleasure of him even dropping it off at my house (so no trip needed to go get it.) Saved me hassles as Kelly Roofing didn't bother to call back. Solved my issues via Ford and Son promptly.

They did really well. I thought the price was fine. I checked around I think it was comparable. They were very responsive. I would use them again.

Description of Work
Ford & Son Roofing did my whole roof.

They are very nice and did what they were supposed to. They did excellent work and went above and beyond.

Description of Work
They reshingled my roof and cleaned my gutters.

The workmanship looked good from a distance, but pre-existing problems with the roof were not corrected as planned, and subsequent damage to the sheathing by the fork lift was incurred and some short-cuts taken. If I hadn't come home for lunch to inspect their progress, they would have put on the incorrect air vents. After only eight years a leak occurred. The owner ignored several calls to rectify the problem. Finally, after repeated calls that went unanswered, he sent out someone with a chaulking gun but that did not correct the problem. Their warrantee seems to be a joke. I have given up asking them for help and now face getting a new roof already.

Description of Work
A complete reroofing was performed of a residential roof with demensional shingles.

Description of Work
They checked out my roof.

A Company build as a reminder that customer service isn't dead. With over 20 years of experience I myself have done pressure cleaning on anything and everything you could think of. From giant decks overlooking the river, to your regular driveways in subdivisions, to fully cleaning out massive restaurant kitchens. I'm also available from sun up to sun down almost guaranteed to meet the customers times needed.  …

Ford & Son Roofing is currently rated 4.8 overall out of 5.

No, Ford & Son Roofing does not offer eco-friendly accreditations.

No, Ford & Son Roofing does not offer a senior discount.